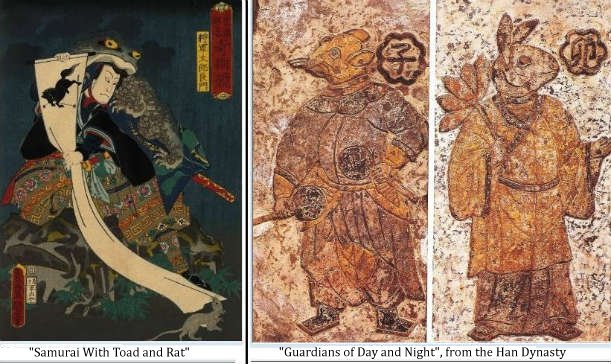 The Rat in Eastern symbolism is associated with the Night.  According to Cirlot...

A Dictionary of Symbols – J E Cirlot
The rat occurs in association with infirmity and death.  It was an evil doing deity of the plague in Egypt and China

But this would be to simplify things a bit too much.

The Rat in Chinese astrology, for example, is the first sign.  Unlike the Western or Indian zodiacs, the Chinese zodiac signs are not related to constellations, in that the constellations were not named after the Signs as they were in other systems.  Instead, Chinese astrological signs operate on cycles of years and lunar months. A particular feature of the Chinese zodiac is its operation in a 60-year cycle.  There are still twelve signs.

The Rat in this astrological system is associated with mid-Winter and North.  We now need to go to the section on the Four seasons and the hours,  - Night, mid-Winter and the North occur and what we see is that the rat is a symbol of Rebirth – the dark night of the soul.  In essence it gains its reputation because it is associated with a traumatic event in the spiritual cycle.

In effect death is not death, although it has to be said that it does feel like death if you are going through it.