The ‘Morris’ and a number of related dances  may have been imported direct from Moorish Spain.  They are traceable to Sufi fraternities much further back in time.  The riding of a hobby horse is also part of sufic ritual and was once a part of Morris dancing

C J Sharp and H C Macilwaine – The Morris Book 1907
The Morris, then  -once also the Moresc - of England; Le Morisque and Morisco of  France; the Moresca of Corsica . . .  is in all reasonable probability Moorish in origin: never mind if in our own country it is become as English as fisticuffs. . . . Holland, as is told by Engel, was infected too; industrious research, in fact, will probably show that the Morris in some shape or other was known throughout Europe, and beyond. As for the date of its introduction into England that is impossible to state with certainty; but most authorities point to the time of Edward III. Maybe when John of Gaunt returnd from Spain is probably the earliest when Morris-men were seen in England.

The dance incorporates a number of symbolic objects – bells, and in the old days drums and a hat with a plume on symbolising the opening of the crown chakra  - crown.

The Sufis – Idries Shah
The Sufis … have produced great theologians, poets, scientists. They accepted atomic theory and formulated a science of evolution over six hundred years before Darwin…….
We wear their clothes (shirt, belt, trousers); we listen to their music (Andalusian, measured music, love songs); dance their dances (waltz, Morris dancing); read their stories (Dante, Robinson Crusoe, Chaucer, William Tell); employ their esoteric phrases ("moment of truth," "human spirit," "ideal man"); and play their games (cards).
We even belong to derivations of their societies, such as Freemasonry, and certain chivalric orders.

but then of course Sufis are Rosicrucians are Shakers and Quakers and ......... all one in the spiritual world. 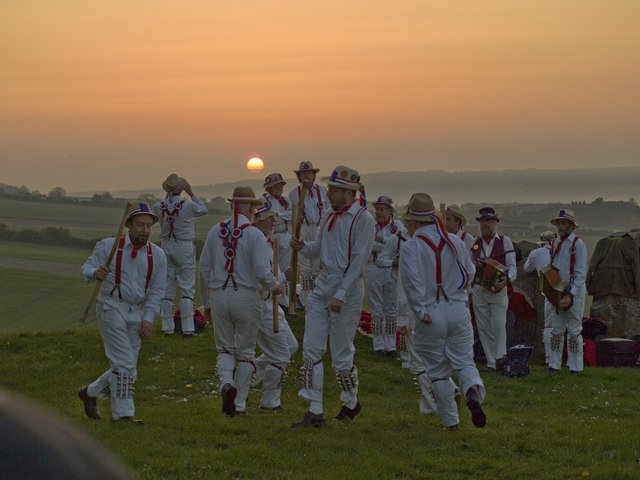