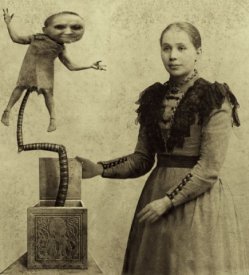 A jack-in-the-box or jack-in-a-box is a children's toy. It consists of a box, and a handle which you turn and it plays a tune.  At the end of the tune there is a "surprise" when the lid pops open and a figure, usually a clown or jester, pops out of the box. “Some jack-in-the-boxes open at random times when cranked, making the startle even more effective”.

The toy is symbolically another reminder of spiritual truths in the same way that the circus is, trapeze, lion tamers, fire eaters and so on.  The box is square and represents the Earth.  The clown or jester is the shaman or magician able to zoom out of body at the sound of songlines.  It is thus a celebration of out of body or ecstatic flight.

Given the somewhat vicious battle that took place in the Middle Ages between established religions and the older shamanic or spiritual beliefs, one would expect that the Church was none too happy about the toy.  And indeed this is exactly what happened. In French, a jack-in-the-box is called a "diable en boîte" (literally "boxed devil"). 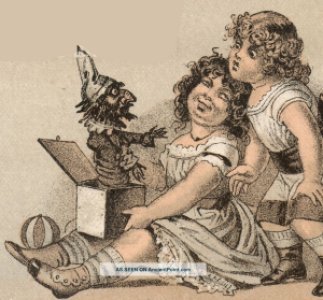 There are some incorrect theories being espoused about the origins of the toy.  One, for example, is that it somehow relates to the 14th century English ‘uncanonised saint’ [whatever that means] Sir John Schorne: