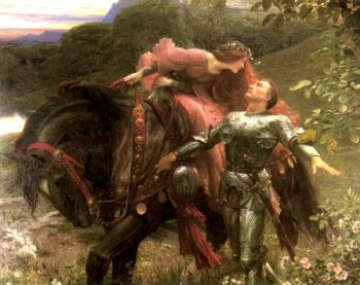 Many myths and legends contain oblique references to Fays.  Fays were human, but they could act out of body and thus achieve actions within the spirit world.  A fay was thus a highly gifted female shaman.

A number of the stories in the Knights of the Round Table include Fays.  The Lady of the Lake, for example, was a Fay.  But here there is much use of symbolism with castles, palaces, lakes, islands and so on implying all this was an out of body experience.

In Perce forest, Sebille la Dame du Lac, whose castle was surrounded by a river on which lay so dense a fog that no one could see across the water, though not called so, was evidently a Fay.  The fortnight that Alexander the Great and Floridas abode with her, to be cured of their wounds, seemed to them but one night.

The symbolic references are quite clear here – castles, water and perhaps the most important the loss of any sense of time. 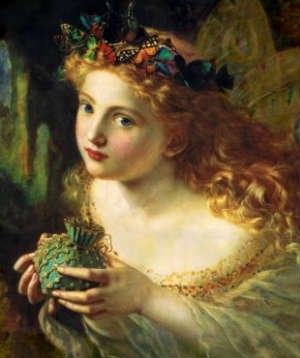 "Fair Face of Woman" by SophieAnderson

One of the better known female shamans was Morgan Le Fay.  In the following extract, the indication that Morgan le Faye is a powerful female shaman is very clear, again the allusion to a castle, the presence of the sea [water symbolism and oceans] as the means of getting to the castle, the very clear reference to paradise, and the use of flame symbolism.

The barque on which Ogier was, floated along the sea till it came near the castle of loadstone, which is called the castle of Avalon, which is not far on this side of ... paradise; … and where was Morgan le Faye, who, at his birth had endowed him with great gifts, noble and virtuous.