Trifolium pratense (red clover) is a herbaceous species of flowering plant in the bean family Fabaceae, native to Europe, Western Asia and northwest Africa, but planted and naturalised in many other regions.  It has become naturalised in many temperate areas, including the Americas and Australasia as an escape from cultivation.  Trifolium pratense is the national flower of Denmark and the state flower of Vermont. 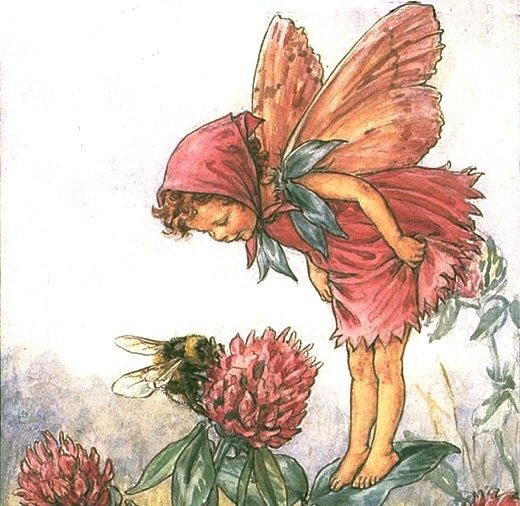 The Complete Poems of Emily Dickinson
To make a prairie it takes a clover and one bee
One clover, and a bee,
And revery.
The revery alone will do,
If bees are few.

Red clover is a herbaceous, perennial plant, variable in size, growing to 20–80 cm tall. The leaves are alternate, trifoliate (with three leaflets sometimes four), each leaflet 15–30 mm long and 8–15 mm broad, green with a characteristic pale crescent in the outer half of the leaf; the petiole is 1–4 cm long, with two basal stipules that are abruptly narrowed to a bristle-like point. The flowers are more pink than red and can vary from very deep pink to quite pale in colour depending on the soil.  The flowers are about 12–15 mm long, produced in a dense inflorescence, and are mostly visited by bumblebees and butterflies. 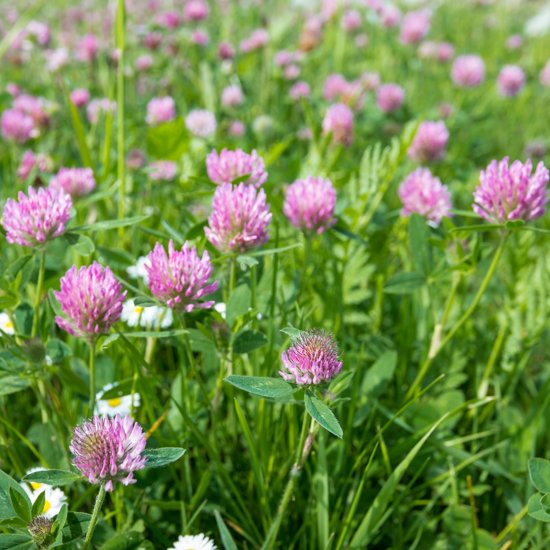 Trifolium pratense is hardy to zone (UK) 6 and is not frost tender.

It is in flower from May to September, and the seeds ripen from July to October. The flowers are hermaphrodite (have both male and female organs) and are pollinated by Bees, and the lepidoptera species of moths and butterflies.

It can fix Nitrogen.

“It is noted for attracting wildlife”.

The plant is able to grow in light (sandy), medium (loamy) and heavy (clay) soils, and it prefers well-drained but moist soil.  It can grow in nutritionally poor soil, but will not tolerate shade. Suitable pH: acid, neutral and basic (alkaline) soils. The plant can tolerate strong winds but not maritime exposure. 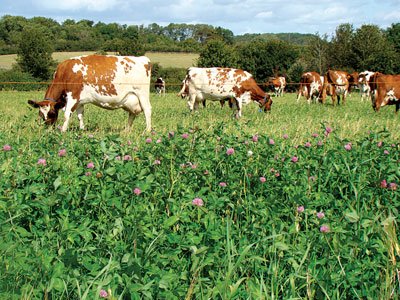 Red clover is widely grown as a fodder crop, valued for its nitrogen fixation, which increases soil fertility. For these reasons, it is used as a green manure crop. Several cultivar groups have been selected for agricultural use, mostly derived from T. pratense var. sativum.

Nutritionally, it is far better than grass and milk yields improve with a mixture of clover and grass.  The reason for this may be partly due to its mineral and vitamin content, but in addition, in ideal conditions for the plant, good moist soil and plenty of space without interference, it produces phytoestrogens that are agonist – that is estrogen like substances – that increase the health and fertility of the cows.

In less than ideal conditions, for example, dry soils or shade in which the plant is not thriving, resulting in poor stressed plants - the reverse may be true and it will produce antagonistic action.  Fertility will drop and milk yield go down. 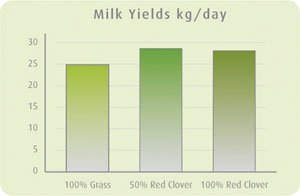 To understand this you need to understand that a phytoestrogen, is a plant capable of affecting the estrogen levels in animals and thus to alter their fertility and breeding cycles.  And again, to understand this, we have to look at it from the plant’s point of view, for example:

Phytoestrogens, largely formononetin and genistein, are produced in the leaves of stunted desert annuals in a dry year. When ingested by California quail, these compounds apparently inhibit reproduction and prevent the production of young that will not have adequate food. In a wet year, forbs grow vigorously and [these] phytoestrogenic substances are largely absent. Quail then breed prolifically and the abundant seed crop carries the enlarged population through the winter.  PMID:  1246602 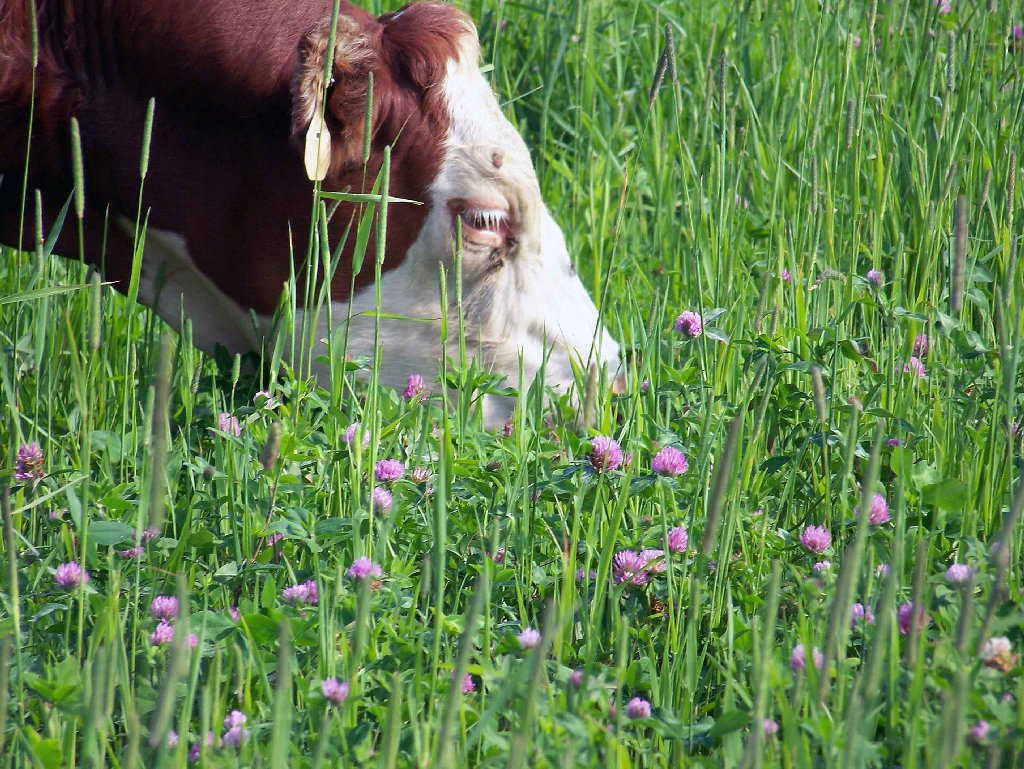 Bulls and cows will be affected differently......

Thus plants regulate the wildlife they depend on to spread seed by altering their reproductive cycles via these chemicals. It is possible that far more plants we are unaware of actually have this ability, but because we irrigate them and fill them full of fertiliser, we don’t realise it.

It is thus an explanation for the varying effects of various foods.

In the 1940s and early 1950s, it was noticed that some pastures of red clover had phytoestrogen-rich plants [ see references below].  The plants that did, had an effect on the fecundity of grazing sheep.

There are phytoestrogenic chemicals that are estrogenic – estrogen like and thus may help in fertility – as well as antiestrogenic – inhibit or antagonise the production of estrogen and thus reduce fertility. 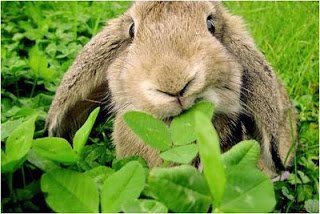 Depending on where you or the sheep or cattle are estrogenically – in balance, too much or too little, then plants with phytoestrogens have considerable use in restoring balance.

If you put a bull on a rich estrogen promoting clover field, it may actually reduce its fertility.  Give a man a cup of red clover tea and you may do the same. 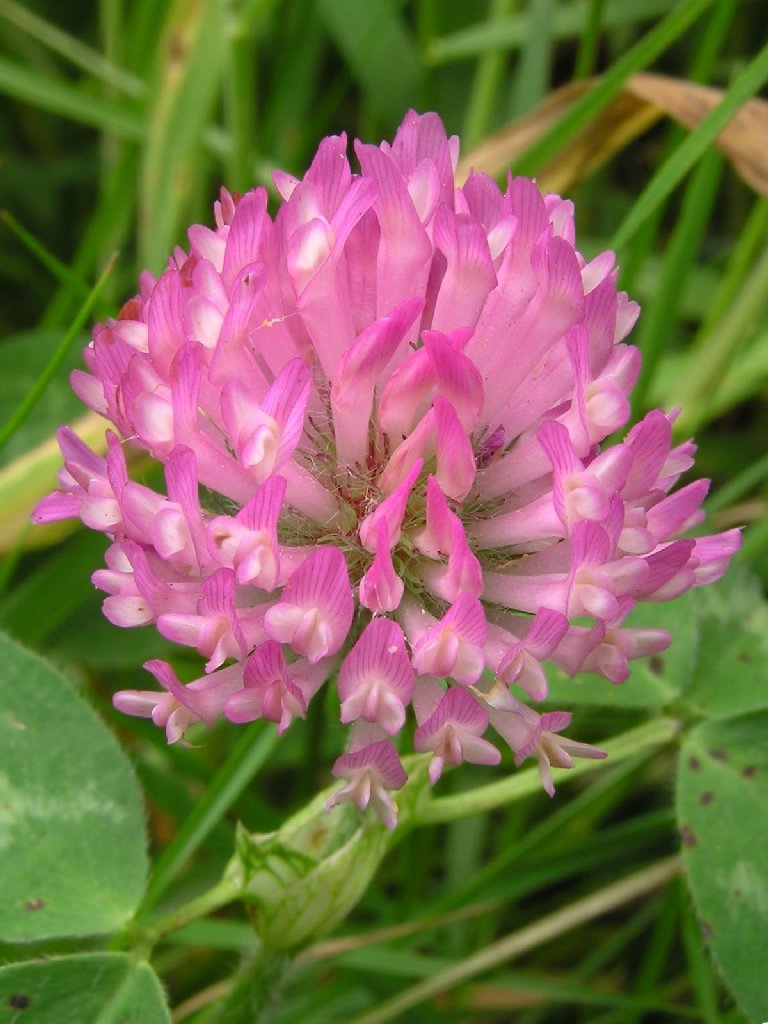 Trifolium pratense (TP) is one of the most common herbs for the relief of menopausal symptoms, but the thinking behind this has clearly not been worked out properly.

The menopause can produce wild swings in estrogen levels.  There are thus a number of variables that need to be known if red clover is used to help with estrogen imbalance.

Estrogen affects so many things – skin, hair, eyes, body shape, bone mass etc, that red clover will, if it has a high level of estrogens, affect all of these.

The key is balance.

Those people selling concentrated extracts of red clover, may actually be selling death, because  Hyperestrogenism can cause weight gain, liver disease, severe immunological reactions leading to skin problems and other so called auto-immune diseases where the body over-reacts, 'thick blood', strokes, heart problems and various forms of cancer - breast, uterine and endometrius being the three main ones.

Please read the section on estrogen imbalance to understand this tricky area.

Red clover flowers, fresh or for example as a tea grown in conditions that are known to produce specific phytoestrogenic content will be safer and may help a great deal.  If they have a reasonable amount of estrogenic content and the person is suffering from Hypoestrogenism, for example is way past the menopause and thus through the terrible cyclical swings, but suffering from anxiety, osteoporosis, glaucoma, depression, skin deterioration, cataracts etc, or for example they are sufferers of Amenorrhoea – no periods, or Infertility, they may benefit from sipping red clover flower tea.

They may further benefit from its apparent sedative and relaxant properties.  The following study may be true or false, it may be wishful thinking, but it is still interesting.

In this study, we investigated the affinity of TP at the mu- and delta-opiate receptors. We found that a clinically used TP extract bound to the mu-opiate receptor with a high affinity (K(i)=9.7+/-1.6microg/ml). The same extract was also found to have affinity at the delta-opiate receptor with K(i) of 15.9+/-2.4microg/ml. These results for the first time suggest a potential new mechanism of action of TP at the opiate receptors. Given the essential role of the opioid system in regulating temperature, mood, and hormonal levels and actions, this may explain in part the beneficial effect of TP in alleviating menopausal symptoms.

You must know where you are hormonally before you use the plant.  You must know the contents of the plant chemically, or at least where it was grown and the conditions under which it grew

Rather than use Dr Duke's phytochemical database in this analysis, we will quote from a recent paper, whose summary is very useful:

The preformulated extract was composed of 35.54% isoflavones, 1.11% flavonoids, 0.06% pterocarpans, < or =0.03% coumarins, and < or =0.03% tyramine.
Daidzein, genistein, formononetin, biochanin A, coumestrol, and naringenin were estrogenic in the AP assay, and all of these, except formononetin, bound to one or both ERs. ....
The major and minor chemical and active estrogenic components of a preformulated phase II red clover clinical extract were identified, quantitatively measured, and the final capsule doses were calculated.  PMID: 16566672

The key to understanding this paper is that some of these chemicals - notably daidzein, genistein, naringenin and possibly others [this is early days in research]- can be estrogenic or antiestrogenic, depending on where you are and the dose.  They are not one or the other. 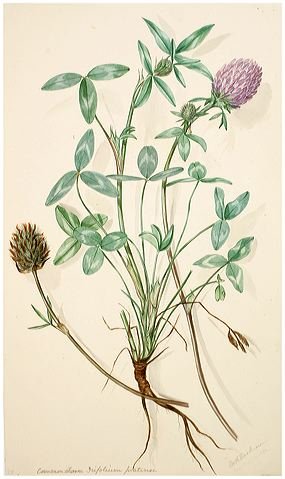 In other words the plant has a set number of phytoestrogens, its chemical composition is actually always the same, but it exerts its activity estrogenic or anti-estrogenic via adjustment of the quantity of the chemicals.

Looking at the chemical composition of the plant only tells you which chemicals it is working with, but not what what its effects might be.  Only by looking at the proportions in the plant would you know, one way or the other.

So Red clover is definitely an overall phytoestrogenic plant, but its effects will vary, as explained bove.

In terms of mineral and vitamin content, this too may depend a little on where it was grown.  One analysis shows that it is capable of providing:

which in the right quantities is good for us and good for livestock. 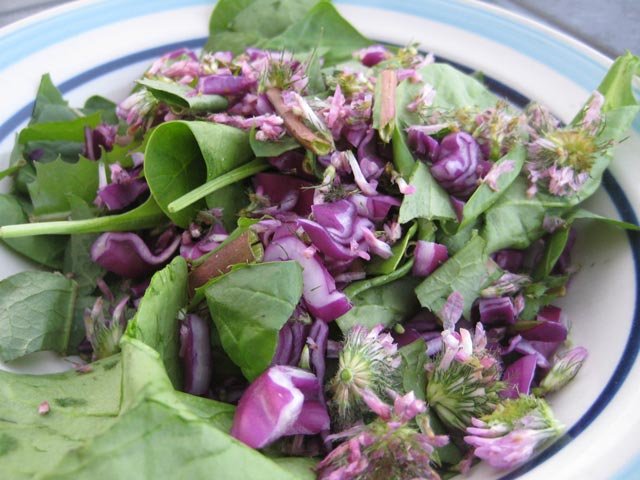 Whilst the flowers are used medicinally, the leaves can be used as a vegetable or in salads.

The leaves can be eaten raw or cooked.  The young leaves must be harvested before the plant comes into flower, and can be used in salads, soups etc. On their own they can be used as a vegetable, cooked like spinach.  'The leaves are best cooked'.

In some countries the leaves are dried, powdered and sprinkled on foods such as boiled rice. The dried leaves are said to “impart a vanilla flavour”. 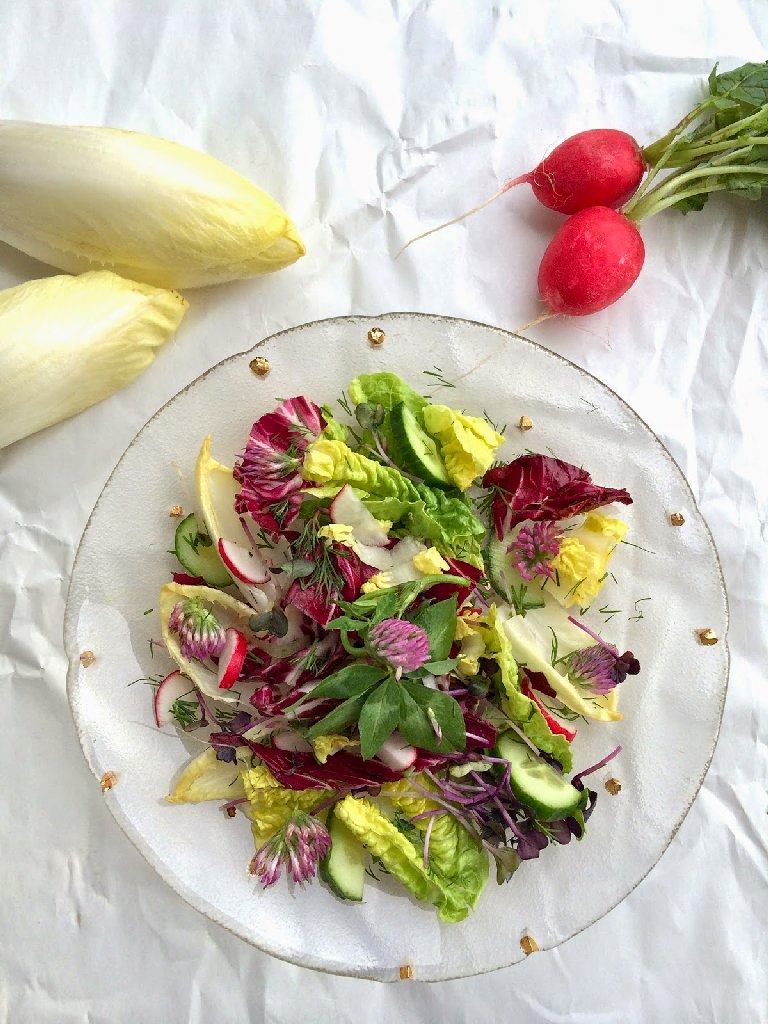 The flowers do not have a lot of flavour and given their medicinal effects need to be used sparingly in general cooking.  Scattering them around salads served at a dinner party could have all sorts of unfortuante effects on the men there or even the women!

The seed can be sprouted and used in salads. In fact, according to the references, the seedshould ONLY be eaten if they have been sprouted.  “The seeds are reported as containing trypsin inhibitors, which can interfere with certain enzymes that help in the digestion of proteins, these are normally destroyed if the seed is sprouted first”

“A delicate sweet herb tea is made from the fresh or dried flowers”.  It is also possible to make other sorts of concoctions from the flowers.  The picture shows a lemonade made from the flowers and fresh lemons.  This combination is a really fascinating one as it could deliver a very big punch of estrogenic activity in the right circumstances.  Lemons too have phytoestrogenic activity, quite marked activity. 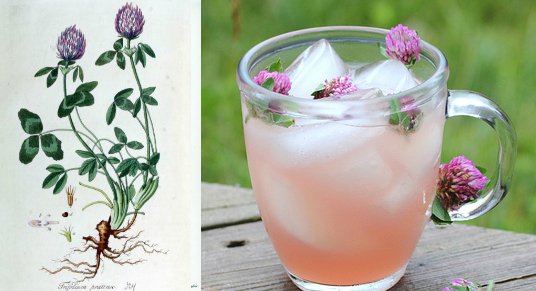 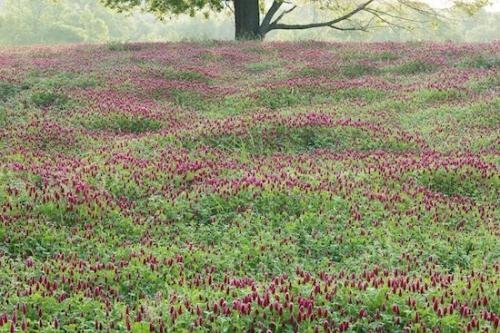