Potatoes originate from South America, genetic testing of the wide variety of cultivars and wild species proved a single origin for potatoes in the area of present-day southern Peru and extreme northwestern Bolivia, where they were domesticated 7,000–10,000 years ago. They were introduced outside the Andes region four centuries ago. 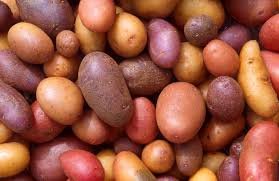 Following centuries of selective breeding, there are now over a thousand different types of potatoes and they have become an integral part of much of the world's food supply. It remains an essential crop in Europe, where per capita production is still the highest in the world, but the most rapid expansion over the past few decades has occurred in southern and eastern Asia. China is now the world's largest potato-producing country, and nearly a third of the world's potatoes are harvested in China and India. It is the world's fourth-largest food crop, following rice, wheat and maize. 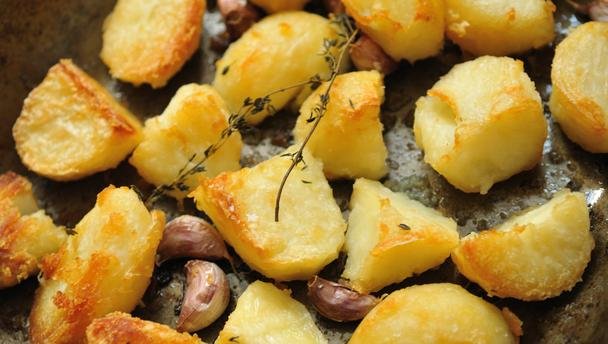 with garlic, thyme and olive oil

I have provided an observation from the Dr Duke Plant database that shows the complete chemical contents of the potato.

The potato contains vitamins and minerals, as well as an assortment of phytochemicals, such as carotenoids and natural phenols. The cooking method used can significantly affect the nutrient availability of the potato. 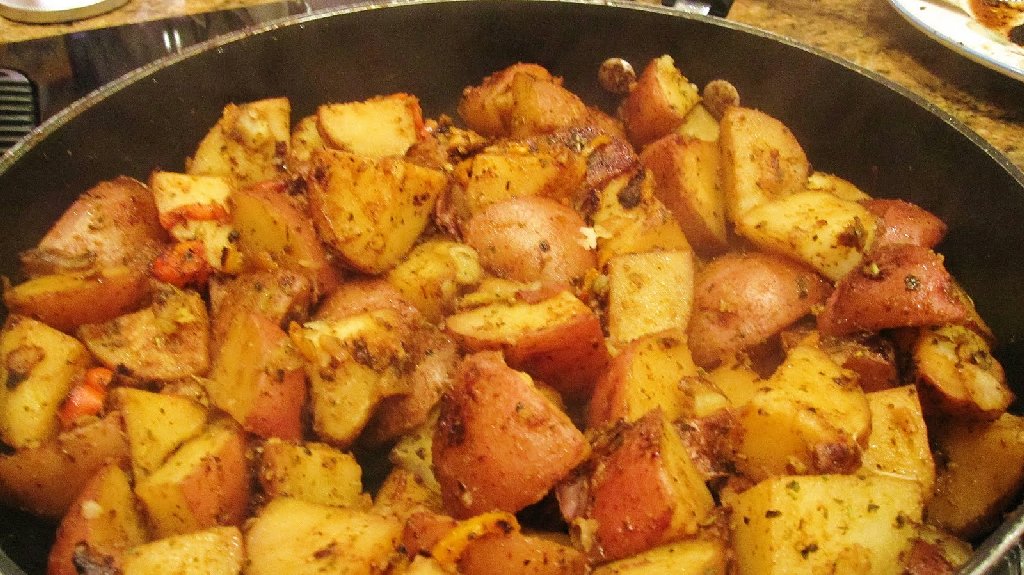 in their skins, roasted in oil and spices

Fibre - The fiber content of a potato with skin (2 g) is equivalent to that of many whole grain breads, pastas, and cereals. 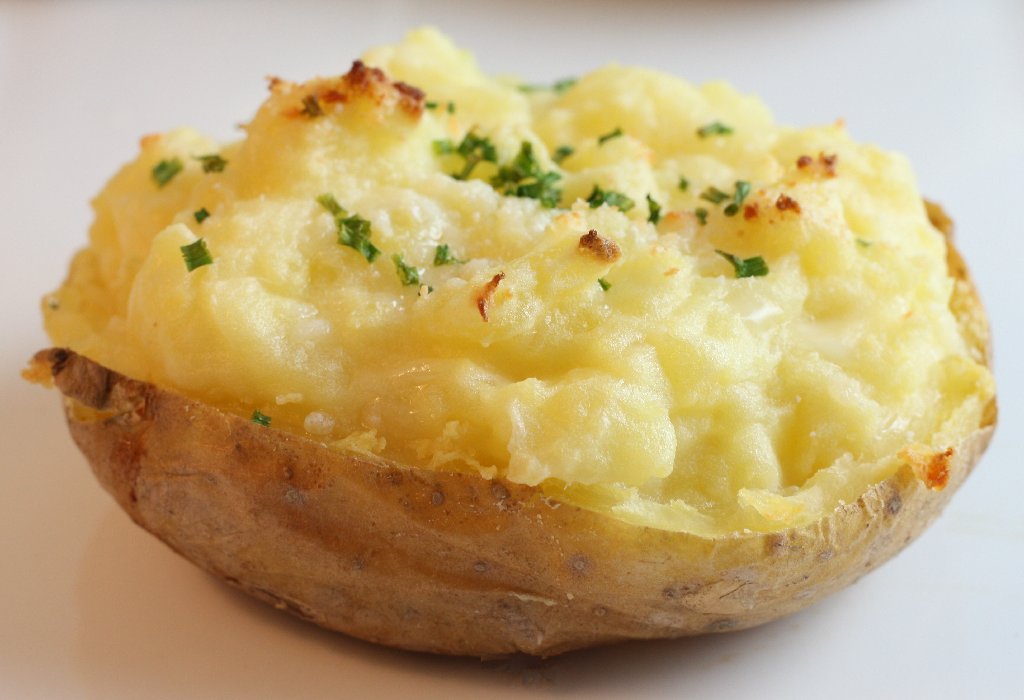 The potato is best known for its carbohydrate content but the predominant form of this carbohydrate is starch and a small but significant portion of this starch is resistant to digestion by enzymes in the stomach and small intestine, and so reaches the large intestine essentially intact. This resistant starch is considered to have similar physiological effects and health benefits as fiber: It provides bulk, and “offers protection against colon cancer, improves glucose tolerance and insulin sensitivity, lowers plasma cholesterol and triglyceride concentrations, increases satiety, and possibly even reduces fat storage” or so the scientists say.

There are three main aspects of the potato that can cause problems:

Storage – one problem is related to storage and is described in the overload section under the heading of Green potatoes.

Pesticides and fungicides - The next aspect is the problems farmers have with diseases and pests. Potatoes suffer badly from diseases such as blight, scab, and powdery mildew – some are fungal, some bacterial and some are viral. They are also attacked by a whole host of pests - slugs, wireworms, Colorado potato beetle, various moths, aphids, thrips and mites.

And farmers use a whole host of pesticides and sprays in a bid to protect their crop. According to an Environmental Working Group analysis of USDA and FDA pesticide residue tests performed from 2000 through 2008, 84% of the 2,216 tested potato samples contained detectable traces of at least one pesticide. A total of 36 unique pesticides were detected on potatoes over the 2,216 samples. Going organic does not always help. During the crop year 2008, many of the certified organic potatoes produced in the United Kingdom and certified by the Soil Association as organic were sprayed with a copper pesticide to control potato blight.

Although commercially grown vegetables in general may contain pesticide residue, potatoes often have the highest.

And toxins can produce some rather negative spiritual experiences not to mention a whole host of illnesses and diseases.

Harvesting – We may believe that farmers dig up their potatoes, perhaps using a scoop, leaves and all but not anymore. Although this paper is from Belgium this is a worldwide approach to commercial potato harvest. My Dad used a fork...........

“Without foliage destruction an efficient harvest is impossible. Potatoes for the fresh market are often harvested when the foliage is still heavy green due to tuber size and starch content that must be limited. Tubers from immature vines are typically very susceptible to skinning and mechanical injury during harvest. Young tubers from immature vines need more time after foliage destruction to set periderm than tubers from senescent vines where the formation of periderm is already started. Spray schemes based on metoxuron, carfentrazone-ethyl and diquat at a dose of 300 g/ha caused slower leaf and stem desiccation. ….. Rhizoctonia tuber infection increased with a longer field period after treatment. In general the increase was more pronounced for the spray schemes where skin set of the tubers was less fast. [Reference: Effect of different chemical and mechanical defolation methods on the skin quality of potatoes.- Haesaert G, Derycke V, Deroo B, Latré J. Hogeschool Gent, Department of Biotechnology, Landscape Architecture and Agriculture Voskenslaan 270, BE-9000 Gent, Belgium - PMID: 15756866].

Rhizoctonia is a fungal infection.

Diquat is an herbicide, so is carfentrazone-ethyl. Metoxuron is a defoliant. 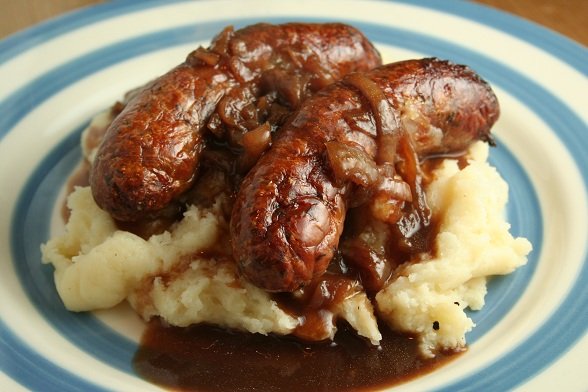 sausages and mash with onion gavy

Mashed, boiled, in stews, roasted, fried, as chips - the potato is a very versatile vegetable and delicious.

Go organic, make sure that when they say organic they mean organic.

It may heal, it may produce hallucinations from the toxins - see the observations. 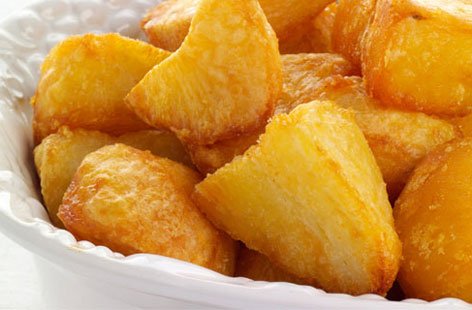 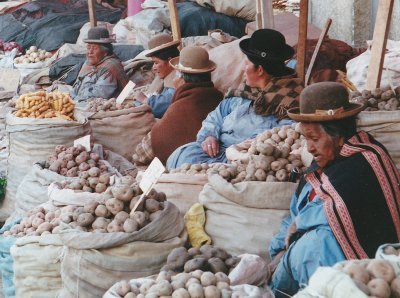