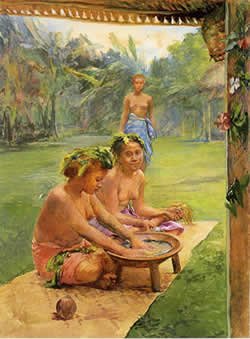 Kava or kava-kava (Piper methysticum) (Piper: Latin for "pepper", methysticum: (Latinized) Greek for "intoxicating") is a crop of the western Pacific.  The name kava(-kava) is from Tongan and Marquesan; other names for kava include ʻawa (Hawaiʻi), ava (Samoa), yaqona (Fiji), and sakau (Pohnpei).  It is consumed throughout the Pacific Ocean cultures of Polynesia, including Hawaii, Vanuatu, Melanesia and some parts of Micronesia.

Kava roots are used for medicinal, spiritual, cultural and social purposes throughout the Pacific. These cultures have a great respect for the plant and place a high importance on it. In Fiji, for example, a formal yaqona (kava) ceremony will often accompany important functions, usually involving a ritual presentation of the bundled roots as a sevusevu (gift), and drinking of the yaqona itself.

One of its main benefits to health is that it appears to help with anxiety - it is a relaxant and is slightly sedative in effect without making you fuzzy headed, calming without being a befuddler.  Medical literature sometimes claims kava has a "potential for addiction" because "it produces mild euphoria and relaxation".  So does yoga, so presumably yoga is addictive too.

Pharmaceutical companies and sadly some of the islanders have tried to cash in on this plant and produce pills and dried roots for sale to those of us in the rest of the world that cannot grow it, but the pills are often equivalent to an overdose, lack all the minerals and worse.  In 2002 the EU imposed a ban on imports of kava-based pharmaceutical products.  In the United Kingdom, for example, it is a criminal offence to sell, supply or import any medicinal product containing kava.

The ban is partly based on safety concerns over liver toxicity.  Once this problem was investigated it was found that the stems and leaves were being used by supplement makers, as opposed to solely the root of the plant.  In effect you have overdose of the drugs in the plant coupled with chemicals from parts of the plant that should never have been used.

Citation:   DChild. "Pills Not Like Tea: An Experience with Kava (ID 65934)". Erowid.org. Sep 14, 2009. erowid.org/exp/65934
My girlfriend and I recently tried Kava extract in tablet form, and having already experienced the traditional 'tea' method from the ground root, we both agreed that this might be a more pleasant alternative. We were wrong. ..... Initially there were no real effects as opposed to the normal timeline of kava tea (except minor stomach discomfort). About 2 hours later, we both felt quite tired and sick, … About 3 hours had passed, we both felt very tired and decided to go to bed. We both woke up at different stages during our sleep …with quite distressing stomach discomfort and nausea, complete with the inability to go back to sleep for a number of hours. Our experience was horrible and we will be sticking to the mud flavored drink!   *Tablets came in a container of 60 tablets, brought from a health food shop, Medi-Herb brand

It is also possible to get dried kava root.  But again dried kava root has its own problems and the main one is the difficulty of storage.  It would appear that dried or not, the roots can go mouldy relatively quickly  “dried kava root hepatotoxicity may be due to contamination with aflatoxins or other mould hepatotoxins”.  A 2012 analysis of cases worldwide proposed that mould was the primary cause of hepatotoxicity in kava products.

As such the overall recommendation is that kava must be consumed fresh and prepared from fresh plants, which means that its properties are thus denied to anyone unable to grow it, but then that’s life. 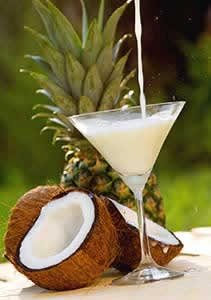 There is an interesting split in the growing and cultivation of kava strains.  You have the overdosers, always looking for stronger varieties always on the lookut for something more potent.  From them you get potent strains like "Isa" in Papua New Guinea, also called "Tuday" and pronounced as "two-day" because it is said to have effects lasting two days.  The plant itself is a strong, very hardy, fast-growing variety with multiple light to dark green stems covered with raised dark spots.

And then you have the people who recognise the value of more gentle effects.

In Vanuatu, exportation of kava is strictly regulated. Only strains they deem as "noble" varieties that are not too weak or too potent are allowed to be exported. Only the most desirable strains for everyday drinking are selected to be noble varieties to maintain quality control. In addition, their laws mandate that exported kava must be at least five years old and farmed organically. Their most popular noble strains are "Boroguu" or "Boronggoru" from Pentecost Island, "Melomelo" from Ambae island (called sese in North Pentecost), and "Palarasul" kava from Espiritu Santo Island. 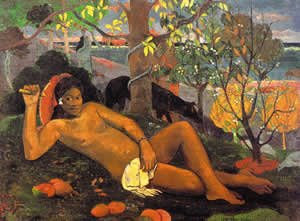 By promoting relaxation but ensuring the mind was not knocked out as it can be with alcohol, kava was used traditionally to obtain the more positive forms of spiritual experience – inspiration and wisdom.

The Ali'i (kings) of old Hawaii, for example, coveted the special kava they called "Mo'i". This sacred variety was so important to them that no one but royalty was allowed to use it.  In order that the wisdom so acquired stayed with the king and no one else, all sorts of rumours were started about it – for example no one else should use it "lest they suffer an untimely death". The reverence for Hiwa in old Hawai‘i is evident in this portion of a chant recorded by N.B. Emerson. "This refers to the cup of sacramental‘awa brewed from the strong, black ‘awa root (‘awa hiwa) which was drunk sacramentally by the kumu hula":

The day of revealing shall see what it sees:
A seeing of facts, a sifting of rumors,
An insight won by the black sacred ‘awa,
A vision like that of a sacred god!

One hula prayer for inspiration contains the line, He ‘ike pū ‘awa hiwa translated as "a wisdom from kava offerings".

Traditionally, kava is prepared by either chewing, grinding or pounding the roots of the kava plant. Grinding is done by hand against a cone-shaped block of dead coral; the hand forms a mortar and the coral a pestle. The ground root/bark is combined with only a little water, as the fresh root releases moisture during grinding. Pounding is done in a large stone with a small log. The product is then added to cold water and consumed as quickly as possible. 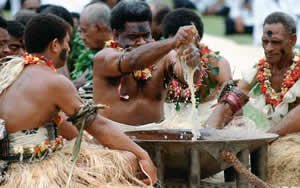 The extract is an emulsion of kavalactone droplets in starch. The taste is slightly pungent, while the distinctive aroma depends on whether it was prepared from dry or fresh plant, and on the variety. The colour is grey to tan to opaque greenish.

In Vanuatu, a strong kava drink is normally followed by a hot meal or tea. The meal traditionally follows some time after the drink so the chemicals are absorbed into the bloodstream quicker. Traditionally, no flavoring is added.

I don't know and it worries me.

The problem with plants that have this sort of healing effect on people, that have so many good reports, is often that there are things you need to take heed of, but the reports cannot be ignored and the effects are real and positive.

The only negative reports I found were from people whose stupidity defies belief - people who smoked the health food store pills for example and were not at all well.

Those people who used the root fresh, or if dried freshly supplied by mail order from source, seem to have been universally happy with the effect and it has helped a lot of very unhappy ill people.