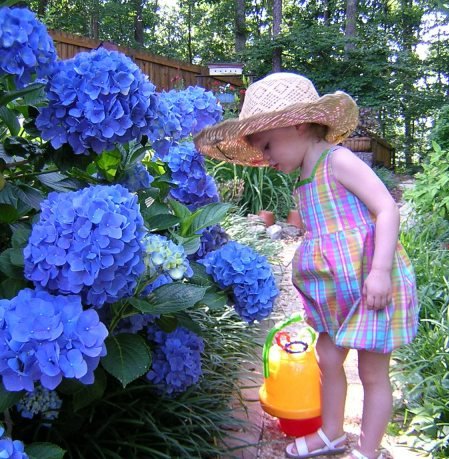 Hydrangea, common names hydrangea or Hortensia, is a genus of 70–75 species of flowering plants native to southern and eastern Asia (China, Japan, Korea, the Himalayas, and Indonesia) and the Americas.

By far the greatest species diversity is in eastern Asia, notably China, Japan, and Korea.

Most are shrubs 1 to 3 meters tall, but some are small trees, and others lianas reaching up to 30 m (98 ft) by climbing up trees. They can be either deciduous or evergreen, though the widely cultivated temperate species are all deciduous.

So why is it in the medicine section?

It is a very effective chelator of aluminium – not in us, but in the soil.  Thus if your soil is or has become toxic through aluminium, hydrangeas are bioremedial plants.  They have the potential, in other words, to make the land safer for us to grow food, but also safer in general. 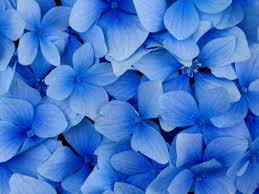 Hydrangeas are popular ornamental plants, grown for their large flowerheads, with Hydrangea macrophylla being by far the most widely grown with over 600 named cultivars.

There are two flower arrangements in hydrangeas. Mophead flowers are large round flowerheads resembling pom-poms or, as the name implies, the head of a mop. In contrast, lacecap flowers bear round, flat flowerheads with a center core of subdued, fertile flowers surrounded by outer rings of showy, sterile flowers. 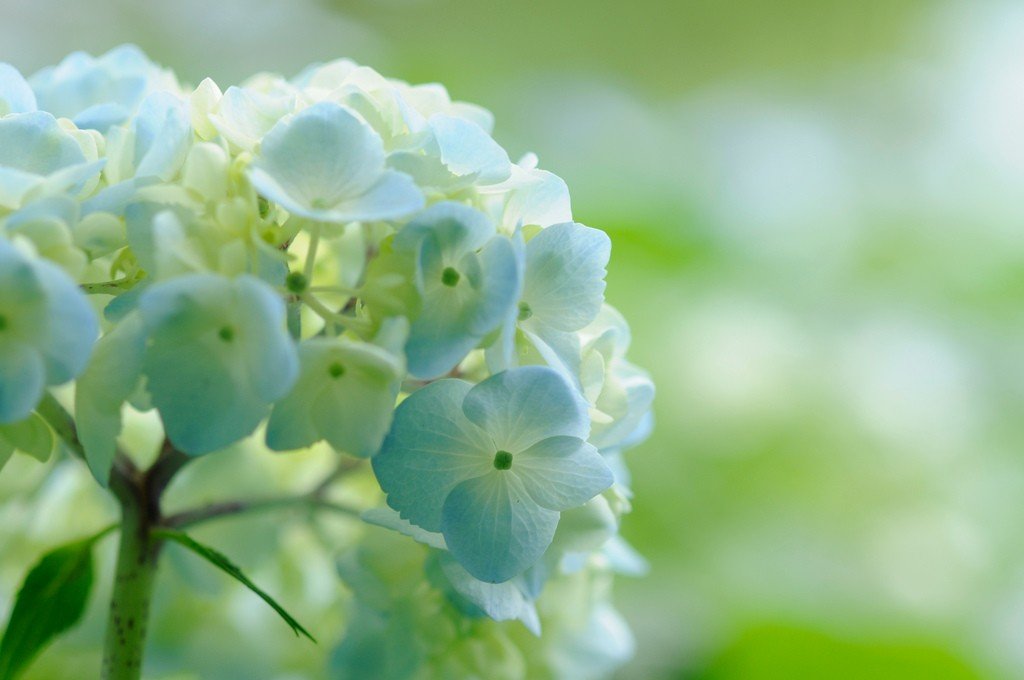 Hydrangea flowers are produced from early spring to late autumn; they grow in flowerheads (corymbs or panicles) at the ends of the stems.

If we now take one popular example, Hydrangea macrophylla, it is a deciduous Shrub that can grow to 3 m (9ft) by 3 m (9ft) at a medium rate. It is hardy to zone (UK) 5 and is not frost tender. It is in flower from July to September. The flowers are hermaphrodite (have both male and female organs) and are pollinated by Bees. 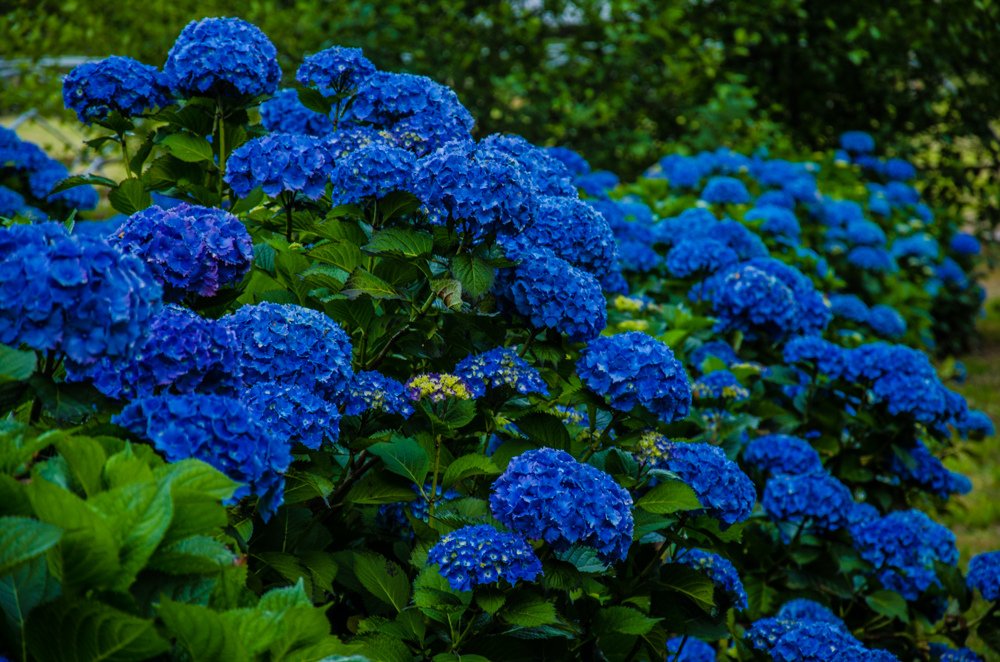 In some species the flowers are white, but in yet other species (notably H. macrophylla),they can be blue, red, pink, light purple, or dark purple. In these species the colour is affected by soil pH.

For H. macrophylla and H. serrata cultivars, the flower colour is determined by the relative acidity of the soil and by the metals in the soil.  An acidic soil (pH below 7) and the presence of aluminium produces flower colours of a deep blue.  If the soil is alkaline soil (pH above 7) it will produce pinker flowers. 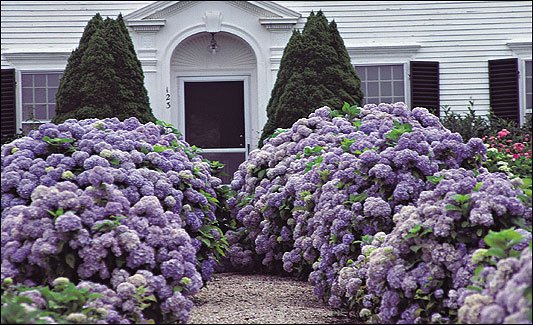 Using the example of Hydrangea macrophylla, it will grow in  light (sandy), medium (loamy) and heavy (clay) soils.  It prefers the soil to be well-drained, but moist.  It can grow in semi-shade (light woodland) or no shade. The plant can also tolerate maritime exposure. Hydrangeas will grow in soil of any acidity, but their chelating ability, as we saw, is pH dependent.  It is also a very wind resistant plant when grown in mild areas, but not in colder areas.

A sudden unexpected frost whilst the plant is still in leaf in autumn can affect it badly, the leaves go black, although the plant does bounce back again in spring, as long as it is given some nutrients to help it. 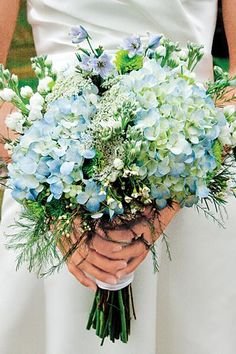 It is noticeable that if not pruned regularly, the bushes become very 'leggy', on the other hand too brutal a pruning does weaken the plant.

One thing that tends to resolve such arguments is that most garden varieties only flower on 'old wood'. Thus new wood produced after pruning will not produce flowers until the following season.

As the flowerheads when dry are ornamental in their own right, you can leave pruning until early spring, unless of course you want to use the dried flowers in a flower arrangement in the home.

But, if the objective is chelation, however, one needs to remember that flowers and root contain aluminium, so it would then be prudent to dig up the bush whilst it is in full flower and bury it in a deep pit, replacing it with new cuttings.

Hydrangeas can be grown from seed, but one other way is from cuttings of half-ripe wood, taken in around  July/August.  They need to be kept in a cold frame and over wintered in a greenhouse.  They can then be planted out in spring.  It is also possible, however, to use the left-overs from pruning.  At least it has worked OK for us. 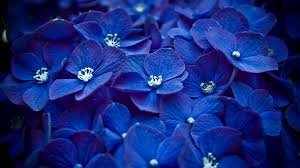 Hydrangeas are grown all over the world as an introduced species.  It might be easier to list those countries where they are not grown than those that are, because they are beautiful plants.

After having been introduced to the Azores, for example, H. macrophylla became widely grown, and Faial is now known as the "blue island" due to the vast number of hydrangeas present on the island. 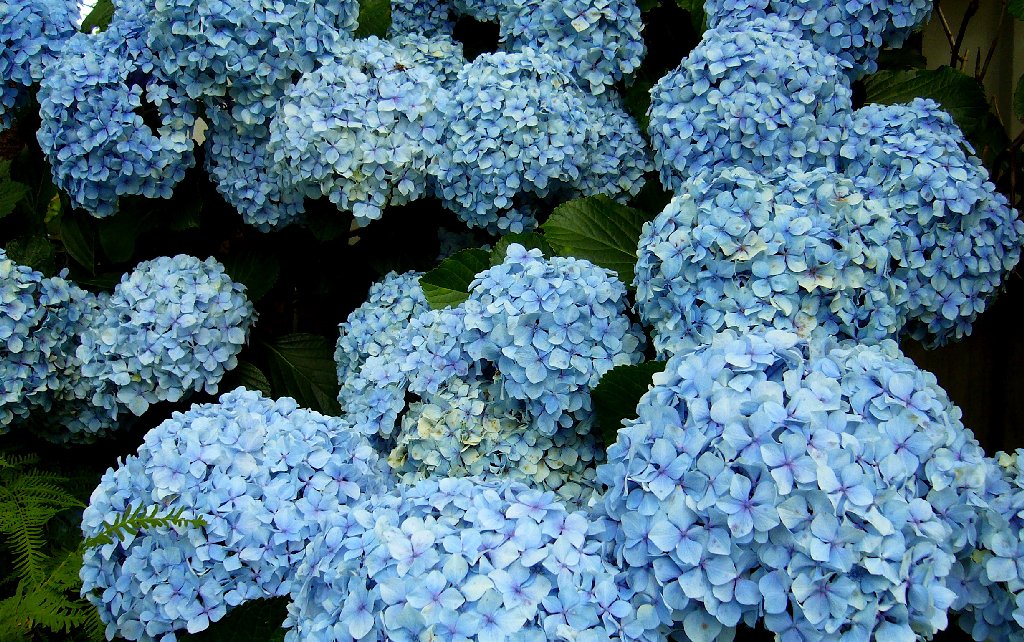 Although these seems to be evidence that a number of true hydrangeas will chelate aluminium from soils, it may be more helpful to look at the evidence of just one variety.

Hydrangea macrophylla is tolerant of acidic soils in which toxicity generally arises from the presence of the soluble aluminum (Al) ion. When hydrangea is cultivated in acidic soil, its resulting blue sepal color is caused by the Al complex formation of anthocyanin.
The concentration of vacuolar Al in blue sepal cells can reach levels in excess of approximately 15 mM, suggesting the existence of an Al-transport and/or storage system. However, until now, no Al transporter has been identified in Al hyperaccumulating plants, animals or microorganisms.
To identify the transporter being responsible for Al hyperaccumulation, we prepared a cDNA library from blue sepals according to the sepal maturation stage, and then selected candidate genes using a microarray analysis and an in silico study. Here, we identified the vacuolar and plasma membrane-localized Al transporters genes vacuolar Al transporter (VALT) and plasma membrane Al transporter 1 (PALT1), respectively, which are both members of the aquaporin family.
The localization of each protein was confirmed by the transient co-expression of the genes. Reverse transcription-PCR and immunoblotting results indicated that VALT and PALT1 are highly expressed in sepal tissue.
The overexpression of VALT and PALT1 in Arabidopsis thaliana conferred Al-tolerance and Al-sensitivity, respectively.  PMID:  22952644 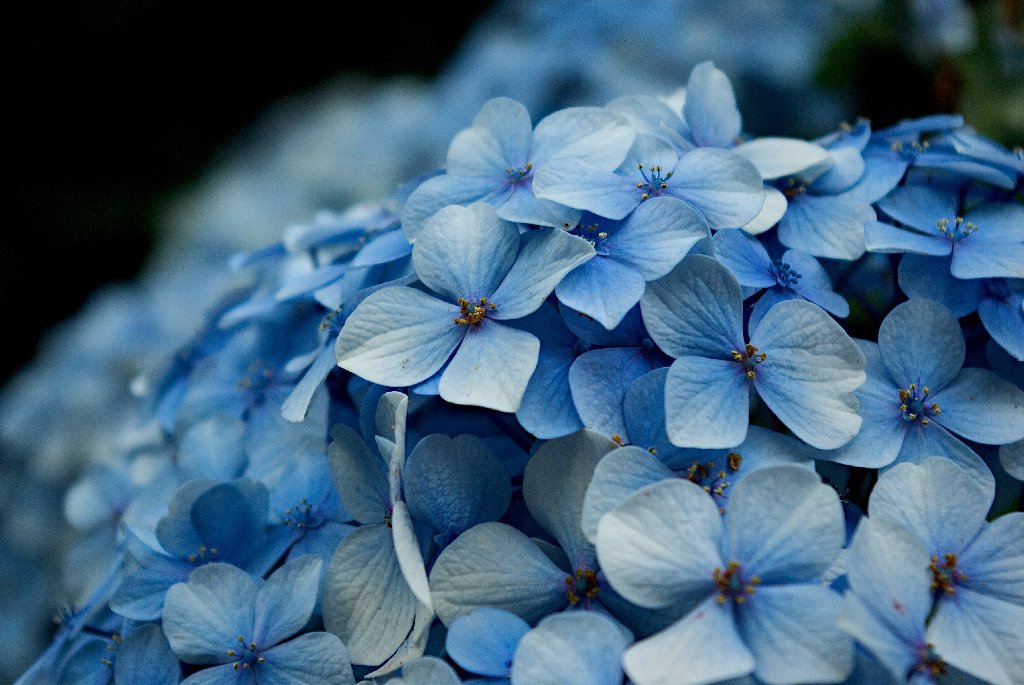 The importance of plants as an aid to chelating soil is best first described by this paper on the problem of heavy metals in general.

Heavy metal toxicity has proven to be a major threat and there are several health risks associated with it.
The toxic effects of these metals, even though they do not have any biological role, remain present in some or the other form harmful for the human body and its proper functioning.
They sometimes act as a pseudo element of the body while at certain times they may even interfere with metabolic processes.
Few metals, such as aluminium, can be removed through elimination activities, while some metals get accumulated in the body and food chain, exhibiting a chronic nature.
Various public health measures have been undertaken to control, prevent and treat metal toxicity occurring at various levels, such as occupational exposure, accidents and environmental factors. Metal toxicity depends upon the absorbed dose, the route of exposure and duration of exposure, i.e. acute or chronic. This can lead to various disorders and can also result in excessive damage due to oxidative stress induced by free radical formation. PMID:  26109881

Now if we look at the damage done in more detail……………… 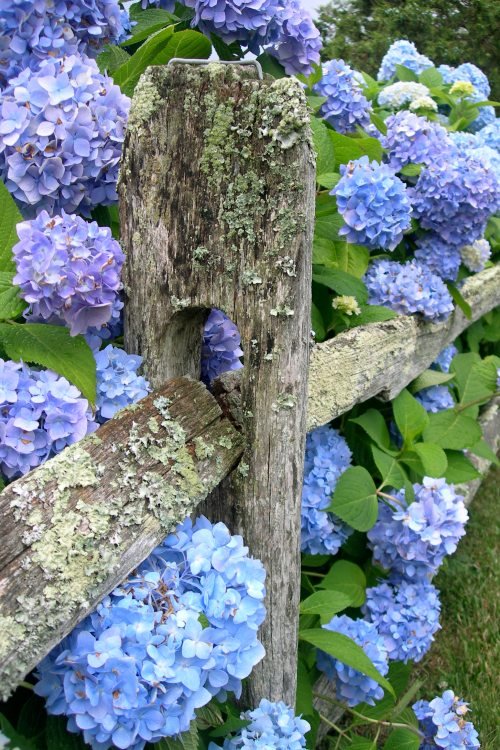 Toxic and harmful factors co-exist in the environment; these factors often interact to induce combined toxicity, which is the main focus of toxicological research. .....
a large number of studies have shown that aluminum (Al) and benzo[a]pyrene (BaP) are neurotoxic and target the central nervous system to cause neuronal apoptosis.
Because we are exposed to both Al and BaP in the air, water, food, and even medicine, the combined effects of these agents in humans must be examined.
The present study examines the ability of Al and BaP co-exposure to intensify neuronal apoptosis. PMID:  25971159

In essence, aluminium has the potential to cause brain damage and may be one of the causative agents behind a host of brain related problems such as Parkinson’s disease or Alzheimers.  All these diseases can have more than one cause, but the aim must be to try to gradually eliminate or minimise these causes from our environment.

And hydrangeas have the ability to help. 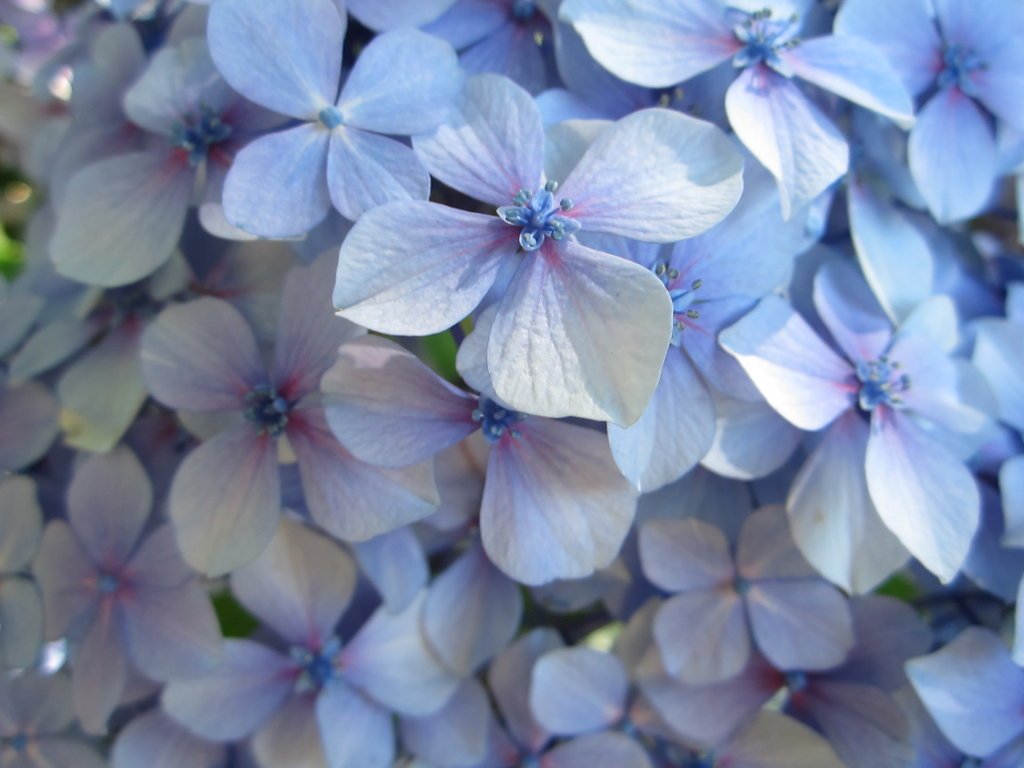