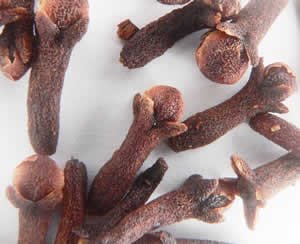 Cloves are the aromatic dried flower buds of a tree in the family Myrtaceae, Syzygium aromaticum. They are native to the Maluku islands in Indonesia and used as a spice in cuisines all over the world. Cloves are harvested primarily in Indonesia, India, Madagascar, Zanzibar, Pakistan, and Sri Lanka.

The clove tree is an evergreen that grows to a height ranging from 8–12 m, having large leaves and sanguine flowers in numerous groups of terminal clusters. The flower buds are at first of a pale colour and gradually become green, after which they develop into a bright red, when they are ready for collecting. Cloves are harvested when 1.5–2 cm long, and consist of a long calyx, terminating in four spreading sepals, and four unopened petals which form a small ball in the center

And cloves have healing properties.

"Cloves are used in Indian Ayurvedic medicine, Chinese medicine, and western herbalism and dentistry where the essential oil is used as an anodyne (painkiller) for dental emergencies. Cloves are used as a carminative, to increase hydrochloric acid in the stomach and to improve peristalsis. Cloves are also said to be a natural anthelmintic. ..... Clove oil, applied to a cavity in a decayed tooth, also relieves toothache.

In Chinese medicine cloves or ding xiang are considered acrid, warm and aromatic, entering the kidney, spleen and stomach meridians, and are notable in their ability to warm the middle, direct stomach qi downward, to treat hiccough and to fortify the kidney yang.

Because the herb is so warming it is contraindicated in any persons with fire symptoms and according to classical sources should not be used for anything except cold from yang deficiency. As such it is used in formulas for impotence or clear vaginal discharge from yang deficiency, for morning sickness together with ginseng and patchouli, or for vomiting and diarrhea due to spleen and stomach coldness.

Cloves may be used internally as a tea and topically as an oil for hypotonic muscles, including for multiple sclerosis. This is also found in Tibetan medicine. Some recommend avoiding more than occasional use of cloves internally in the presence of pitta inflammation such as is found in acute flares of autoimmune diseases "

The table below shows some of the mineral and vitamin content of cloves.  Like most spices it is a good source of potassium.
Source: US National Nutrient Database for Standard Reference
Release 26   Software v.1.3.1 Nutrient values and weights are for edible portion

Use sparingly in curries, apple dishes and stews.  It is delicious studded into gammon joints covered in brown sugar and mustard and roasted in the oven.