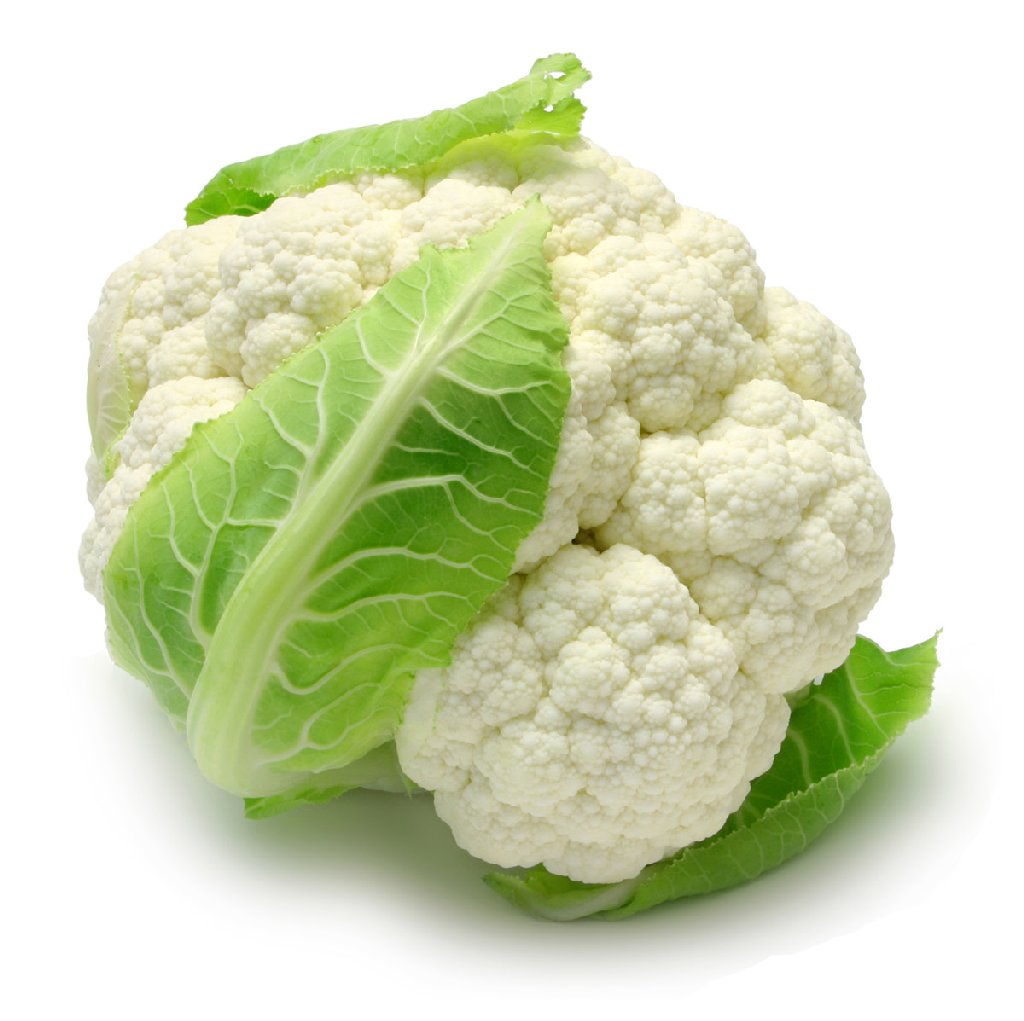 Cauliflower is one of several vegetables in the species Brassica oleracea, in the family Brassicaceae.

Cauliflower is now cultivated all over the world, its origins are unknown.  It is believed to have been cultivated as long ago as the 6th century BC and was possibly mentioned by Pliny in the 1st century AD, when he included a description of what he called cyma in his Natural History.  In the 12th century, three varieties were described in Spain as introductions from Syria, where “it had doubtless been grown for more than a thousand years”. It is found in the writings of the Arab botanists Ibn al-'Awwam and Ibn al-Baitar, in the 12th and 13th centuries when its origins were said to be Cyprus.

They were introduced to France from Genoa in the 16th century, and are featured in Olivier de Serres' Théâtre de l'agriculture (1600), as cauli-fiori "as the Italians call it, which are still rather rare in France; they hold an honorable place in the garden because of their delicacy".

It was introduced in India in 1822 from England by the British.  These days a large number of the cauliflowers grown in the UK are by allotment holders.  They are also, in the North of England, another vegetable that is the subject of the giant vegetable competitions – for fun and not for food, as they are often a little tough.

These days China and India are the biggest commercial growers, with Spain, Mexico and Italy also producing significant though smaller amounts. 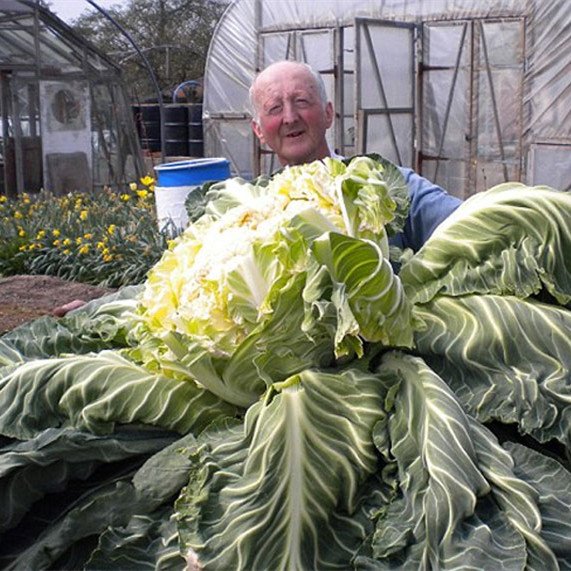 There are hundreds of historic and current commercial varieties used around the world with about 80 in North American alone, but all have the characteristic central ‘curd’ of various colours surrounded by protective leaves, with a short stalk.  The cauliflower head is composed of a white ‘inflorescence meristem’. Cauliflower heads resemble those in broccoli, which differs in having flower buds. There are four major groups of cauliflower. 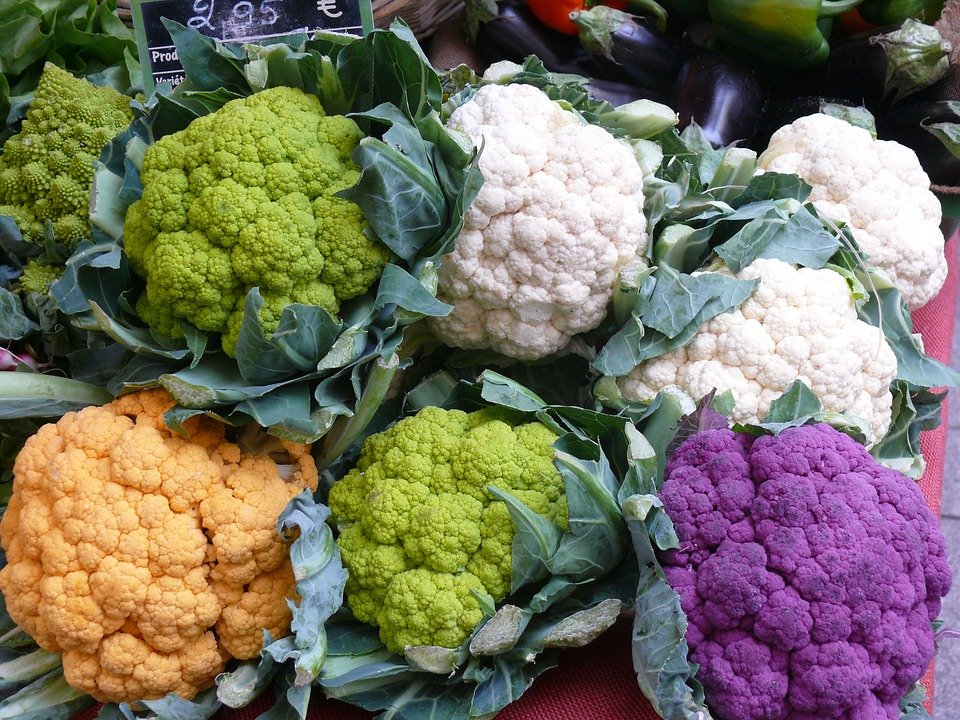 These then come in different colours 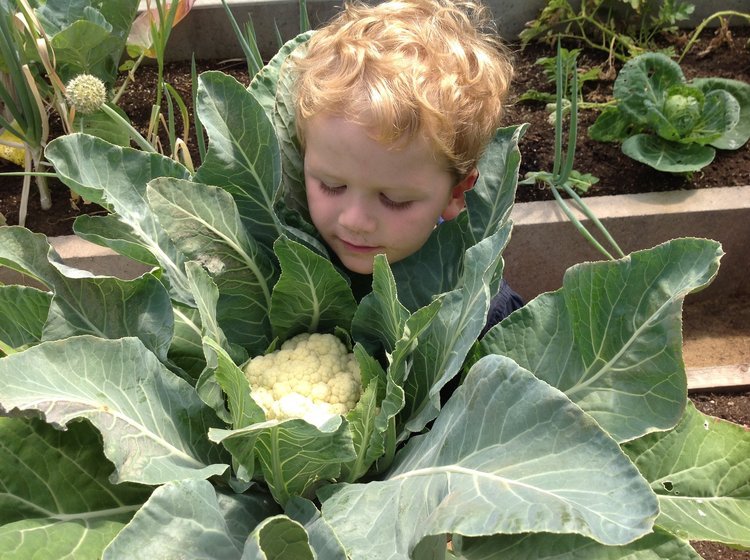 Cauliflowers are pricey to buy so if you can grow your own, it’s really worthwhile. They take up quite a bit of space, need rich, deep soil and need plenty of water, especially in summer, but they can be grown all year round.

Cauliflowers do best in very fertile soil, and digging in a bucketful of well-rotted manure or organic matter before planting, and raking in 150g per sq m of Growmore or other general purpose fertiliser, will help growth. Firm the soil by treading before planting. 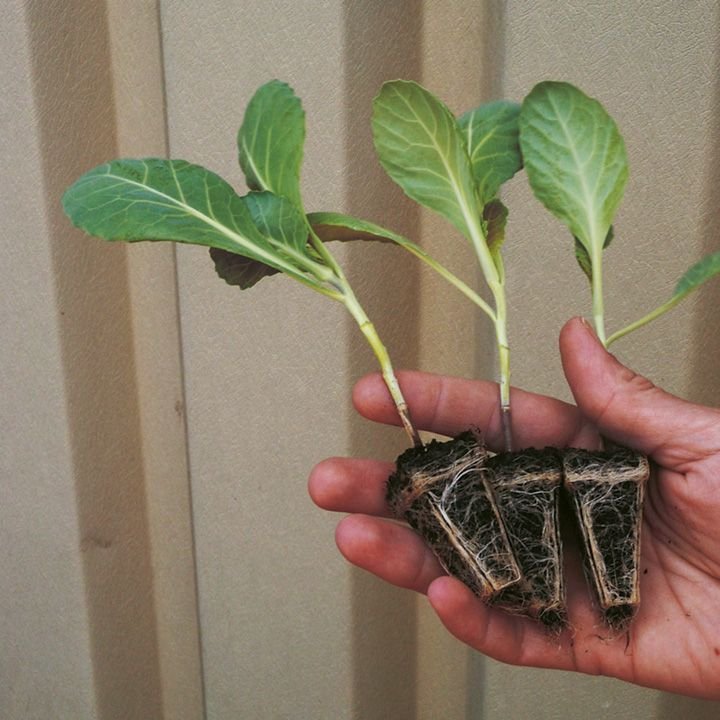 wait until you have strong plants, grown in sterile compost
before you transplant

If growth is checked, at any time during growth, they produce small, deformed heads. To avoid problems, water plants well the day before transplanting and make a hole deep enough to hold the plant with the lowest leaves at ground level. Fill this hole repeatedly with water. This will fill the hole with soil and ensure the plant is sitting in a large area of moist soil. Firm the soil very well against the roots. 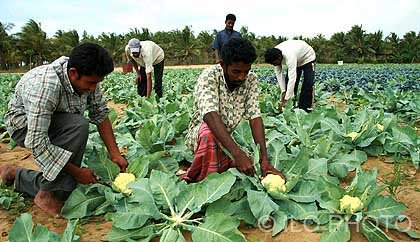 Mildew – Cauliflowers may get various fungal infections and mildews – especially if not exposed to fresh breezes and in depleted soils.  The solution is to enrich the soil and improve ventilation.

Caterpillars - A number of caterpillars will feed on brassicas, but the most common are those of cabbage white butterflies. You will usually see the caterpillars, if not, you will see the holes they make in the leaves. If you have only a few plants, you may be able to pick the caterpillars off, otherwise insect-proof mesh or fine netting (5-7mm mesh) can prevent egg-laying. 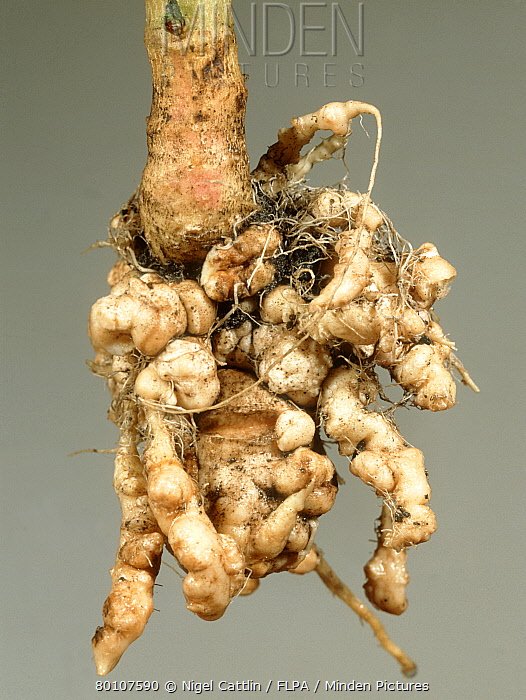 In the presence of susceptible plant roots, these resting spores germinate and infect the root hairs, causing the distortion. The fungus produces more resting spores in the affected tissue, which eventually rots and releases them back to the soil, ready for the cycle to start over again.  Club root can infect whenever the soil is moist and warm, so most new infections occur from mid-summer until late autumn.  You may see the following symptoms: 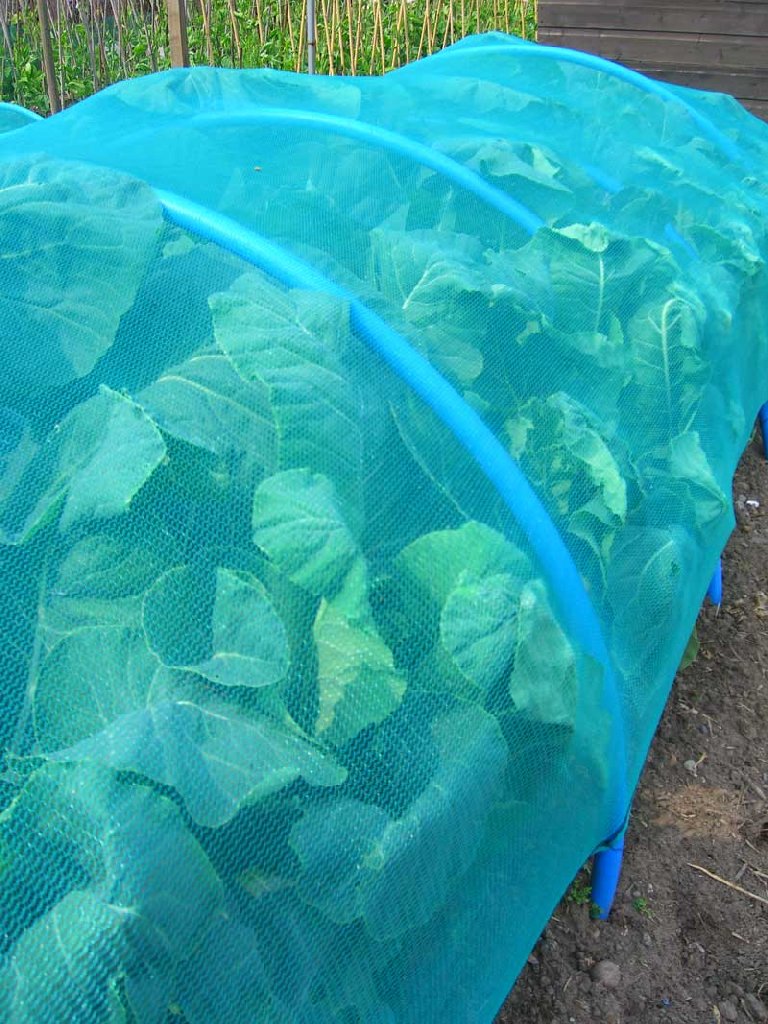 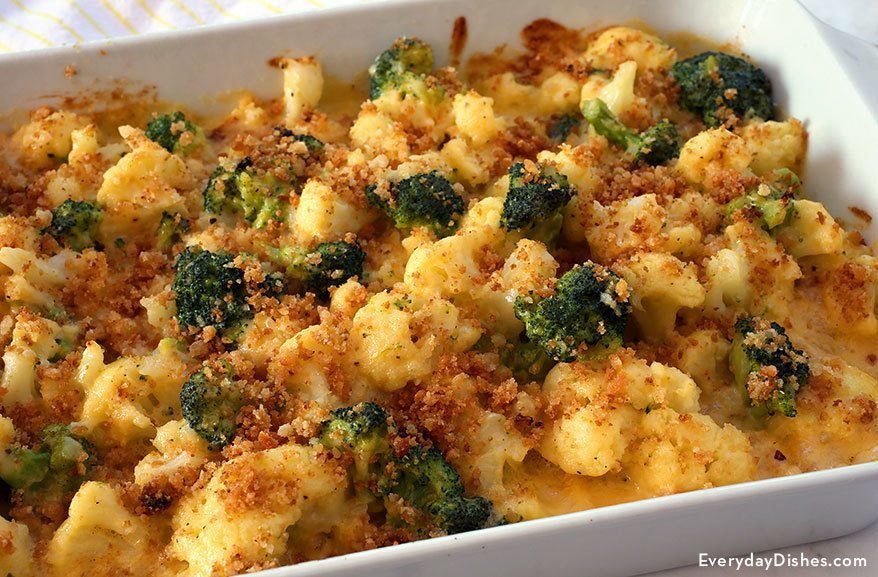 Cauliflower is a sort of super vegetable with benefits too many to list here.  The observations below describe not only all the healing potential, but also - in the Dr Duke full analysis - all the vitamins and minerals. 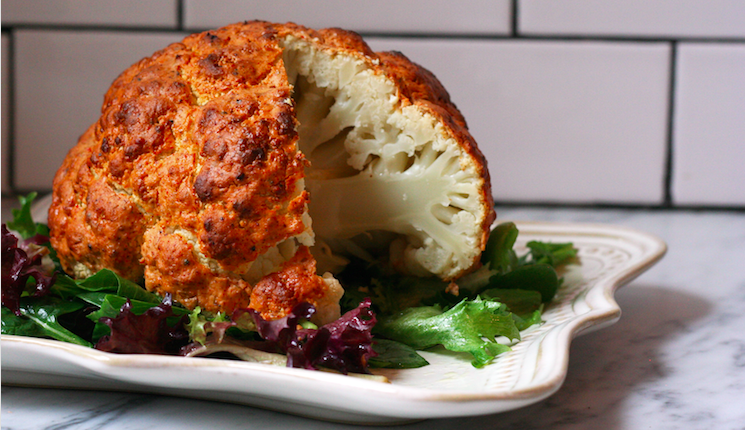 Cauliflower is remarkably versatile as a vegetable.  Both the leaves and the curds can be eaten and as such it is also very economical.  Romanesco cauliflower, described above, is especially delicious and is immensely attractive.  The leaves are edible, and should not be discarded.

It can be boiled or steamed as florets, or roasted whole.  It can also be sliced and roasted or fried.  Cauliflower can be added to a stir fry, or mashed with cheese and an egg, baked and used as a base for toppings – like a sort of vegetable pizza.

In Britain, we often eat cauliflower baked with cheese – cauliflower cheese, but in Italy it is baked as a Parmigiana with cream, cheese and anchovies- and this is very special.

If you have any cauliflower cheese left over, add some stock to it, puree it with a blender and you have a very nice soup.  Swirl some double cream on the top and t is a meal fit for a king. 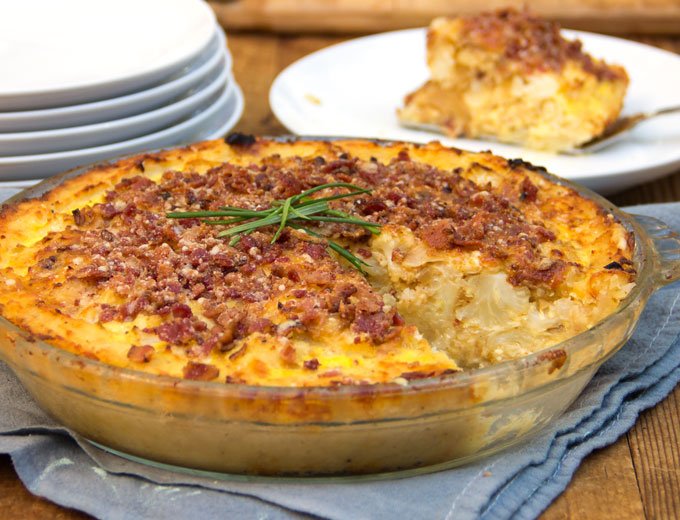 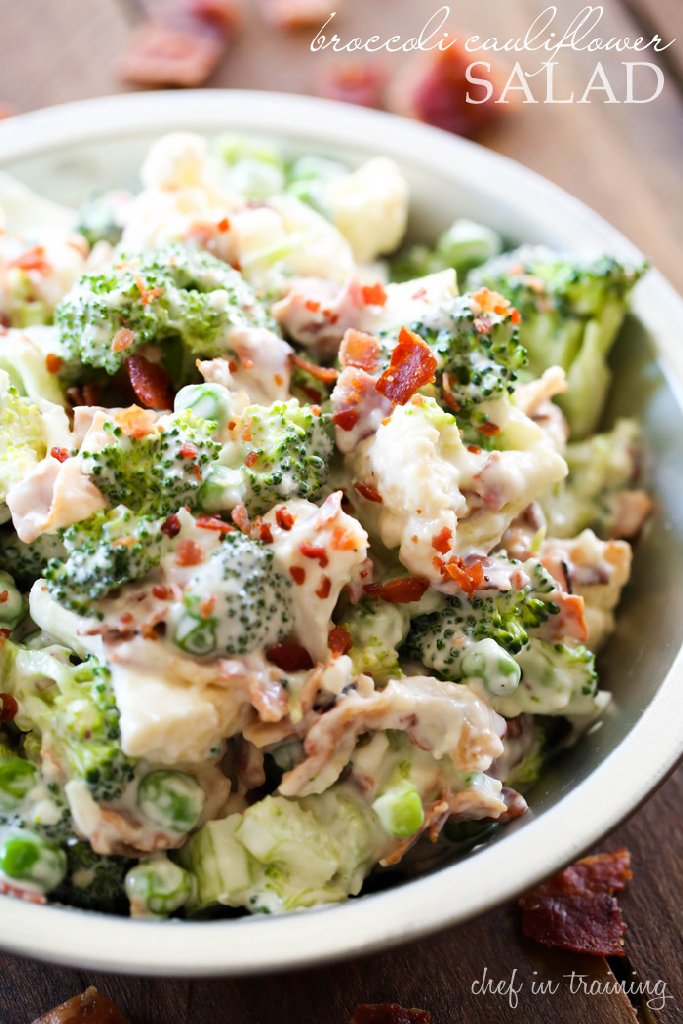 This is a delicious vegetarian savoury dish.  If you are gluten intolerant use gluten free bread for the breadcrumbs.

This recipe can be used with unripe pears in which case the pear slices should be poached in boiling water until just tender. 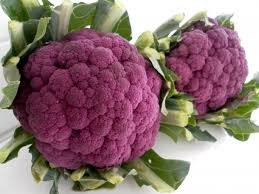 This is a Persian kookoo recipe. The word is usually translated as omelette, but it more closely resembles a savoury vegetable cake, very much like a Spanish tortilla, and can be eaten hot or cold. 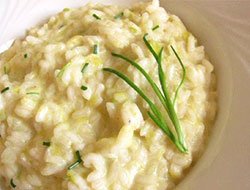 Once the risotto has been left for 2 minutes it should be eaten as soon as possible.  Very crispy chopped bacon sprinkled over the top goes well with this dish, but if you are a vegetarian, you can sprinkle with some anchovy pangrattato, - made by whizzing breadcrumbs with anchovies, oil and a red chilli in a food processor then frying the flavoured breadcrumbs, stirring and tossing constantly until golden brown. 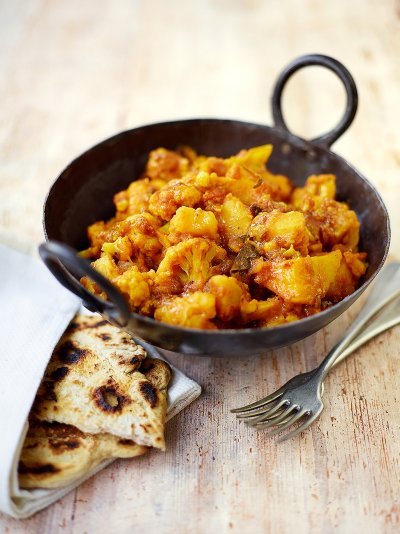 Serve this curry immediately with a bowl of creamy yoghurt on the side and some chutneys. 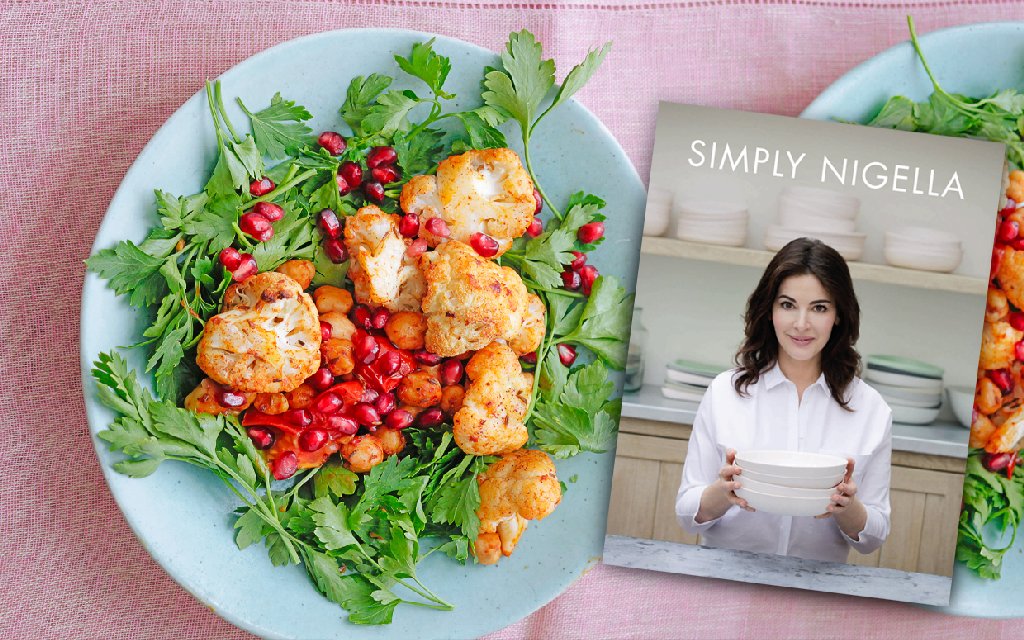 Although this dish, as Nigella describes, it uses pomegranate seeds, it is actually nice without too.  This can be eaten hot or cold.  It goes well with crumbled Lancashire cheese. 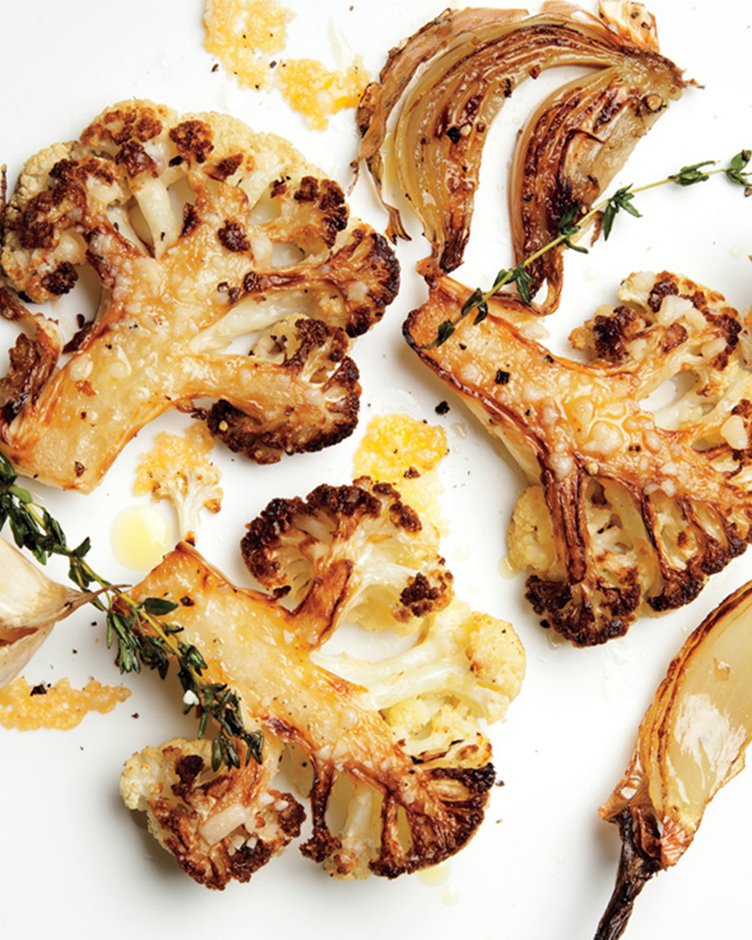 Based on a Jamie Oliver recipe. 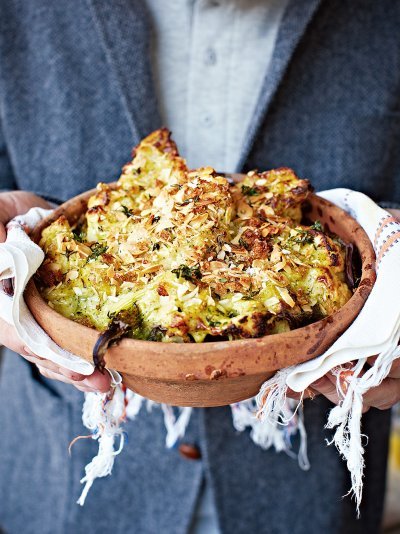 Loosely based on a recipe by Jamie Oliver – as he says “It’s really good fun to play around with different cheeses in this dish and how they taste and melt”. Gorgonzola works especially well as does stilton.

Very strong French cheeses are also good.  Comté for example – better known as Gruyère is a French cheese made from unpasteurized cow's milk in the Franche-Comté region of eastern France.  If you use this a little nutmeg can be added.

More vegetables can be added to this dish – but you always need to cube and boil them– for instance, celeriac, squash, potatoes and leeks “all work a treat”.

Ramsons are wild garlic – it is the leaves that are eaten, which is why they are used in this recipe.  If you cannot find ramsons, or they are not in season, use fresh spinach and add two cloves of crushed garlic. 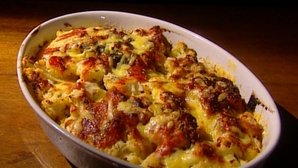