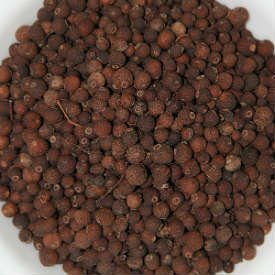 Allspice, also called Jamaica pepper, pepper, myrtle pepper, pimenta, pimento, English pepper or newspice, is the dried unripe fruit ("berries", used as a spice) of Pimenta dioica, a midcanopy tree native to the Greater Antilles, southern Mexico, and Central America, now cultivated in many warm parts of the world. The name 'allspice' was coined as early as 1621 by the English, who thought it combined the flavour of cinnamon, nutmeg, and cloves.

The fruit are picked when green and unripe and are traditionally dried in the sun. When dry, they are brown and resemble large brown peppercorns. The whole fruit have a longer shelf life than the powdered product and produce a more aromatic product when freshly ground before use.

And allspice has some useful properties besides being a cooking ingredient.

Allspice has been used as a deodorant, for example, and the oils found in the plant contain eugenol, a 'weak antimicrobial agent', so it is a form of natural antibiotic.

The following table shows some of the vitamins and minerals in allspice.  Notice that it is a useful source of potassium. 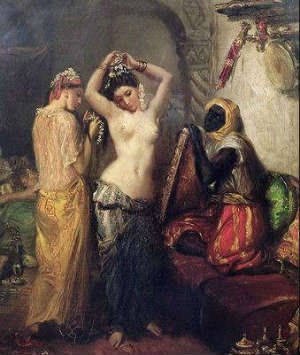 Allspice is one of the most important ingredients of Caribbean cuisine. It is used in Caribbean jerk seasoning and in pickling. It can be used to add an interesting flavour to plain sausage meat, making 'meat patties'. It is delicious in meat chillis and with game dishes, as an alternative, for example to juniper berries.

It is found in some curry recipes and is also indispensable in Middle Eastern cuisine, particularly in the Levant, where it is used to flavour a variety of stews and meat dishes. In Palestinian cuisine, for example, many main dishes call for allspice as the sole spice added for flavouring.

My Mum used to make a savoury sauce from gooseberries, vinegar, molasses and allspice, which was yummy with egg and chips.