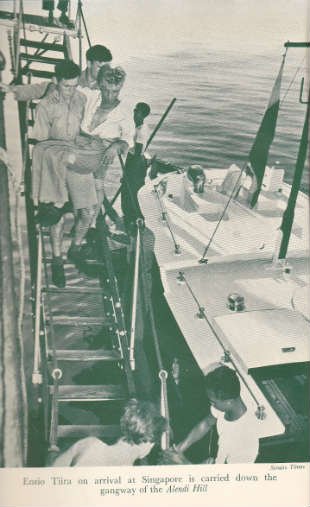 Ensio Tiira was a Finn who joined the French Foreign legion in the 1950s.  Not long after, he got ‘posted’ to Vietnam and was sent by ship to join the fighting.  He and his friend Fred Ericsson decided that this was not what they had joined the legion for and decided to ‘escape’.

As they came to the coast of Sumatra, and in the middle of the night, they ‘jumped ship’  - literally  - helped by some sailors who threw them a rather flimsy life raft.  They took one bottle of wine and one days supply of food, thinking that it would take them about a day to paddle to the coast.

But the wind and current took them away from the coast and they ended up in the middle of the Indian ocean.  They ran out of food early on, but they did catch a small turtle and they used a bottle and a plastic sheet to catch the rain.  The rain, however, was intermittent and Ericsson died, after about 27 days, of dehydration.  All this time they were circled by sharks, who even pushed up into the centre of the raft.  Tiira eventually had to ditch the body of his friend, because the sharks became too frenzied in their attacks.

During this time they saw numerous ships, but none saw them.

Tiiira survived about 33 days and was eventually rescued by a British ship.  He was spotted in the middle of the night by the sharp eyes and ears of a British sailor who was alerted by the sound of the banging of the paddle on the raft.  At the end, Tiira had no light, could not stand and was so weak he couldn’t even wave.