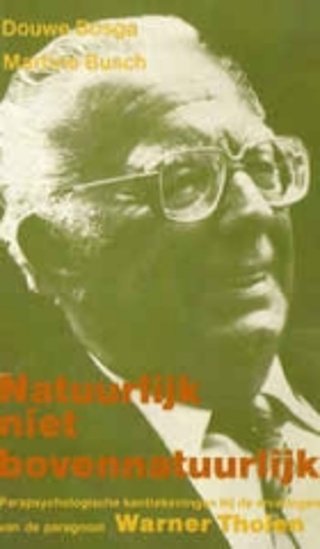 Warner Tholen (1913-1983) was a Dutch psychic, specialising in prophecy, the diagnosis of illness and paragnosis.

Tholen and all the other paragnosts [paragnost was a word which Tenhaeff coined in 1932 from the Greek words para meaning "beyond" and gnosis meaning "knowledge], were studied intensively from around 1926 until Professor Tenhaeff’s death.  Tenhaeff undertook detailed, thorough and carefully recorded observational work on Dutch mediums in general via the Parapsychology Institute.

Some of Tholens achievements are described in the book about  Gerard Croiset, by Jack Harrison Pollack.  At the time of Pollack's book he was described as a protege and friend of Croiset's, and as "a forty-eight-year-old restaurant proprietor in Emmeloord".  Emmeloord is the administrative center of the municipality of Noordoostpolder, Flevoland, Netherlands.

Unfortunately we could find nothing written about Tholen in English, despite his abilities.

One of the principle books to have been written about him, which gives information on his life and some more of his experiences is in Dutch, was published by Ankh-Hermes, Deventer and was published in 1984.

It may be easy to get a copy in the Netherlands, but it is unavailable in the UK.