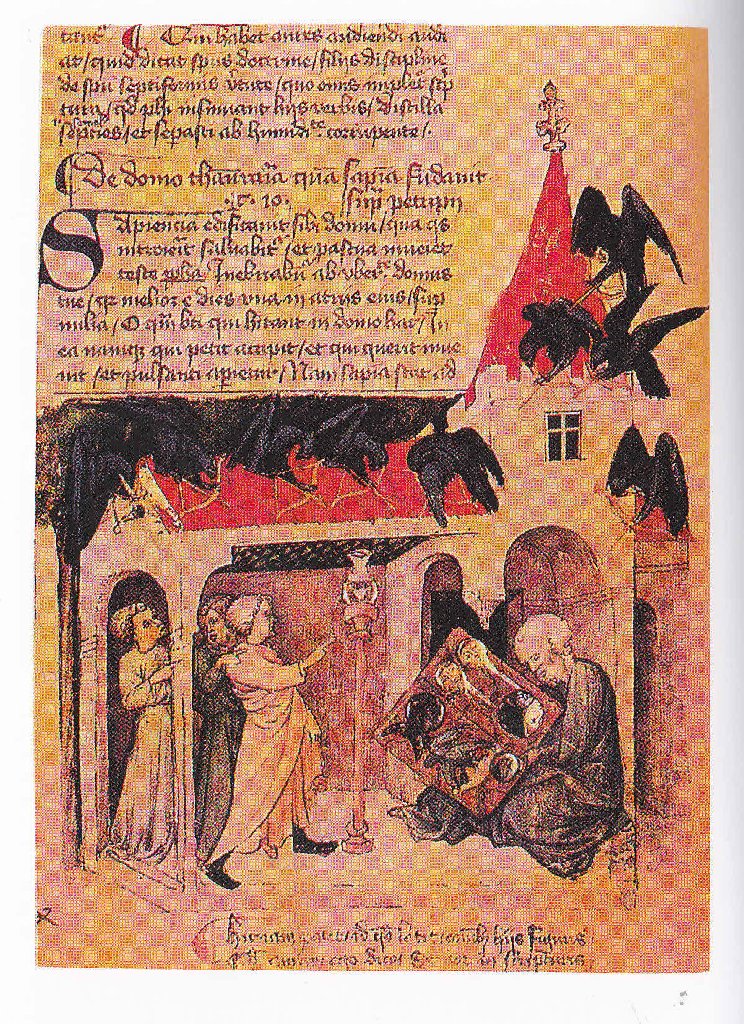 The picture is a depiction linked to the Arab legend of how the Tablet was
discovered in a vault or tomb.  The old man holds the text on is lap

The Emerald Tablet of Hermes Trismegistus, also known as the Smaragdine Table, or Tabula Smaragdina, is a very compact text of Alchemy.

The text of the Smaragdine Tablet gives its author as Hermes Trismegistus, but as it was common in alchemy to adopt the names of past masters in order to provide some safety from persecution, this is unlikely.

It is instead ‘believed to be an Arabic work written between the sixth and eighth centuries’.

Having said this, the oldest documentable source of the text is the Kitāb sirr al-ḫalīqa (Book of the Secret of Creation and the Art of Nature), itself a composite of earlier works, so the original may go back indeed to the Ancient Egyptians. 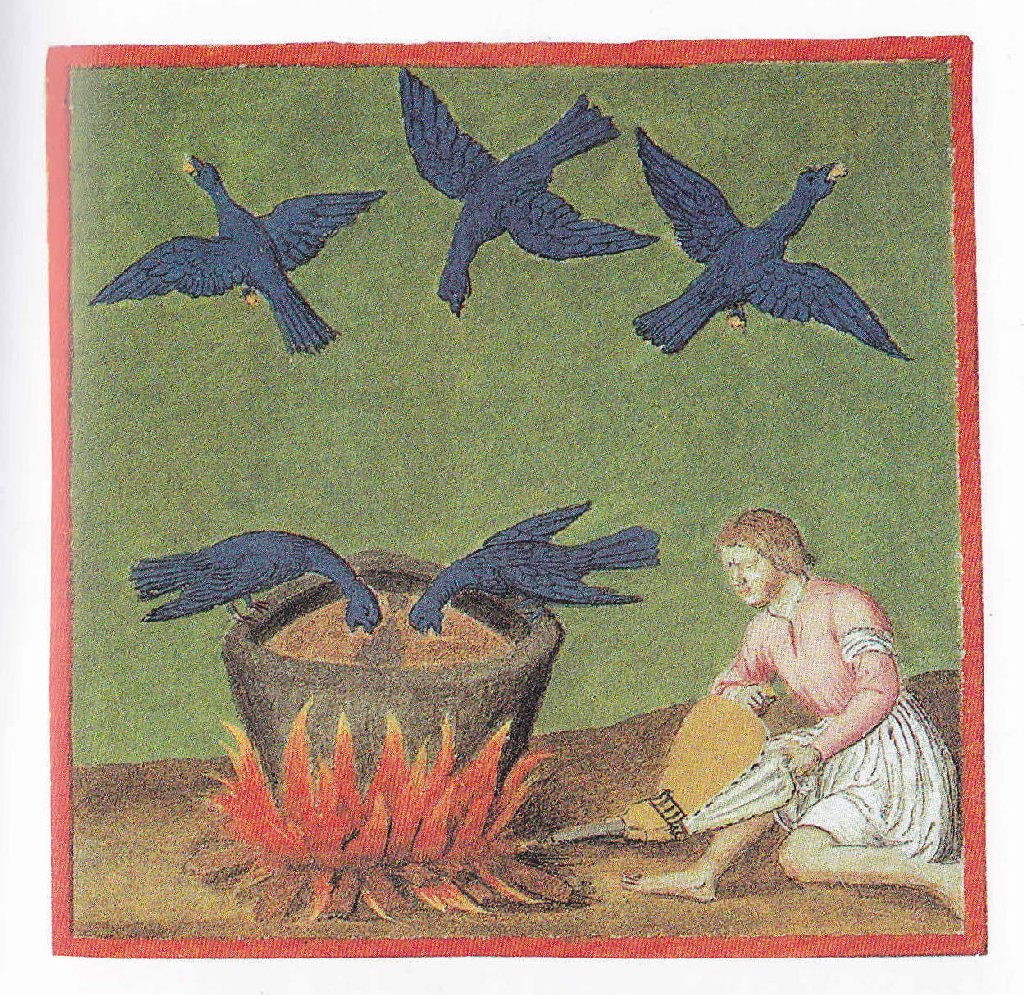 Book of the Secret of Creation and the Art of Nature is attributed to "Balinas".  Balinus is also called  Pseudo-Apollonius of Tyana, Apollonius being an alchemist.  Balinus wrote sometime around the eighth century and  uses alchemical symbolism.  He claims the Emerald Tablet is ancient Hermetic wisdom and that he discovered the text in a vault below a statue of Hermes in Tyana, and that, inside the vault, an old corpse on a golden throne held the emerald tablet.

History of the Tablet - summarised from Needham 1980, & Holmyard 1957
The Tablet probably first appeared in the West in editions of the pseudo-Aristotlean Secretum Secretorum which was actually a translation of the Kitab Sirr al-Asrar, a book of advice to kings which was translated into latin by Johannes Hispalensis c. 1140 and by Philip of Tripoli c.1243. Other translations of the Tablet may have been made during the same period by Plato of Tivoli and Hugh of Santalla, perhaps from different sources.
The date of the Kitab Sirr al-Asrar is uncertain, though c.800 has been suggested and it is not clear when the tablet became part of this work.
Holmyard was the first to find another early arabic version (Ruska found a 12th century recension claiming to have been dictated by Sergius of Nablus) in the Kitab Ustuqus al-Uss al-Thani (Second Book of the Elements of Foundation) attributed to Jabir. Shortly after Ruska found another version appended to the Kitab Sirr al-Khaliqa wa San`at al-Tabi`a (Book of the Secret of Creation and the Art of Nature), which is also known as the Kitab Balaniyus al-Hakim fi'l-`Ilal (book of Balinas the wise on the Causes). It has been proposed that this book may have been written as early as 650, and was definitely finished by the Caliphate of al-Ma'mun (813-33).
Scholars have seen similarities between this book and the Syriac Book of Treasures written by Job of Odessa (9th century) and more interestingly the Greek writings of the bishop Nemesius of Emesa in Syria from the mid fourth century. However though this suggests a possible Syriac source, none of these writings contain the tablet.
Ruska has suggested an origin further east, and Needham has proposed an origin in China.  Holmyard, Davis and Anon all consider that this Tablet may be one of the earliest of all alchemical works we have that survives.
It should be remarked that apparently the Greeks and Egyptians used the term translated as `emerald' for emeralds, green granites, "and perhaps green jasper". In medieval times the emerald table of the Gothic kings of Spain, and the Sacro catino- a dish said to have belonged to the Queen of Sheba, to have been used at the last supper, and to be made of emerald, were made of green glass [Steele and Singer: 488]. 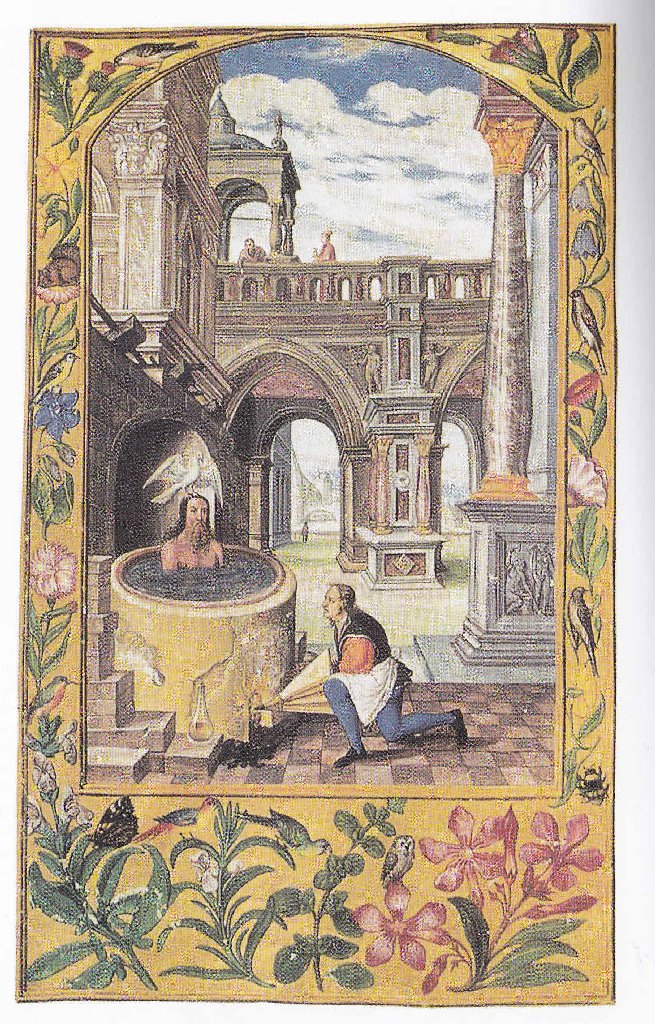 So there you are!

The observations are all alternative translations of the same text.

It is relatively easy to list the symbols used in the text, although as I have provided several alternatives, there is some repetition symbolically.  If you are completely new to any form of spiritualism or alchemical texts, however, you will not understand it even with the symbols to refer to.

Thus it may be helpful to first read the following detailed explanations on this website.  They cover all the symbols in the text, but combine definition as well as explanation.  This should provide the grounding you need:

This should provide a grounding for the text, as well as help in understanding the rest of the site too.