From Wikipedia, I have extracted from the description which is far longer than this precis 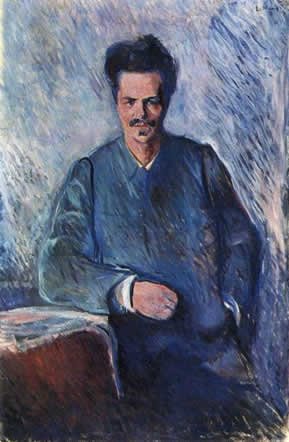 Portrait of Strindberg by Edvard Munch

Johan August Strindberg (22 January 1849 – 14 May 1912) was a Swedish playwright, novelist, poet, essayist, theosophist, photographer, alchemist and painter. He was also a manic depressive.

Strindberg's paintings were unique for their time, and went beyond those of his contemporaries for their radical lack of adherence to visual reality. The 117 paintings that are acknowledged as his, were mostly painted within the span of a few years, and are now seen by some as among the most original works of 19th-century art. Today, his best-known pieces are stormy, expressionist seascapes, selling at high prices in auction houses, “the spontaneous and subjective expressiveness of his landscapes and seascapes can be ascribed to the fact that he painted only in periods of personal crisis”.

Strindberg's career spanned four decades, during which time he wrote over 60 plays and more than 30 works of fiction, autobiography, history, cultural analysis, and politics. The Royal Theatre rejected his first major play, Master Olof, in 1872; it was not until 1881, at the age of 32, that its première at the New Theatre gave him his theatrical breakthrough. His plays include The Father (1887), Miss Julie (1888), and Creditors (1889), In his essays he explored the theory of Naturalism, essays include "On Psychic Murder" (1887), and "On Modern Drama and the Modern Theatre" (1889).

A bold experimenter, he explored a wide range of dramatic methods, from naturalistic tragedy, monodrama, and history plays, to his anticipation of expressionist and surrealist dramatic techniques. From his earliest work, Strindberg developed forms of dramatic action, language, and visual composition so innovative, that many were to become technically possible to stage only with the advent of film. He is considered the "father" of modern Swedish literature and his The Red Room (1879) has frequently been described as the first modern Swedish novel.

The Red Room is a satire of Stockholm society. While receiving mixed reviews in Sweden, it was acclaimed in Denmark, where Strindberg was hailed as a genius. Strindberg explained that:

I am a socialist, a nihilist, a republican, anything that is anti-reactionary!... I want to turn everything upside down to see what lies beneath; I believe we are so webbed, so horribly regimented, that no spring-cleaning is possible, everything must be burned, blown to bits, and then we can start afresh...

A prolific writer, he often drew directly on his personal experience. In his plays, for example, characterisation tends to replace plot as the predominant dramatic element and the determining role of heredity and the environment on the "vacillating, disintegrated" characters is emphasized.

The history of his mental illness can be traced to a truly traumatic childhood. In his autobiographical novel The Son of a Servant, Strindberg describes a childhood affected by "emotional insecurity, poverty, religious fanaticism and neglect." He attended a harsh school in Klara for four years, an experience that haunted him in his adult life. His mother was fanatically religious, following Pietism. She also deeply resented her son's intelligence. When he was thirteen, she died. Though his grief lasted for only three months, in later life he came to feel a sense of loss and longing for an idealised maternal figure. Less than a year after her death, his father married the children's governess, Emilia Charlotta Pettersson and, according to his sisters, Strindberg came to regard them as his worst enemies.

His problems were not to end in his childhood. He married for love, but the couple's child was born prematurely on 21 January 1878 and died two days later. On 9 January 1879, Strindberg was declared bankrupt.

In 1884 Strindberg wrote a collection of short stories, Getting Married, that presented women in an egalitarian light. Two groups "led by influential members of the upper classes, supported by the right-wing press" promptly instigated his prosecution for blasphemy, a charge on which he was tried, but acquitted. By the end of that year Strindberg was in a despondent mood: "My view now is," he wrote, "everything is shit. No way out. The skein is too tangled to be unravelled. It can only be sheared. The building is too solid to be pulled down. It can only be blown up."  In May 1885 he wrote: "I am on my way to becoming an atheist." And atheist [of sorts] he became.

His mental illness often surfaced as paranoia and sexual difficulties. It is worth noting that in the depressive phase of manic depression, sufferers often experience both abhorrence of sex and impotence. The strain on his marriage was enormous, but in 1888, after a separation and reconciliation with Siri his wife, he founded the Scandinavian Experimental Theatre in Copenhagen, where Siri became manager.

Less than a year later, both the theatre and reconciliation were defunct; he moved back to Sweden, while Siri moved back to her native Finland with the children. While there, he rode out the final phase of the divorce and later used this agonizing ordeal for the basis of The Bond and the Link (1893). His play The Keys of Heaven (1892) was inspired by the loss of his children in his divorce.

In 1892, he experienced writer's block, which led to a drastic reduction in his income. Abject depression followed as he was unable to meet his financial obligations and to support his children and former wife. But not long afterwards, his attention turned to Frida Uhl, who was twenty-three years younger than him. They were married in 1893. 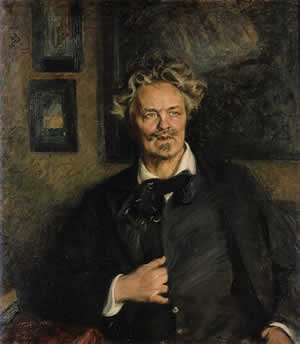 Less than a year later, their daughter Kerstin was born and the couple separated, though their marriage was not officially dissolved until 1897.

Strindberg was to marry and separate three times.

Even later during his life he met the young actress and painter Fanny Falkner who was 41 years younger than Strindberg. He also had a brief affair in Berlin with Dagny Juel before his marriage to Frida; but she was murdered in 1901.

Thus as we can see Strindberg suffered all the effects of a manic depressive in his manic passions followed by his depressive rejections and the cycles were very short and agonisingly swift.

Strindberg may have declared himself an atheist, but he was deeply interested in all things spiritual. He co-founded the Rune Society, a small literary club whose members adopted pseudonyms taken from runes of the ancient Teutonic alphabet – Strindberg called himself Frö (Seed), after the god of fertility. He studied the works of Søren Kierkegaard and Georg Brandes. And in line with his belief that you have to start afresh and reject all belief systems to create a spiritually aligned society, he turned to Friedrich Nietzsche's philosophies. He also became interested in the psychological theories of the Nancy School, which advocated the use of hypnosis.

Strindberg was deeply interested in symbolism too. When he ended his interest in Naturalism, he began to produce works informed by Symbolism - The Dance of Death, A Dream Play, and The Ghost Sonata are well-known plays from this period.

His illness deeply influenced his beliefs in the spiritual world. It is interesting to compare his beliefs with those of John Custance, another manic depressive.  There are some striking parallels. "The Powers" became central to Strindberg's later work. He said "the Powers" were an outside force that had caused him his physical and mental suffering. Strindberg believed for the rest of his life that the relationship between the spiritual and the real world was described by a series of "correspondences" [symbolic messages] and that everyday events were really messages from the spiritual world of which only the enlightened could make sense. He also felt he was chosen by Providence to atone for the moral decay of others [this is the manic stage] and felt his tribulations were payback for misdeeds earlier in his life [the depressive phase].

During the 1890s he spent significant time abroad engaged in scientific experiments and studies of the occult. A series of psychotic attacks between 1894 to 1896 (referred to as his "Inferno crisis") led to his hospitalisation and return to Sweden. Following the inner turmoil that he experienced during the "Inferno crisis," he wrote a book in French, Inferno (1896–7) in which he describes his experiences. For those interested in manic depression this is essential reading. In the book described by one reviewer as “a paranoid and confusing tale of his years in Paris” he even claimed to have successfully performed alchemical experiments and cast black magic spells on his daughter. 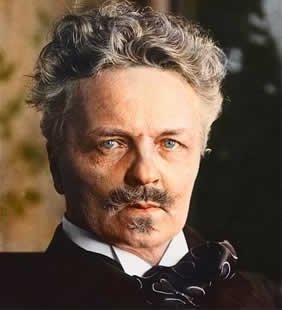 Under the influence of the ideas of Emanuel Swedenborg, he resolved after his recovery to become "the Zola of the Occult." In 1898 he returned to playwriting with To Damascus, which, like The Great Highway (1909), is a play of 'spiritual pilgrimage', the spiritual path.

His A Dream Play (1902) was a radical attempt to dramatise the workings of the unconscious, by means of an abolition of conventional dramatic time and space and the splitting, doubling, merging, and multiplication of its characters. It was an important precursor to both expressionism and surrealism.

During Christmas 1911, Strindberg became sick with pneumonia and he never recovered completely. He also started to suffer from a stomach disease, possibly cancer. He died on 14 May 1912 at the age of 63.

Eugene O'Neill, upon receiving the Nobel Prize in Literature, dedicated much of his acceptance speech to describing Strindberg's influence on his work, and referred to him as "that greatest genius of all modern dramatists."