Simon the Sorcerer or Simon the Magician, in Latin Simon Magus, was a Samaritan magus and a convert to Christianity, baptised by Philip the Evangelist.  The stories about him vary enormously, principally because subsequent rewritings of the gospels have cast him into the role of the universal baddy.  The ‘official version’ written to bring him into disrepute has him having a confrontation with Peter which is is recorded in Acts 8:9–24. 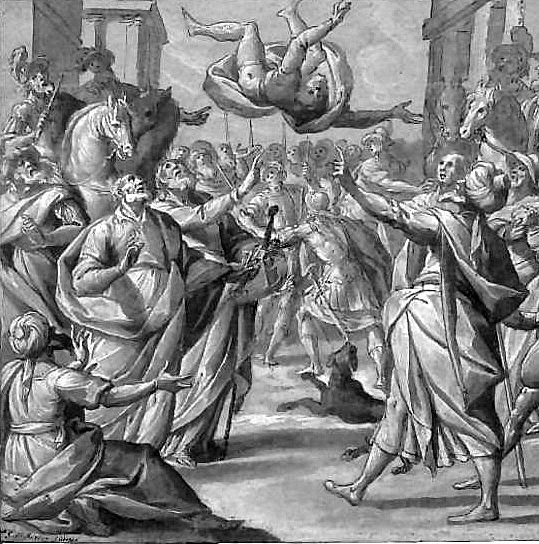 But there was a certain man, called Simon, which beforetime in the same city used sorcery, and bewitched the people of Samaria, giving out that himself was some great one: to whom they all gave heed, from the least to the greatest, saying, “This man is the great power of God.”  And to him they had regard, because that of long time he had bewitched them with sorceries.

But when they believed Philip preaching the things concerning the kingdom of God, and the name of Jesus Christ, they were baptized, both men and women. Then Simon himself believed also: and when he was baptized, he continued with Philip, and wondered, beholding the miracles and signs which were done. 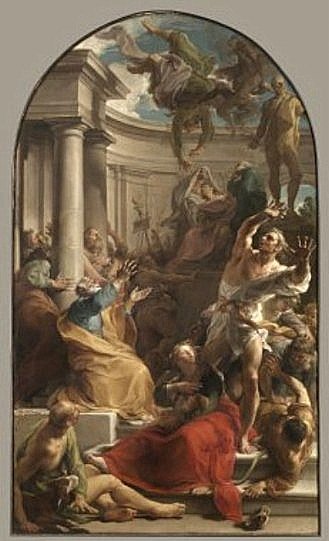 Now when the apostles which were at Jerusalem heard that Samaria had received the word of God, they sent unto them Peter and John: who, when they were come down, prayed for them, that they might receive the Holy Ghost: (for as yet he was fallen upon none of them: only they were baptized in the name of the Lord Jesus.)

Then laid they their hands on them, and they received the Holy Ghost. And when Simon saw that through laying on of the apostles’ hands the Holy Ghost was given, he offered them money, saying, “Give me also this power, that on whomsoever I lay hands, he may receive the Holy Ghost.” But Peter said unto him, “Thy money perish with thee, because thou hast thought that the gift of God may be purchased with money. Thou hast neither part nor lot in this matter: for thy heart is not right in the sight of God. Repent therefore of this thy wickedness, and pray God, if perhaps the thought of thine heart may be forgiven thee, for I perceive that thou art in the gall of bitterness, and in the bond of iniquity.” Then answered Simon, and said, “Pray ye to the Lord for me, that none of these things which ye have spoken come upon me.”

So Peter cursed him.  The poor man is also charged in some ‘official’ texts with being ‘the source of all heresies’. 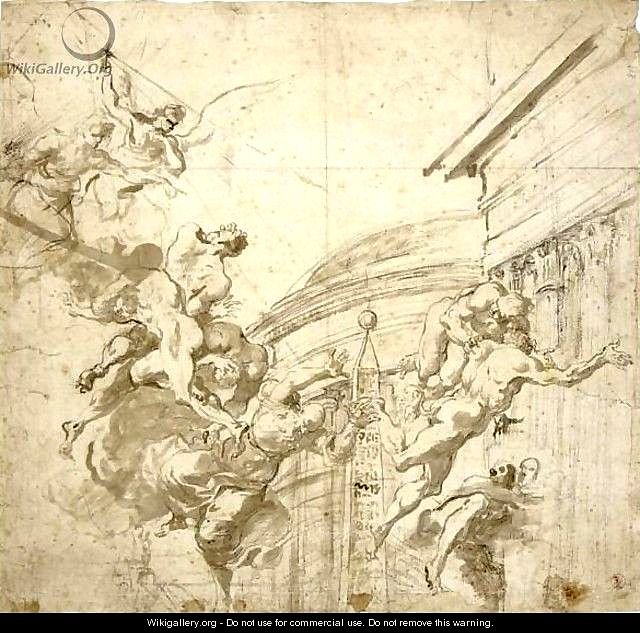 Why should the accounts of Simon seek to reduce him to the role of the universal baddy?

It appears from more reliable accounts that Simon was a major thorn in the side of the early Christian church, as he did not conform to the view they wished to promote.  Christianity was based on moral guidelines [said to come from ‘God’], and suppression based techniques.  Simon denied the existence of morals in the spiritual world and used overload techniques.

So in essence we have here a battle for methods and mechanisms of spiritual experience – probably the first real battle within the history of Christianity, so absolutely crucial from the church's point of view and indeed rather exciting.

Simon could have been a sorceror or magician we don’t know  - but he appears to be knowledgeable about the spiritual world, powerful as a magician and have had some quite profound experiences.  And he was very influential, Irenaeus held him as being one of the founders of Gnosticism. 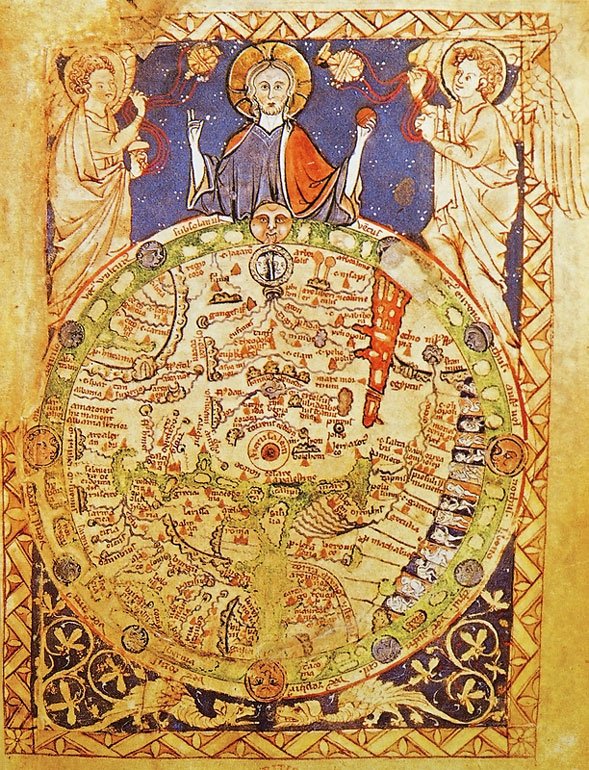 Spiritual map with the four quarters

Hippolytus quotes from a work he attributes to Simon or his followers the Simonians, Apophasis Megale, or Great Declaration. And Simon is also supposed to have written several lost treatises, two of which bear the titles The Four Quarters of the World and The Sermons of the Refuter.  So in some senses he was trying to keep some of the old spiritual truths alive in the face of some extremely stiff opposition.

In the Acts of Peter, Pseudo-Clementines, and the Epistle of the Apostle, Simon appears as a formidable man with the ability to levitate, have out of body experiences and heal.  Given that the Acts of Peter is intended to raise the status of Peter and reduce that of Simon, it makes for interesting reading, as it is clear there was an almighty battle for supremacy between Peter and Simon and both appeared to use magic.

“The apocryphal Acts of Peter describes a time when Simon is performing magic in the Forum, and in order to prove himself to be a ‘god’, he levitates up into the air above the Forum. The apostle Peter prays to stop his flying, and he stops mid-air and falls, breaking his legs "in three parts". The previously non-hostile crowd then stones him” 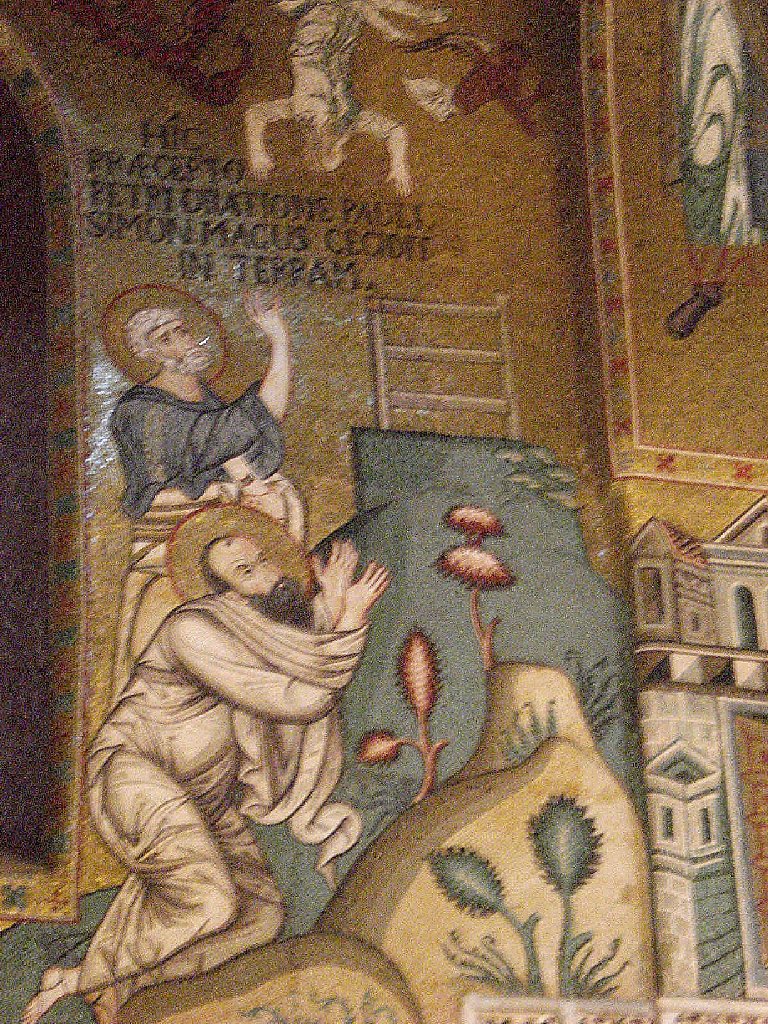 There is reason to believe that this account is based on a true event, as the Acts of Peter and Paul, although giving a slightly different version of the above incident, is broadly similar.  In this account the battle of the two magicians – Paul and Simon took place in front of the Emperor Nero, which gives us some idea of how high the stakes were. In this version, Paul the Apostle is present along with Peter.  Simon “levitates from a high wooden tower made upon his request, and dies …due to the fall”.  [Except that his death is differently recorded elsewhere].

So as we can see there was also a lot at stake in these contests of the two magicians – it is the battle of two belief systems - two approaches.

“The Pseudo-Clementine writings were used in the 4th century by members of the Ebionite sect.  In their texts, the enmity between Peter and Simon is clearly shown. Simon's magical powers are juxtaposed with Peter's powers in order to express Peter's authority over Simon through the power of prayer”.

Simon’s other beliefs were also totally at odds with those of the new theologians.  He taught reincarnation.  Furthermore he taught that morals were a man made thing and not a product of the spiritual world, that God was not the Father figure being promoted by the church, but a super intelligence and that there was a hierarchy of intelligences. 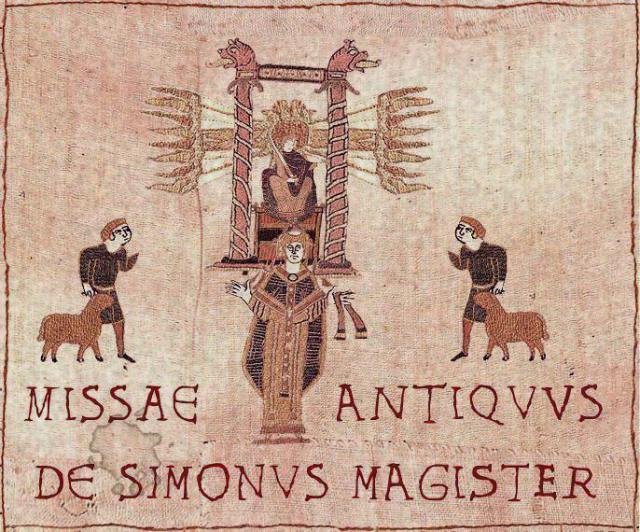 “Simon's opinion is that he denied that God was ‘just’…. But he undertakes to prove from Scripture that there is a higher God….. On these grounds Peter complains that, when he was setting out for the Gentiles to convert them from their worship of many gods upon earth, Simon had gone before him to make them believe that there were many gods in heaven”.

He also taught that there was a Higher spirit and a female principle  - with which one could merge and he also taught human love as the means by which one reached the Higher spirit – in this he used making love, love with visualisation and sex magick.  Simon’s mistress was Helen, a former disciple of John the Baptist and she went with him everywhere.  The use of love with visualisation we know because “he took her about with him, saying that she had come down into the world from the highest heavens, and was his mistress, inasmuch as she was Sophia, the Mother of All”.

As you can see there is not much here with which the Institutionalised church would agree.  Hippolytus, who was not without bias when it comes to accounts of Simon, was however quite open about these practises:

“Hippolytus says the free love doctrine was held by them in its purest form, and speaks in language similar to that of Irenaeus about the variety of magic arts practiced by the Simonians”.

His end was very sad.  Reduced to despair, he says, by the curse laid upon him by Peter, Simon wandered around trying to keep the message going against ever increasing odds, according to Hippolytus:

Until he came to Rome also and fell foul of the Apostles. Peter withstood him on many occasions. At last he came [. . .] and began to teach sitting under a plane tree. When he was on the point of being shown up, he said, ... that if he were buried alive he would rise again on the third day. So he bade that a tomb should be dug by his disciples and that he should be buried in it. Now they did what they were ordered, but he remained there:

Being buried alive is a standard yogi trick to show you have control of your bodily functions, it is magic in a sense, but the objective is to go into a trance state in order to survive.  His disciples didn’t understand this it seems. They never dug him up.  So he died, buried alive.

Goethe’s Faust is based on Simon.