The following description is largely derived from that on Wikipedia

Saint Catherine of Sienna, T.O.S.D. (25 March 1347 in Sienna – 29 April 1380 in Rome), was a tertiary of the Dominican Order. She also worked to bring the papacy of Gregory XI back to Rome from its displacement in France and to establish peace among the Italian city-states. She is one of the two patron saints of Italy, along with St. Francis of Assisi.

Her major treatise is The Dialogue of Divine Providence. This was probably begun in October 1377, and was certainly finished by November 1378. Contemporaries of Catherine are united in asserting that much of the book was dictated while Catherine was having spiritual experiences.  It was then edited later.  The editing is the interpretation, which of course is strongly influenced by her beliefs.

Catherine ranks high among the mystics and spiritual writers of the Church. She remains a greatly respected figure for her spiritual writings, and political boldness to "speak truth to power"— it being exceptional for a woman, in her time period, to have had such influence in politics and on world history.

Caterina di Giacomo di Benincasa was born on 25 March 1347 in black death-ravaged Sienna, Italy, to Giacomo di Benincasa, a cloth dyer who ran his enterprise with the help of his sons, and Lapa Piagenti. Lapa was about forty years old when she prematurely gave birth to twin daughters, Catherine and Giovanna. She had already borne 22 children, but half of them had died. Giovanna was handed over to a wet-nurse, and died, whereas Catherine was nursed by her mother, and developed into a healthy child. 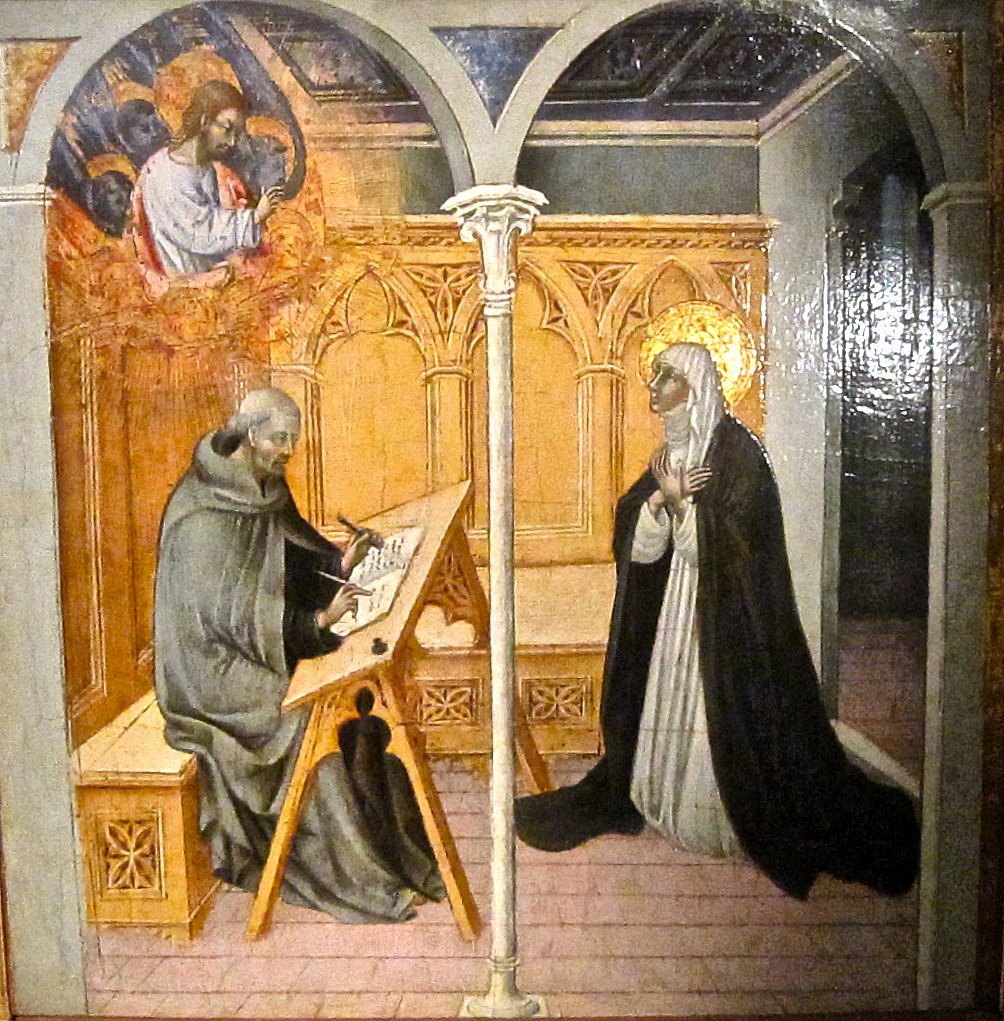 Catherine is said by her confessor and biographer Raymond of Capua O.P.,’s Life to have had her first vision when she was the age of five or six. With her brother she was on the way home from a visit to a married sister, and is said to have experienced 'a vision of Christ seated in glory with the Apostles Peter, Paul, and John'. Raymond continues that at age seven, Catherine vowed to give her whole life to God.

Her older sister Bonaventura died in childbirth. While tormented with sorrow, sixteen-year-old Catherine was now faced with her parents' wish that she marry Bonaventura's widower. Absolutely opposed to this, she started a massive fast, something she had learnt from Bonaventura, ‘whose husband had not been considerate in the least’. Bonaventura had refused to eat until he showed better manners. This had taught Catherine the power of fasting. She disappointed her mother by cutting off her long hair as a protest against being encouraged to improve her appearance in order to attract a husband. 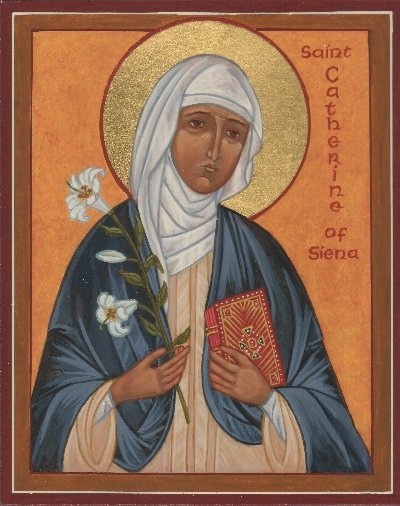 Catherine would later advise Raymond of Capua to do during times of trouble what she did now as a teenager: "Build a cell inside your mind, from which you can never flee."

Catherine resisted the accepted course of marriage and motherhood, on the one hand, or a nun's veil, on the other and chose to live an active and prayerful life outside a convent’s walls following the model of the Dominicans. Eventually her father gave up and permitted her to live as she pleased.

A vision of St. Dominic gave strength to Catherine, but her wish to join his Order was no comfort to Lapa, who took her daughter with her to the baths in Bagno Vignoni to improve her health. Catherine fell seriously ill with a violent rash, fever and pain, and terrified,  her mother accepted her wish to join the "Mantellate", the local association of Dominican tertiaries.

“Within days, Catherine seemed entirely restored, rose from bed and donned the black and white habit of the Third Order of St. Dominic. Catherine received the habit of a Dominican tertiary from the friars of the Order, however, only after vigorous protests from the Tertiaries themselves, who up to that point had been only widows. As a tertiary, she lived outside the convent, at home with her family like before. The Mantellate taught Catherine how to read, and she lived in almost total silence and solitude in the family home.”

Her custom of giving away clothing and food without asking anyone's permission cost her family significantly.

She also said she did not want their food, referring to the table laid for her in Heaven with her real family. 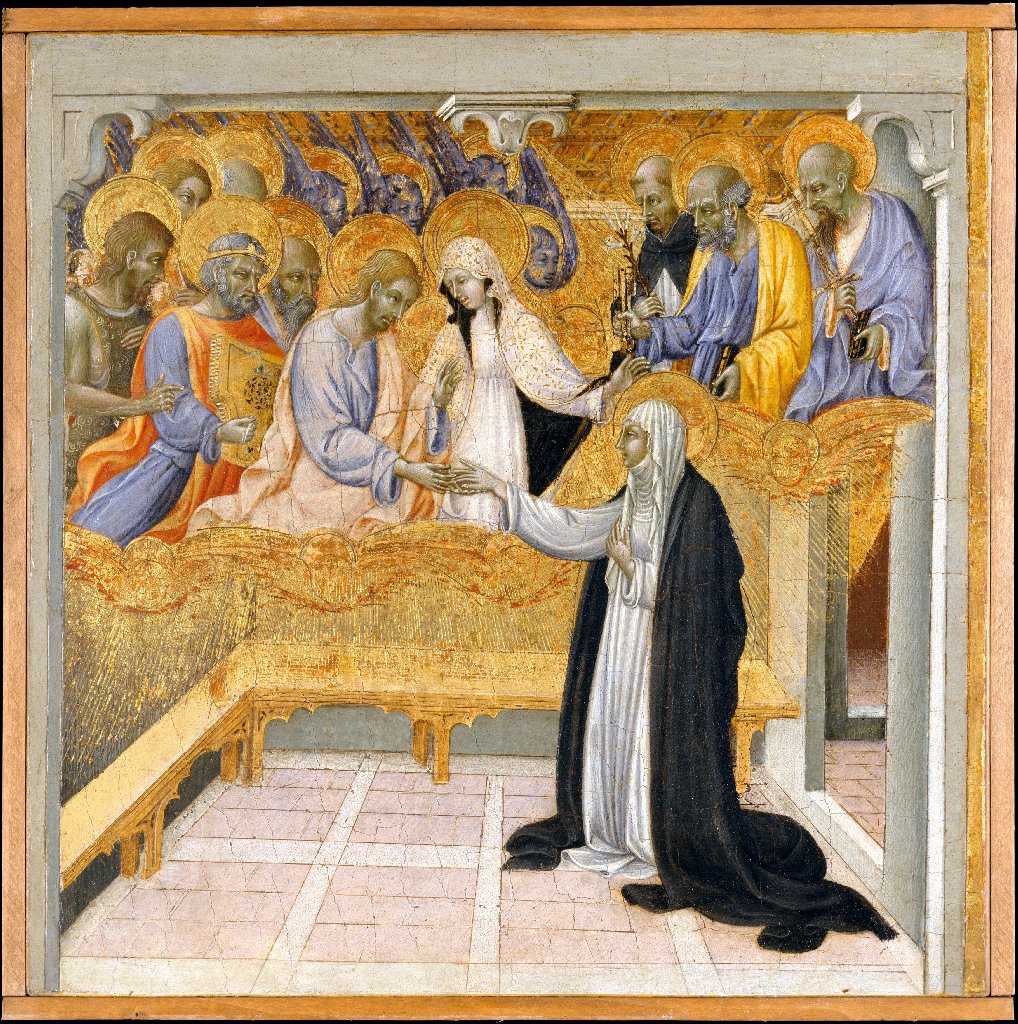 In about 1368, aged twenty-one, Catherine experienced what she described in her letters as a "Mystical Marriage" with Jesus, later a popular subject in art as the Mystic marriage of Saint Catherine.  Raymond records that she was told by Christ to leave her withdrawn life and enter the public life of the world. So, Catherine rejoined her family, and began helping the ill and the poor, where she took care of them in hospitals or homes. Her early activities in Sienna attracted a group of followers, both women and men, who gathered around her.

She made her first journey to Florence in 1374, and at this time she acquired Raymond of Capua [her biographer] as her confessor and spiritual director.  After this visit, she began travelling with her followers throughout northern and central Italy advocating reform of the clergy.  Physical travel was not the only way in which Catherine made her views known. From 1375 onwards, she began dictating letters to various scribes. These letters were intended to reach men and women of her circle, increasingly widening her audience to include figures in authority as she begged for peace between the republics and principalities of Italy and for the return of the Papacy from Avignon to Rome. She carried on a long correspondence with Pope Gregory XI, asking him to reform the clergy and the administration of the Papal States.  She was not entirely successful, as of course the Church is a political institution and much of what was transpiring at the time was political, having nothing to do with the teachings of Jesus.

Catherine returned to Siena, and spent the early months of 1377 founding a women's monastery of strict observance outside the city in the old fortress of Belcaro. She spent the rest of 1377 at Rocca d'Orcia, about twenty miles from Siena, on a local mission of peace-making and preaching. During this period, in autumn 1377, she both had the experience which led to the writing of her Dialogue, and learned to write herself, although she still seems to have chiefly relied upon her secretaries for her correspondence. 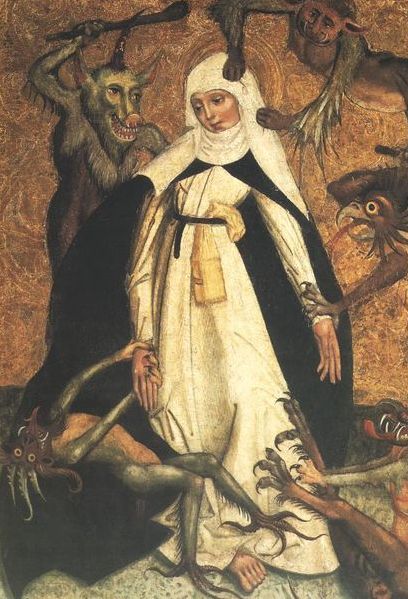 What needs to be borne in mind at this stage, is that Catherine would have been classified these days as an anorexic.  She was also, according to her own biographer, subject to acts of binge eating followed by purging, which makes her more correctly a bulimic.  ‘This extreme fasting appeared unhealthy in the eyes of the clergy and her own sisterhood, and her confessor, Blessed Raymond, ordered her to eat properly. But Catherine claimed that she was unable to, describing her inability to eat as an infermità (illness). From the beginning of 1380, Catherine could neither eat nor swallow water. On February 26 she lost the use of her legs.’