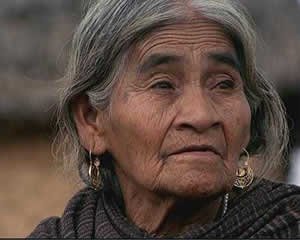 María Sabina (ca. 1894- 1985) was a Mazatec curandera [healer] who lived her entire life in a modest dwelling in the Sierra Mazateca of southern Mexico. Her practice was based on the use of the various species of native psilocybe mushrooms, such as Psilocybe mexicana.

María was born outside of Huautla de Jimenez in the Sierra Mazateca towards the end of the 19th century, perhaps in 1894 ,although Sabina herself was not sure. Her parents were both humble campesinos.  Her mother María Concepcion and her father Crisanto Feliciano, died from an illness when she was three years old. She had a younger sister María Ana. Her grandfather and great grandfather on her father's side were also wise men, skilled in using the mushroom to communicate with the gods.

After the death of her father, her mother took the family to live with her parents, and Sabina grew up in the house of her maternal grandparents.

María Sabina was the first contemporary Mexican curandera, defined as a native shaman, to allow Westerners to participate in the healing vigil that became known as the velada, where all participants partake of the psilocybin mushroom as a sacrament to open the gates of the mind. The velada is seen as a purification and as a communion with the sacred.

In 1955, the US banker and ethnomycologist R. Gordon Wasson visited María Sabina's hometown of Huautla de Jimenez, Oaxaca, and participated in a velada with her. He also brought spores of the fungus, which he identified as Psilocybe mexicana, to Paris. The fungus was cultivated in Europe and its active ingredient was duplicated as the chemical psilocybin in the laboratory by Swiss chemist Albert Hofmann in 1958.

US youth began seeking out María Sabina and the "holy children" as early as 1962, and in the years that followed, thousands of counterculture mushroom seekers, scientists, and others arrived in the Sierra Mazateca, and many met her. By 1967 more than 70 people from the US, Canada, and Western Europe were renting cabins in neighbouring villages. Many of them went there directly after reading "Seeking the Magic Mushroom", a 1957 Life magazine article written by Wasson about his experiences.

Sabina cultivated relationships with several of them, including Wasson, who became something of a friend. Many 1960s celebrities visited María Sabina, including rock stars such as Bob Dylan, John Lennon, Mick Jagger and Keith Richards.

While she was initially hospitable to the people thronging to her, their lack of respect for the sacred and traditional purposes, caused María Sabina to remark:

"Before Wasson, nobody took the children simply to find God. They were always taken to cure the sick."

Many of the travelers were penniless, and they contributed little to the local economy, especially when they learned to find the mushrooms on their own.

Late in life, María Sabina became bitter about her many misfortunes, and how others had profited from her name. Nevertheless, late in her life she confided to Joan Halifax that the dissemination of the knowledge of the sacred mushroom was her fate, that it was pre-ordained by God that she met Wasson. She also felt that the ceremony of the velada had been desecrated and irremediably polluted by the hedonistic use of the mushrooms:

"From the moment the foreigners arrived, the 'holy children' lost their purity. They lost their force, they ruined them. Henceforth they will no longer work. There is no remedy for it."