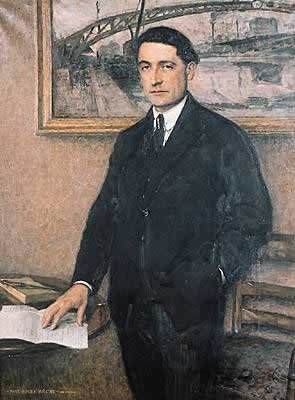 Jules Romains, born Louis Henri Jean Farigoule (1885 –1972), was a French poet and writer and the founder of the ‘Unanimism’ literary movement. He is best known for works such as  Knock ou le Triomphe de la médecine, and a cycle of works called Les Hommes de bonne volonté (Men of Good Will) – which relates the story over a quarter century of two friends, the writer Jallez and politician Jerphanion, who provide an example in literature of Unanimism.

He was close to the Abbaye de Créteil, a utopian group founded in 1906 by Charles Vildrac and René Arcos, which brought together, among others, the writer Georges Duhamel, the painter Albert Gleizes and the musician Albert Doyen.   He was also friends with Anatole France, who became a key witness in Romains’ perhaps lesser known activity – his experiments in the spiritual world.

Romains came to some very illogical conclusions about how he and numerous volunteers could ‘see’, putting it down eventually to the cells in our skin acting as lenses, but his experiments and his descriptions testify to both the efficacy of this technique in providing spiritual experience  - he eventually went out of body - and the workability of the steps needed to achieve it.