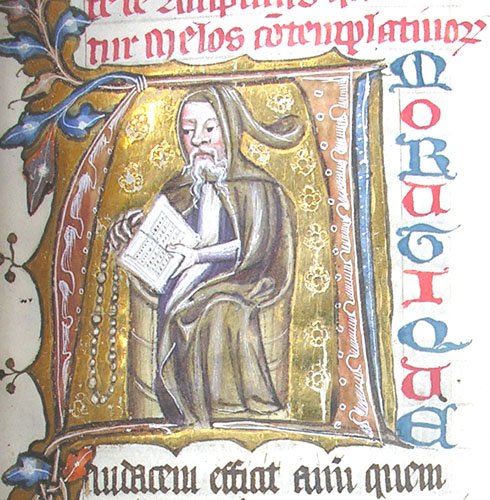 From f.41r of MS B.1, a collection of writings
by Richard Rolle, the 'hermit of Hampole'
(English, 15th century).

Richard Rolle (1290/1300– 1349]) was an English mystic and hermit. He is also known as Richard Rolle of Hampole or de Hampole, since after years of wandering he settled near the Cistercian nunnery in Hampole, Yorkshire.

We don't know much about him, as Rolle himself provides little explicit evidence about his own life; much of the evidence relating to his life is drawn from the Office of lessons and antiphons which was drawn up in the 1380s in preparation for the canonisation of the hermit [although this never happened].

He was born into a small farming family and brought up at Thornton-le-Dale, near Pickering, he studied at the University of Oxford, where he was sponsored by Thomas de Neville, the Archdeacon of Durham, but he left Oxford at age eighteen or nineteen - dropping out before he received his MA - to become a hermit.

It was probably whilst living in Pickering, 'two years and eight months after becoming a hermit', that Rolle had his first mystical experience. As experiences go it wasn't that profound, but it includes the 'heat of the mystic' and a feeling of bliss and joy and the experiences became far more significant over time as you will see from the observations ...........

"I felt within me a merry and unknown heat...I was expert it was not from a creature but from my Maker, as it grew hotter and more glad."

In one of his best-known works, Incendium Amoris (The Fire of Love), Rolle provides an account of his mystical experiences, which he describes as being of three kinds: a physical warmth in his body, a sense of wonderful sweetness, and a heavenly music that accompanied him as he chanted the Psalms. So he was a hearer of celestial music – songlines.

Around a year later, he felt similarly after listening to a choir, and he began to take less interest in all things temporal. Thus as we can see his principal mechanisms of experience were listening to music and a form of isolation, which in this context was through finding a 'safe house/retreat' in which to live [reducing threats] owned by a man called Dalton. 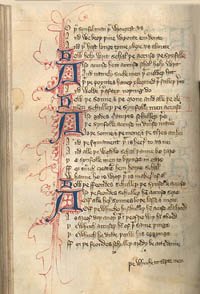 Dalton himself was arrested and his lands confiscated in 1322, but by then Rolle appears to have moved on, but we do not know where he moved to or even precisely what he did.
“ Scholars ....... are divided on the authenticity of material about Rolle's life after leaving Dalton ..... it is probable that most if not all of this time was spent in Richmondshire, either living with his family at Yafforth, or, given the uncertain political conditions in the region at the time, wandering from patron to patron”

By the mid 1300s, Rolle appears to have lived with the nuns in the Cistercian nunnery at Hampole. He wrote The Form of Living and his English Psalter for a nun there, Margaret Kirkby (who later took up a similar life to Rolle, as an anchoress), and Ego Dormio for a nun at Yedingham. Margaret Kirkby was the recipient of much of his writings and would be important in establishing his later reputation. 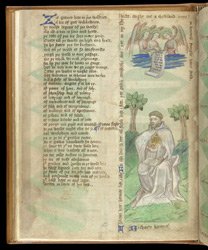 Rolle died in Michaelmas 1349 at the Cistercian nunnery at Hampole where he appears to have been looked after in his later years. There is some speculation that he died of the Black Death.

After his death, Richard Rolle inspired a flourishing cult, especially in the north of England, which was still active at the time of the English Reformation. Rolle's works were widely read in the fourteenth and fifteenth centuries, more so even than Chaucer. Rolle’s work was not, however, uncontroversial. He was criticised by Walter Hilton and the author of The Cloud of Unknowing; also on this site.