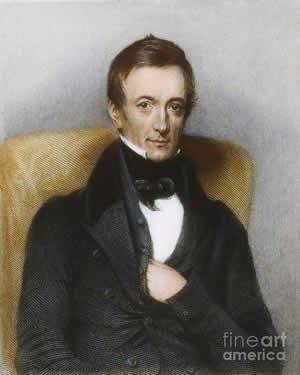 Peter Mark Roget FRS (1779 – 1869) was a British physician and lexicographer who is best known for publishing, in 1852, the Thesaurus of English Words and Phrases (Roget's Thesaurus). Roget retired from professional life in 1840 and about 1848 began preparing for publication the one work that was to perpetuate his memory. Its first printed edition, in 1852, was called Thesaurus of English Words and Phrases Classified and Arranged so as to Facilitate the Expression of Ideas and Assist in Literary Composition! Accurate if a little long. During his lifetime the work had twenty-eight editions; after his death it was revised and expanded by his son and later by his son's son.

Although Roget is known principally for this one work, however, he was a talented man. He was involved in trying to improve medical education and became one of the founders of the Medical and Chirurgical Society of London, which later became the Royal Society of Medicine.

In 1815, he invented the log-log slide rule, enabling a person to perform exponential and root calculations simply. This was especially helpful for calculations involving fractional powers and roots. In 1834 he became the first Fullerian Professor of Physiology at the Royal Institution. He was examiner in physiology in the University of London.

On 9 December 1824, Roget presented a paper entitled Explanation of an optical deception in the appearance of the spokes of a wheel when seen through vertical apertures. His explanations had an important impact upon film makers and “ probably influenced the development of the Thaumatrope, the Phenakistiscope and the Zoetrope”.

He wrote numerous papers on physiology and health, among them the fifth Bridgewater Treatise, Animal and Vegetable Physiology considered with reference to Natural Theology (1834), a two-volume work on phrenology (1838), and articles for several editions of Encyclopædia Britannica.

He played an important role in the establishment of the University of London; he was a founder of the Society for the Diffusion of Useful Knowledge and wrote a series of popular manuals for it. He showed remarkable ingenuity in inventing and solving chess problems and designed an inexpensive pocket chessboard.

What produced this inspiration? Roget's life was marked by grief and psychological trauma. His father and his wife died young. His beloved uncle Samuel Romilly committed suicide in Roget's presence and Roget struggled with depression for most of his life. His work on the thesaurus arose partly from an effort to battle depression.

But the observation I have found has a quite different mechanism .......