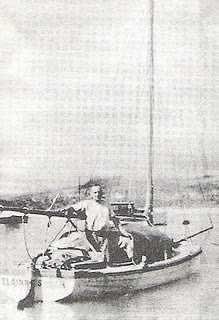 He purchased an open 18 foot [yes you are reading this right!]  sailing regatta yacht added a canvas shelter and strengthened the hull. He  made his own sextant and trailing log. He taught himself navigation, copied old charts he found in the local library and sailed single-handed from Australia to Los Angeles starting around 1931. He did so with a self-created passport. He landed on various Pacific islands en route — spending as long as five months repairing his boat.

He arrived in San Pedro, California, in 1933 and is recorded as the first ever solo crossing of the Pacific Ocean from west to east.

Fred Rebell – Escape to the Sea
My boat voyage was complete. The frail Elaine had brought me more than eight thousand miles across the Pacific.
As I turned in to sleep again that night, I felt like pinching myself to make sure that it was not a dream: that I had in  real truth reached my destination.  A year and a week had passed since I left Sydney. Out of this time I had spent some five months on shore on the islands, each day of which had been a pleasure to me.
Of the seven months that I had actually spent at sea, maybe I was totally becalmed for a dozen days: maybe I weathered about a dozen gales. I still had four months' supply of food left when I reached Los Angeles: two months' supply of water. Boat and gear had cost me all told one hundred and twenty-five dollars; food, spares, and replacements had cost me one hundred dollars for the year. Should I ever go on another such voyage I would choose a decked-in boat, bigger and more comfortable than the Elaine. And yet she had served me faithfully: and I was sorry for the fate that befell her three days later.

The boat Elaine was crushed in a gale whilst in harbour. 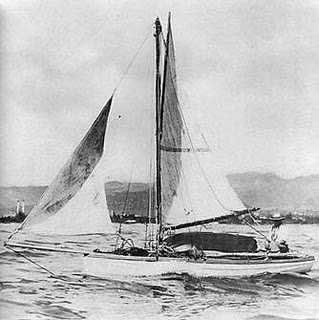 He had a considerable number of spiritual experiences en route – out of body, answers to prayers, communication with his Higher spirit which left him understandably somewhat baffled by conventional religious doctrines.  He attempted to find one that matched what he had experienced, but although eventually deciding on one, he never really found what he  was looking for and came to the conclusion that no existing ‘institutionalised’ religion actually comes close to the truth.

Without legal papers, he was eventually deported to Latvia and returned to live with his parents in Piltene, where he wrote of his adventures in his book Escape to the Sea.

In 1937, Rebell decided to return to Australia and purchased an old 23' fishing vessel for the journey. This boat proved inadequate for the task and was abandoned on the British coast. He eventually joined a family on another small yacht as a crewmember, crossed through the Panama canal and back to Sydney, Australia in 1939.

Back in Australia, he worked as a carpenter and a lay preacher. He took Australian nationality in 1955 and died in 1968.

His book is wonderful reading, well written, easy to read and according to my husband a ripping yarn.

Escape to the Sea" - The Adventures of Fred Rebell WHO SAILED SINGLEHANDED IN AN OPEN BOAT 9,000 MILES ACROSS THE PACIFIC