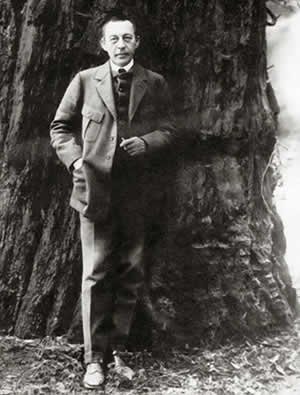 Sergei Vasilievich Rachmaninoff (1873 –1943) was a Russian composer, pianist, and conductor.

He is widely considered one of the finest pianists of his day.  He possessed extremely large hands, with which he could easily manoeuvre through the most complex chordal configurations. His left hand technique was unusually powerful.

As a composer, his work is wide, sweeping and soars, it sweeps you away to other worlds beyond time.

He was one of the last great representatives of Romanticism in Russian classical music. The less flighty in their language say he has “ a pronounced lyricism, expressive breadth, structural ingenuity, and a tonal palette of rich, distinctive orchestral colors.”  He had wings, he could fly. 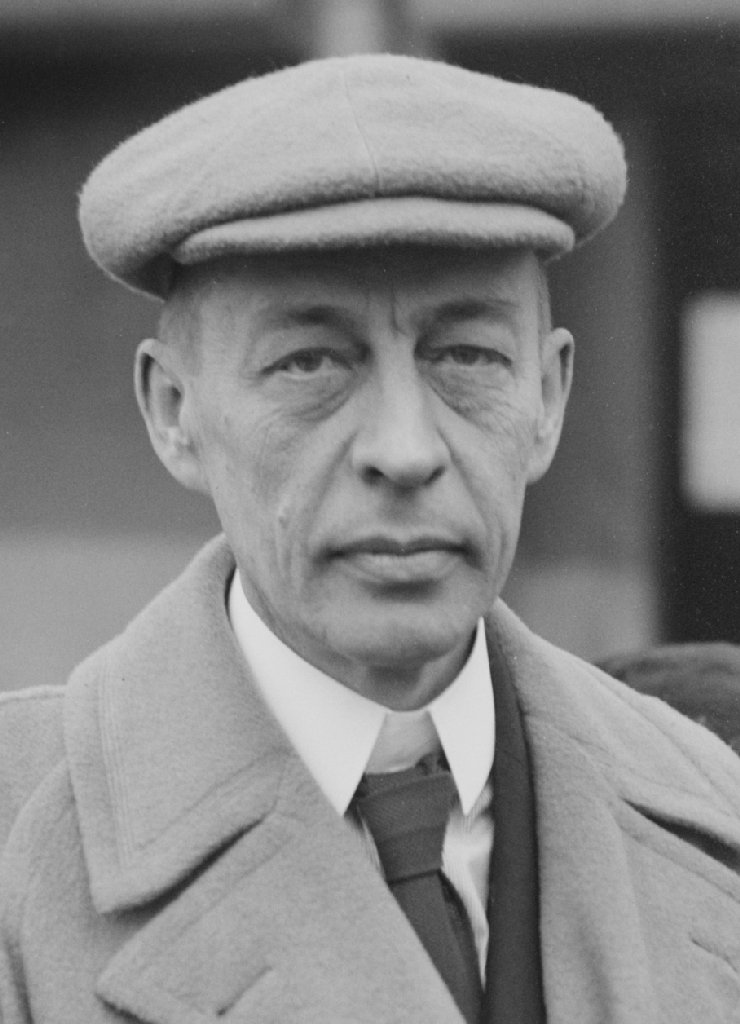 His melodies are often passionate and emotional. His orchestration is subtle and varied, with textures carefully contrasted.  He was very fond of bell sounds:

"It is not enough to say that the church bells of Novgorod, St Petersburg and Moscow influenced Rachmaninov and feature prominently in his music. This much is self-evident. What is extraordinary is the variety of bell sounds and breadth of structural and other functions they fulfil."

He was also fond of Russian Orthodox chants. He uses them most perceptibly in his Vespers, but many of his melodies found their origins in these chants. The opening melody of the First Symphony is derived from chants.

The piano is featured prominently in Rachmaninoff's compositional output. He made a point of using his own skills as a performer, to explore fully the expressive possibilities of the instrument.

Before I describe his works, it is worth saying now that he was quite possibly a sick man.  He, like John Tavener and Paganini, probably had Marfan's syndrome.  He does not seem to have suffered quite as badly as some can with the disease, but “his  slender frame, long limbs, narrow head, prominent ears, and thin nose have suggested Marfan syndrome”. This syndrome might have accounted for the ailments he suffered all his life - back pain, arthritis, eye strain and bruising of the fingertips.  I have kept this diagnosis as the principle mechanism, but there is also the possibility that he had an unusual [and fortuitous] brain configuration caused by perhaps a difficult birth.  To me, a mere woman, he looks like a squashed baby – perhaps they pulled him out by the ears – no sorry I mustn't joke, it isn't funny, but that thought is there. 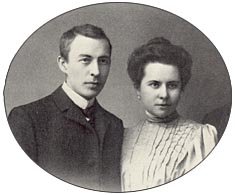 Rachmaninoff with Natalie his fiance

The reason why I personally favour the squashed baby theory is that Rachmaninoff  possessed perfect perception recall. He could hear a piece of music, even a symphony, then play it back the next day, the next year, or a decade after that.  There is the real possibility he had brain damage that favoured his right brain over his left.  He was, for example, extremely emotional as well.  He was overwhelmed with grief when he heard of  the sudden death of Tchaikovsky; and after the brutal criticism he received over his First Symphony (Op. 13, 1896),  he fell into a period of deep depression that lasted three years, during which he wrote almost nothing.   When he became engaged to fellow pianist Natalia Satina whom he had known since childhood, the Russian Orthodox Church and the girl's parents both opposed their marriage and this only deepened Rachmaninoff's depression.  He wasn't just upset he was paralysed with grief. 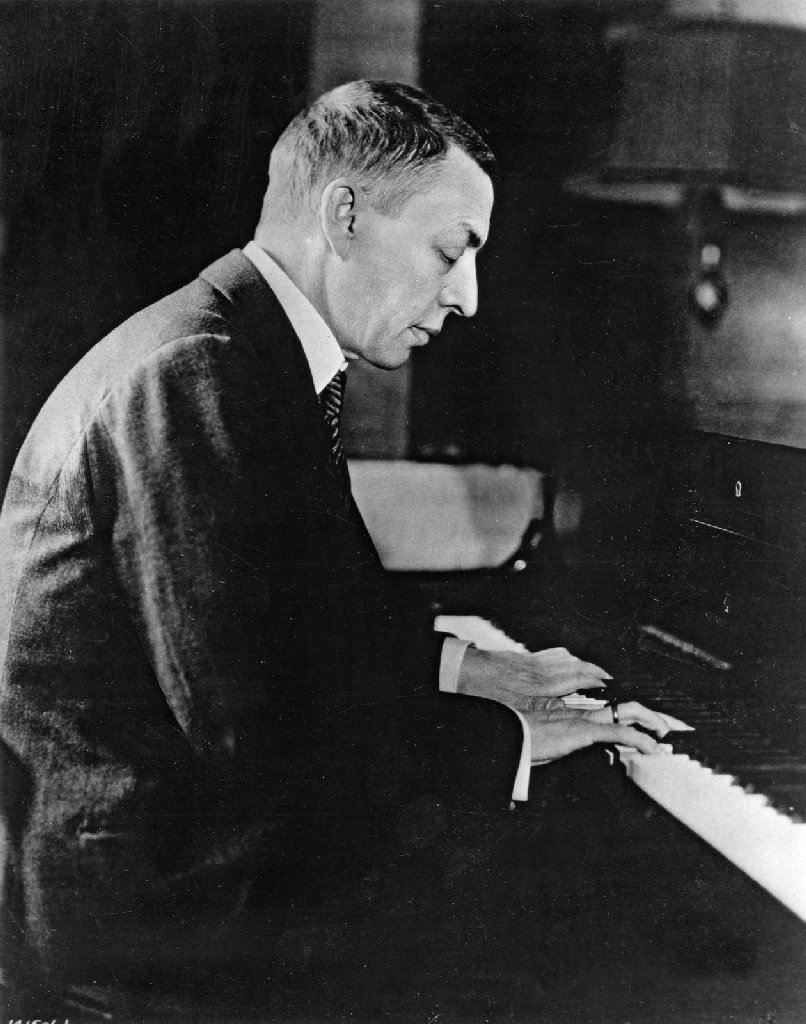 During his time of deepest depression, Rachmaninoff began a course of autosuggestive therapy with psychologist Nikolai Dahl, who was himself an excellent though amateur musician. Rachmaninoff began to recover his confidence and eventually he was able to overcome his writer's block.  It is interesting to compare Rachmaninoff and John Ogden here, who was very similar.  Rachmaninoff received therapy and got better, Ogden received anti-psychotics and got worse.

In 1901 he completed his Piano Concerto No. 2 in C minor, Op. 18 and dedicated it to Dr. Dahl.  This  has since become one of the most popular and frequently played concertos in the repertoire. It is sublime.

Rachmaninoff's spirits were further bolstered when, after three years of engagement, he was finally allowed to marry his beloved fiancée, Natalia. The marriage was a happy one, and he had two daughters. His and Natalia's union lasted until the composer's death.

Rachmaninoff made his first tour of the United States as a pianist in 1909, an event for which he composed the Piano Concerto No. 3 (Op. 30, 1909) .  It is called in some circles a pianist's piece, and it is very special.  The melody of the Third Piano Concerto is not derived from chants as some have intimated; when asked, Rachmaninoff said that "it had written itself". 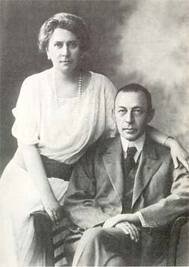 Rachmaninoff with his wife

The 1917 Russian Revolution meant the end of Russia as the composer had known it. He lost his estate, his way of life, and his livelihood. On 22 December 1917, he left Petrograd for Helsinki with his wife and two daughters on an open sled. He spent a year giving concerts in Scandinavia while also labouring to widen his concert repertoire. Near the end of 1918,  he decided the United States might offer a solution to his financial concerns. He departed Kristiania (Oslo) for New York on 1 November 1918.

Once there, Rachmaninoff  accepted the gift of a piano from Steinway before playing 40 concerts in a four-month period.  In 1921, the Rachmaninoffs bought a house in the United States, where they consciously recreated the atmosphere of Ivanovka, entertaining Russian guests, employing Russian servants, and observing old Russian customs.  Rachmaninoff's output as a composer slowed tremendously partly due to his having to perform to support himself and his family, but also to homesickness.

But this changed when he built Villa Senar on Lake Lucerne,  in Switzerland where he spent summers from 1932 to 1939. There, in the comfort of his own villa which reminded him of his old family estate, Rachmaninoff composed the Rhapsody on a Theme of Paganini,  in 1934. He went on to compose his Symphony No. 3 (Op. 44, 1935–36) and the Symphonic Dances (Op. 45, 1940), his last completed work. 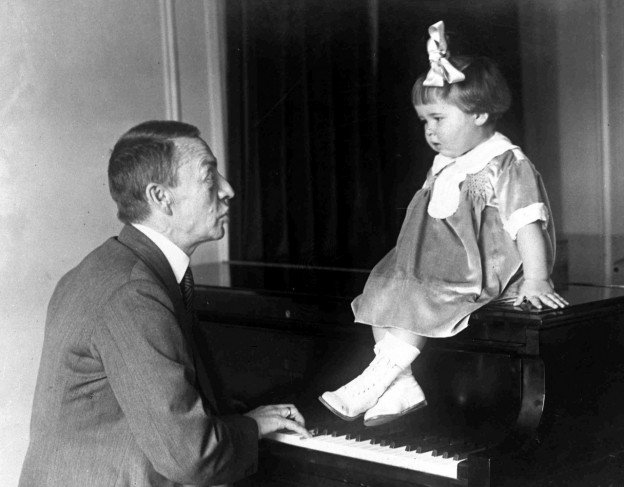 Rachmaninoff wrote five works for piano and orchestra—four concertos plus the Rhapsody on a Theme of Paganini. Of the concertos, the Second and Third are the most popular. He also wrote three symphonies, and his other orchestral works include The Rock (Op. 7), Caprice bohémien (Op. 12), The Isle of the Dead (Op. 29), and the Symphonic Dances (Op. 45).

The Op. 38 songs and Op. 39 Études-Tableaux showed him to be less concerned with pure melody than with colouring. “His  style perfectly matched the texts by symbolist poets”  The Op. 39 Études-Tableaux are among the most demanding pieces he wrote for any medium, both technically and in the sense that the player must see beyond any technical challenges to a considerable array of emotions, then unify all these aspects.

There are also the Six moments musicaux (Op. 16), the Variations on a Theme of Chopin (Op. 22), and the Variations on a Theme of Corelli (Op. 42). Rachmaninoff also composed works for two pianos, four hands, including two Suites (the first subtitled Fantasie-Tableaux), a version of the Symphonic Dances (Op. 45), and an arrangement of the C-sharp minor Prelude, as well as a Russian Rhapsody, and he arranged his First Symphony for piano four-hands.

Rachmaninoff wrote two major a cappella choral works—the Liturgy of St. John Chrysostom and the All-Night Vigil (also known as the Vespers). It was the fifth movement of All-Night Vigil that Rachmaninoff requested to have sung at his funeral. Other choral works include a choral symphony, The Bells, the cantata Spring, the Three Russian Songs and an early Concerto for Choir (a cappella).  He completed three operas, all short: Aleko (1892), The Miserly Knight (1903), and Francesca da Rimini (1904).

His chamber music includes two piano trios, both which are named Trio Elégiaque (the second of which is a memorial tribute to Tchaikovsky), and a Cello Sonata.  He also composed many songs for voice and piano, to texts by A. N. Tolstoy, Pushkin, Goethe, Shelley, Hugo and Chekhov, among others. Among his most popular songs is the wordless Vocalise. 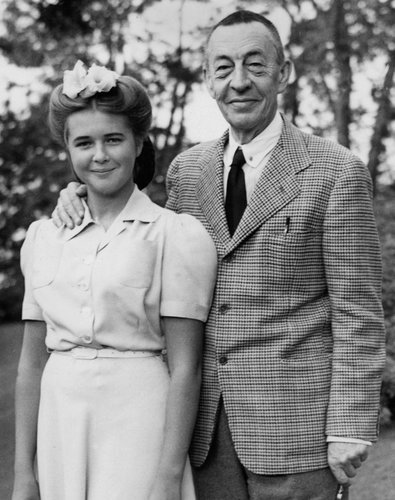 Rachmaninoff fell ill during a concert tour in late 1942 and was subsequently diagnosed with advanced melanoma. His family was informed, but he was not. His last recital, given on 17 February 1943 contained the famous Marche funèbre (Funeral March).  He became so ill after this recital that he had to return to his home in Los Angeles.

Rachmaninoff died of melanoma on 28 March 1943, in Beverly Hills, California, just four days before his 70th birthday. A choir sang his All Night Vigil at his funeral. He had wanted to be buried at the Villa Senar, his estate in Switzerland, but the conditions of World War II made fulfilling this request impossible.