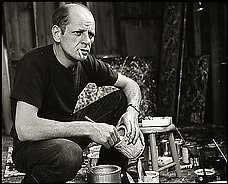 Paul Jackson Pollock (1912 –1956)  was an influential American painter and a major figure in the abstract expressionist movement. He was well known for his uniquely defined style of drip painting.

During his lifetime, Pollock enjoyed considerable fame and notoriety. He was regarded as a mostly reclusive artist and had ‘a volatile personality’.

Perhaps the biggest influence on his painting was that he struggled with alcoholism for most of his life.  He was also a heavy smoker.

Pollock died at the age of 44 in an alcohol-related car accident.