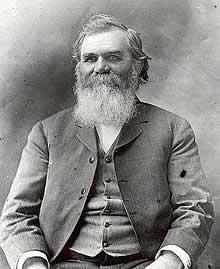 David Palmer (1845 – 1913) was a Canadian who practised and founded chiropractic medicine in the USA.  His great interest was in health philosophies and practises.  But Palmer was also intensely interested in spiritualism.  He is quoted as saying  “The dualistic system — spirit and body — united by intellectual life — the soul — is the basis of this science of biology”.   He also regarded chiropractic as partly spiritual in nature.

Healing with the Chakra Energy system – John Cross
D. D.  Palmer is generally credited with having founded chiropractic.  In 1895 he adjusted the third cervical vertebra of a deaf janitor, thereby restoring his hearing.  Palmer insisted that there was a vital force of energy [which he called] innate.  The innate was the power that kept the autonomic system functioning and expressed itself through the nervous system.  He stated that chiropractic in itself does not cure; the adjustment relieves and removes the cause, then the life force, or innate, transmits impulses without hindrance and effects a cure.