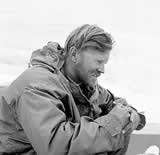 Cuthbert Wilfrid Francis Noyce (1917 –1962) was an English mountaineer. He was a member of the 1953 British Expedition that made the first ascent of Mount Everest.

He was also a very accomplished author, writing not just books, but poems,  scholarly articles, and  climbing guidebooks. One of his most intriguing books was  Scholar Mountaineers, which was a study of twelve writers and thinkers who had an association with mountains; the names should look familiar -  Dante, Petrarch, Rousseau, Ferdinand de Saussure, Goethe, Wordsworth, John Keats, Ruskin, Leslie Stephen, Nietzsche, Pope Pius XI and Robert Falcon Scott.

Noyce was born in 1917 in Simla, the British hill station in India. He was educated at Charterhouse, where he became head boy, and King's College, Cambridge, taking a first in Modern Languages.   In the Second World War he was initially a conscientious objector, joining the Friends Ambulance Unit. However, he later chose to serve as a private in the Welsh Guards, before being commissioned as a second lieutenant in the King's Royal Rifle Corps on 19 July 1941. He was also employed as a code-breaker.

After the war, Noyce became a schoolmaster at his old school, Charterhouse, where he remained for ten years.

In the late 1930s, Noyce was one of a small band of Britons climbing at high standards in the Alps. He was well known for his speed and stamina.  Noyce was a climbing member of the 1953 British Expedition to Mount Everest that made the first ascent of the mountain. Edmund Hillary, meeting Noyce for the first time as the expedition assembled in Nepal, said: "Wilf Noyce was a tough and experienced mountaineer with an impressive record of difficult and dangerous climbs. In many respects I considered Noyce the most competent British climber I had met."

On 21 May, Noyce and the Sherpa Annullu (the younger brother of Da Tensing) were the first members of the expedition to reach Everest's South Col, after what Noyce said was "one of the most enjoyable days' mountaineering I've ever had".

In a passage in South Col, Noyce's book of the expedition published the following year, he gives an account of the scene that greeted him at the Col:

We were on a summit, overlooked in this whole scene only by Lhotse and Everest. And this was the scene long dreamed, long hoped for. To the right and above, the crenellations of Lhotse cut a blue sky fringed with snow cloudlets. To the left, snow mist still held Everest mysteriously. But the eye wandered hungry and fascinated over the plateau between; a space of boulders and bare ice perhaps four hundred yards square, absurdly solid and comforting at first glance in contrast with the sweeping ridges around, or the blank mist that masked the Tibetan hills beyond. But across it a noisy little wind moaned its warning that the South Col, goal of so many days' ambition, was not comfortable at all. And in among the glinting ice and dirty grey boulders there lay some yellow tatters – all that remained of the Swiss expedition of last year.

Hunt noted that "Noyce and Wylie were the only two members of the climbing party to reach the South Col without oxygen."   As well as naming his book of the expedition South Col, Noyce also wrote a poem called 'South Col'.

On 20 May 1957, together with A. D. M. Cox, Noyce made the effective first ascent of Machapuchare (6,993 m) in the Annapurna Himal, reaching to within 50 m of the summit before turning back at that point out of respect for local religious beliefs.

Noyce died in a mountaineering accident together with the 23-year-old Scot Robin Smith in 1962, after a successful ascent of Mount Garmo (6,595 m), in the Pamirs. On the descent, either Smith or Noyce slipped on a layer of soft snow over ice, pulling the other, and they both fell 4,000 feet.