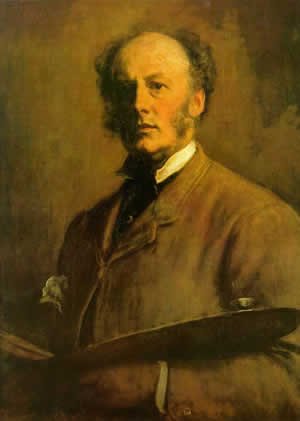 Millais was born in Southampton, England in 1829, of a prominent Jersey-based family.  His 'prodigious artistic talent' won him a place at the Royal Academy schools at the unprecedented age of eleven. While there, he met William Holman Hunt and Dante Gabriel Rossetti with whom he formed the Pre-Raphaelite Brotherhood in 1848.

If the self portrait to the left is an indication, done as all self portraits were at that time with the aid of a mirror, he was left handed.

Much of Millais's early work is inspired.  It is both unusual and  highly detailed with a vibrant luminosity and lovely use of colour.  Millais's Christ In The House Of His Parents (1850) was highly controversial because of its realistic portrayal of a 'working class' [not my words] Holy Family working in a carpentry workshop. He depicted lost love, unrequited love and religious conflict.  Anguish and grief.  A Huguenot (1852), for example, depicts a young couple about to be separated because of religious conflict. He repeated this theme in many later works almost as if he had personal experience of some similar event. All his early works were painted with great attention to detail, often concentrating on the beauty and complexity of the natural world. His early work also includes Ophelia (1852) – another figure of tragedy.

So all his early work was inspired by themes of loss and grief, frustration and unrequited love and the possible source of this inspiration was his love affair with John Ruskin's wife.

John Ruskin had been an ardent promoter of the Pre-Raphaelites and Millais's friendship with Ruskin introduced him very early on to his wife Effie. Soon after they met , she modelled for his painting The Order of Release (exhibited in 1853). And as so often happens with the painter and his model they fell in love. A great deal of wordage has been written about the nature of Effie's marriage to Ruskin and the unconsummated nature of their relationship.  Whatever the truth is we know that in 1855,  Effie's marriage to Ruskin had been annulled and she and John Millais married.

And from that point on his whole style of painting changed.

He began to paint in a broader style - condemned by Ruskin as "a catastrophe".  William Morris accused him of "selling out" to achieve popularity and wealth. His paintings are still technically brilliant.  They include such works as  The Two Princes Edward and Richard in the Tower (1878), The Northwest Passage (1874) and the Boyhood of Raleigh (1871). Millais also achieved great popularity with his paintings of children, notably Bubbles (1886) and Cherry Ripe.  These are cheerful, happy pictures, they lift your heart and make you smile, but somehow they do not inspire. 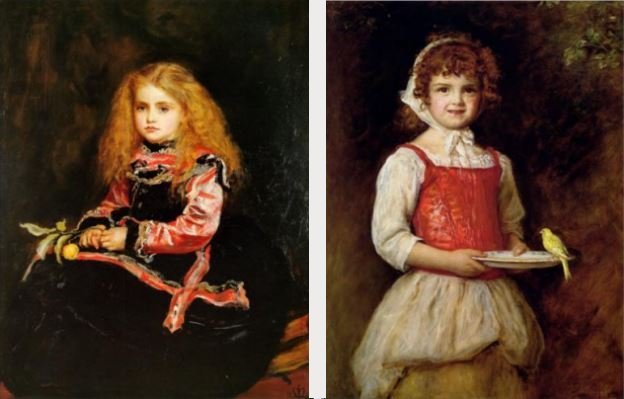 But there was still a dark side to Millais.  He had a fascination with wild and bleak locations  evident in his many landscape paintings.  Chill October (1870) , Autumn Leaves (Manchester Art Gallery) and The Vale Of Rest (Tate Britain), are all autumnal or early winter in season and show bleak, dank, water fringed bog or moor, loch and riverside.  There is no symbolism nor human activity - these are places of depression – the loss of the spiritual in his life.

Millais was elected as an associate member of the Royal Academy of Arts in 1853, and was soon elected as a full member of the Academy, in which he was a prominent and active participant. He was created a Baronet in 1885, the first artist to be honoured with a hereditary title. It is not always a mark of a great artist to be recognised by the establishment, it brought Millais great wealth, but I'm not sure what it brought him in his heart.

He and Effie eventually had eight children: Everett, born in 1856; George, born in 1857; Effie, born in 1858; Mary, born in 1860; Alice, born in 1862; Geoffroy, born in 1863; John in 1865; and Sophie in 1868. Their youngest son, John Guille Millais, became a notable naturalist and wildlife artist. Millais's paintings of children show that he loved them.  He was probably a very happy man.  But happiness in the world of art does not always produce great painting, not does it produce great poetry.

After the death of Lord Leighton in 1896, Millais was elected President of the Royal Academy, but he died later in the same year from throat cancer. He was buried in St Paul's Cathedral.