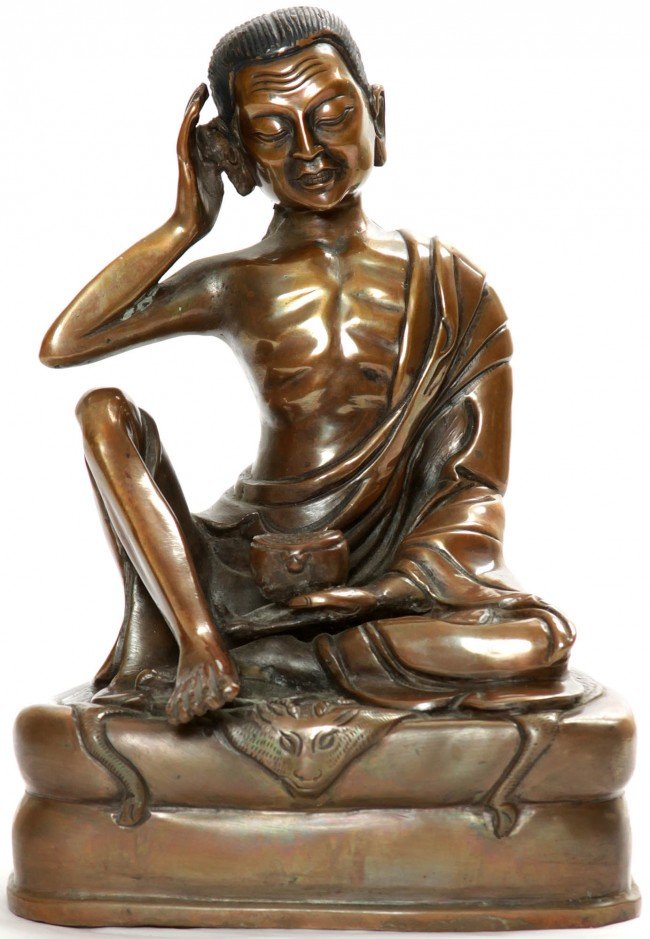 Jetsun Milarepa   (c. 1052—c. 1135 AD) is one of Tibet's most famous characters.  He was a student of Marpa Lotsawa, and theoretically a major figure in the history of the Kagyu (Bka'-brgyud) school of Tibetan Buddhism.  But having said this most of his fame rests on the bizarre and extreme ascetic practises he adopted, none of which were advocated by the Buddha himself, nor are Buddhist practise.

He was born in the village of Kya Ngatsa in western Tibet to a prosperous family. When his father died, Milarepa's uncle and aunt took all of the family's wealth. At his mother's request, Milarepa left home and studied sorcery [black magic]. And here we have the essence of Milarepa because he was essentially a shaman and a fairly unpleasant one at that.  While his aunt and uncle were having a party to celebrate the impending marriage of their son, he took his revenge by summoning a giant hail storm to demolish their house, killing 35 people, although the uncle and aunt are supposed to have survived. The villagers were angry and set off to look for Milarepa, but his mother got word  to him, and he sent a hailstorm to destroy their crops.

Milarepa later lamented his evil ways in his older years in conversation with Rechungpa: "In my youth I committed black deeds”.  I think he deluded himself that his later conversion somehow “destroyed the root of karmic action”.  But once done, it’s done and I think he realised this when he said “To say more than this would only cause weeping and laughter. What good would it do to tell you? I am an old man. Leave me in peace."

Having said all this, through his training in magic he was able to have out of body experiences – or at least claimed he could. 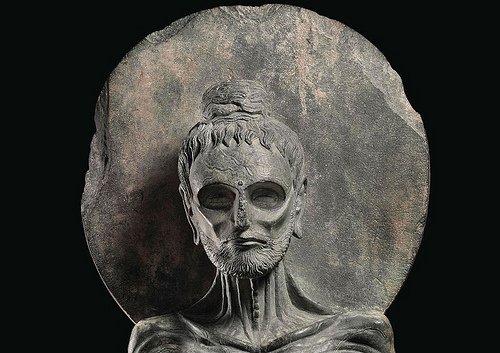 According to the book Magic and Mystery in Tibet by French explorer Alexandra David-Néel, Milarepa boasted of having “crossed in a few days, a distance which, before his training in black magic, had taken him more than a month”.

David-Néel comments “that at the house of the lama who taught him black magic there lived a trapa [monk] who was fleeter than a horse” using the same skill.

So it was the shamanic training that gave him the experiences as opposed to his later Buddhist training.

Knowing that his revenge was wrong, Milarepa set out to find a lama and was led to Marpa the translator. Marpa was understandably none too happy about taking on Milarepa and said he would teach Milarepa if he would build and then demolish three towers in turn. Astonishingly Milarepa did this.  Milarepa was asked to build one final nine storey tower by Marpa at Lhodrag and this eleventh century tower still stands.  This must have thrown Marpa, who presumably assumed someone with Milarepa’s background would give up fairly early on, and Marpa then simply refused to teach Milarepa.

But Milarepa went to Marpa's wife, who took pity on him. She forged a letter of introduction to another teacher, Lama Ngogdun Chudor, under whose tutelage he practised meditation. However when he was making no progress, he confessed the forgery and Ngogdun Chudor said that it was vain to hope for spiritual growth without the guru Marpa's approval.

Milarepa returned to Marpa and from here we have claims about his progress and various stages of enlightenment which do not entirely ring true.  One of the reasons they do not ring true is that he retired to a cave and started to starve himself – the sign of a man desperate for spiritual experience – not of one who has attained enlightenment.

There, he subsisted on nettle tea, leading his skin to turn green.  Here he managed to get hallucinations. 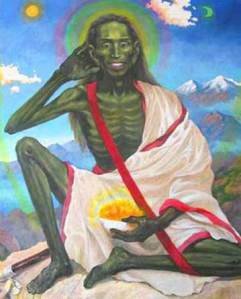 The Life of Milarepa – Lobzang Jivaka
Now more convinced she arrived at the mouth of my cave with some light beer in one hand and a bag of flour in the other, but the sight of me frightened her.
My bony skeleton stood out a mass of ridges and points, my eyes were sunk far into their sockets, my skin was still of greenish hue, my muscles had atrophied almost completely, the hair on my head stuck up straight, and my limbs seemed as frail as matchsticks.  Naturally therefore, I gave her a dreadful shock and she thought at first I was some sort of ghost.  But then she remembered she had heard I was dying of starvation and mustered up the courage to approach me and ask me
‘Are you a man or a ghost?’
‘I am Mila Thopaga’ I replied and at the sound of my voice she flung herself at me and embraced me, calling me ‘Brother!’……
[I told her] I was content with whatever Nature had to offer just so long as it led to my gaining transcendent knowledge which would mean that in my next birth I would be born into buddhahood…
‘If this were true’ Peta said ‘it would be wonderful, but I just can’t believe it.  If it were, surely all devotees would practise as hard as you do, but I have never seen, in all my wanderings, anyone who is as ascetic as yourself’.
She then gave me food and drink she had brought and departed.
How I enjoyed it!
With much greater vigour I was able to plunge back into my meditations that night.

After his death, he acquired quite a following.