The Maya is a Mesoamerican civilization, noted for the only known fully developed written language of the pre-Columbian Americas, as well as for its art, architecture, and mathematical and astronomical systems. Initially established during the Pre-Classic period (c. 2000 BC to AD 250), many Maya cities reached their highest state of development during the Classic period (c. AD 250 to 900), and continued throughout the Post-Classic period until the arrival of the Spanish. 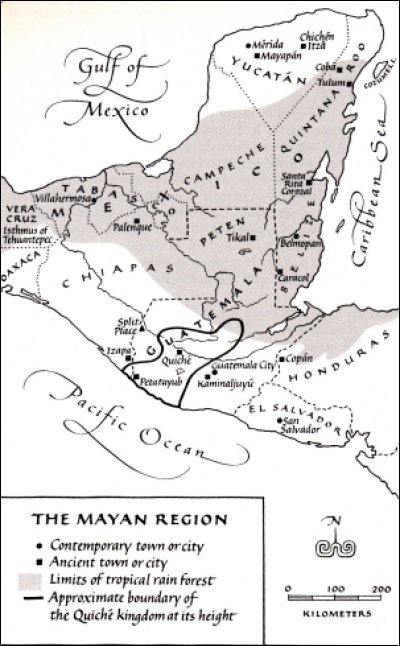 A map showing the approximate range of the civilisation is shown here, however, Maya influence can be detected in Honduras, Belize, Guatemala, and western El Salvador to as far away as central Mexico, more than 1,000 km (620 miles) from the central Maya area. 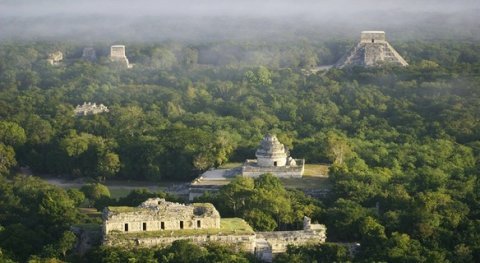 The Maya peoples survived the arrival of the Spanish conquistadores and sixteenth-century Spanish colonization of the Americas, however, their culture did not. Today, the Maya and their descendants form sizable populations throughout the Maya area; and they attempt to preserve their traditions and beliefs in the face of the inevitable erosion resulting from schooling and religious indoctrination.  They have one thing, however, which helps them.  There are an estimated six million Mayans today and millions of them speak Mayan languages.

from the Introduction to Popol Vuh - Professor Dennis Tedlock 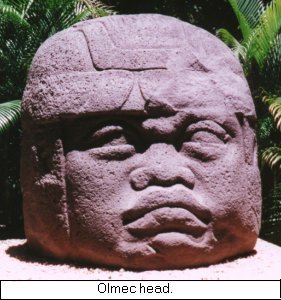 The roots of Mayan civilization may lie in the prior civilization of the Olmecs, which was flowering on the Gulf coastal plain of Veracruz and Tabasco by about 1200 B.C. A more immediate antecedent is the Izapan culture, which ran along the western and southern edges of the Mayan world and reached inside that world at the highland site of Kaminaljuyu, on the west side of what is now Guatemala City. …This emergence took place during the period they call the Early Classic (AD 300-600), and it was centred in the lowland rain forest that separates the mountain pine forest of Chiapas and Guatemala from the low and thorny scrub forest of northern Yucatan. Swamps were drained and trees were cleared to make way for intensive cultivation.
Hieroglyphic texts in great quantity were sculpted in stone and stucco, painted on pottery and plaster, and inked on long strips of paper that were folded like screens to make books.
During the Early Classic period lords from Teotihuacan, the great city of the central Mexican highlands, took control of Kaminaljuyu and established political and trade relationships with such lowland Mayan cities as Tikal.
The Late Classic period (AD. 600-900) opened with the collapse of Teotihuacan and its outpost at Kaminaljuyu, and it saw the establishment of a Mayan presence at Xochicalco and Cacaxtla in central Mexico. In the lowland rain forest, such Mayan cities as Palenque, Tikal, and Caracol rose to their greatest glory, and Chichen ltza was founded in the north. The southernmost city was Copan, located in the foothills of the highlands rather than in the rain forest. Its rise to prominence coincided with the decline of Kaminaljuyu, and it has recently been revealed that its rulers claimed descent from the royal line of Teotihuacan.
As the Late Classic period drew to a close, the Mayan communities that had carved out a place for themselves in the rain forest, along with Copan, were caught in a deepening vortex of overpopulation, environmental degradation, malnutrition, and warfare. At the same time, they were being bypassed by a developing sea-trade network that reached all the way around Yucatan from Tabasco to Honduras. By AD. 900, the political and economic strength of the larger city-states had broken under the strain. From that time until the European invasion, the remaining inhabitants of the rain forest lived in smaller towns along the shores of lakes, rivers, and estuaries. The greater part of the Maya population was now divided between two areas that had been on the periphery during Classic times, one in northern Yucatan and the other in the southern highlands.
The Late Postclassic (from AD. 1200 to the European invasion) saw the rise of the kingdom of Mayapan in the north and that of Quiche in the south, both of them tribute-collecting conquest states that followed Chichen ltza in giving mythic prominence to a divine king named Plumed Serpent. At the core of each of these states was an alliance of noble lineages that was largely Mayan but included Mexicans whose native language was Nahua. The heads of these lineages, whatever their places of origin, resided in the capital, surrounded by fortifications.
Carved inscriptions were no longer a major feature of Mayan monuments and buildings during the Postclassic period, but writing and painting flourished on plastered walls and the pages of books. This is especially evident for sites located on or near the east coast of Yucatan, from the island of Cozumel and the mainland sites of Coba, Tancah, and Tulum in the north down to Santa Rita Corozal in Belize. The illustrations in three of the surviving Mayan books, the ones now known as the Madrid, Paris, and Dresden codices, have strong ties in both style and content to the wall art of this region. 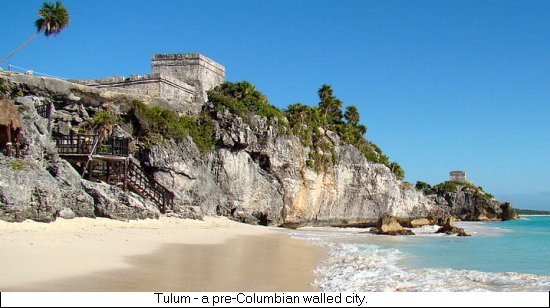 Cortes and his men saw many books when they landed on Cozumel, and there is good evidence that the loot they took away with them included the Dresden Codex. The writing in Post-classic books, as compared with Classic writing, shows an increased reliance on phonetic signs, including the use of distinctly Mayan signs to spell out words borrowed from Nahua.

The Spanish conquest of the Maya proved to be a very long campaign lasting from around 1551–1697. The day Hernán Cortés landed ashore at present day Veracruz, April 22, 1519, marks the beginning of 300 years of Spanish hegemony over the region. The last Maya states, the Itza polity of Tayasal and the Ko'woj city of Zacpeten, were continuously occupied and remained independent of the Spanish until late in the 17th century. They were finally subdued by the Spanish in 1697.  In 1535, the Vice-royalty of New Spain was established by Charles V.

Unlike the Aztec and Inca Empires, there was no single Maya political centre that, once overthrown, would hasten the end of collective resistance from the indigenous peoples. Instead, the conquistador forces needed to subdue the numerous independent Maya polities almost one by one, many of which kept up a fierce resistance. Unlike the Aztec, the Maya knew how to fight.  Whereas the Aztec had been used to subjugation by diplomacy and conversion, the Maya were a larger and more organised military nation.  It needs to be remembered that England was also threatened by the Spanish at this time and managed to fight back during the Armada.  If we had lost, no doubt we would have gone the same way as the Maya, so I have some sympathy with them.  The Netherlands and low countries were ruled by Spain at this time and suffered in much the same way as the Maya.  From 1515 to 1523, Charles's government in the Netherlands brutally suppressed a rebellion of Frisian peasants and Spanish controlled soldiers ransacked and pillaged wide areas of the country including The Hague.

The motivation in all these conquests was the lust for power, greed and religious fanaticism fuelled by the Catholic Church, however, the Maya lands themselves were poor in gold or silver and this became another factor in forestalling Spanish designs of conquest, as they instead were initially attracted to the reports of greater riches in central Mexico or Peru.

This did not stop the Spanish Church, however, and government and church  officials destroyed Maya texts and with them the knowledge of Maya writing, but by chance three of the pre-Columbian books dated to the post classic period have been preserved. These are known as the Madrid Codex, The Dresden Codex and the Paris Codex.

from the Introduction to Popol Vuh - Professor Dennis Tedlock

The Spanish invasion of the Mayan world began during the sixteenth century, and so did a long history of Mayan resistance that continues right down to the broadcast news of our own day. Backed by means of persuasion that included gunpowder, instruments of torture, and the threat of eternal damnation, the invaders established a monopoly on virtually all major forms of visible public expression, whether in drama, architecture, sculpture, painting, or writing. In the highlands, when they realized that textile designs carried complex messages, they even attempted to ban the wearing of Mayan styles of clothing. Hundreds of hieroglyphic books were burned by missionaries, but they were still in use as late as the end of the seventeenth century in Yucatan and the beginning of the eighteenth in highland Guatemala. Only four books are known to have survived to the present day, including the three that found their way to Madrid, Paris, and Dresden long ago. A fourth was recovered in 1966 from looters who had found it in a dry cave in Chiapas.
But the survival of ancient Mayan literature was not dependent on the survival of its outward forms. Just as Mayan peoples learned to use the symbolism of Christian saints as masks for ancient gods, so they learned to use the Roman alphabet as a mask for ancient texts. There was no little justice in the fact that it was the missionaries themselves, the burners of the ancient books, who first introduced Mayans to alphabetic writing.
What they wanted their pupils to write was translations of Christian prayers, sermons, and catechisms into Mayan languages, but very little time passed before some Mayans found political and religious applications for alphabetic writing that suited their own purposes. These independent writers have left a literary legacy that is both more extensive than the surviving hieroglyphic corpus and more open to understanding.
Their most notable works, created as alphabetic substitutes for hieroglyphic books, are the Chilam Balam or "Jaguar Translator" books of Yucatan and the Popol Vuh of Guatemala. 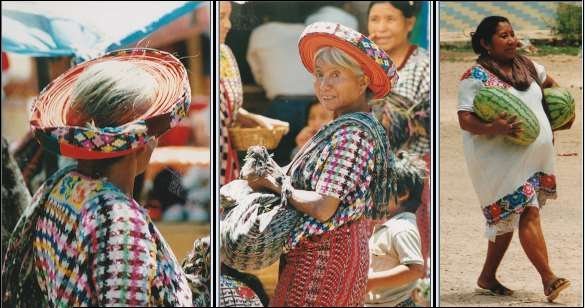 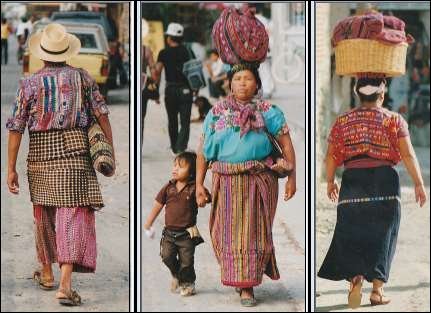 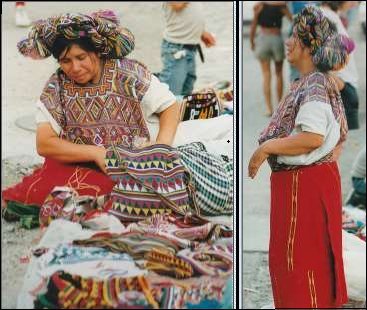 I have some observations taken from the various texts that have survived, but I thought it might be interesting to look at the architecture and decode the symbolism of their buildings, as here we have a wonderful summary of everything known of the spiritual world.  The Mayan cities and temples were a sacred geography, they attempted to capture in their landscape and buildings all they knew of the spiritual world they visited in visions and out of body experiences.

Popol Vuh – translated by Dennis Tedlock.  The Popol Vuh is the Mayan equivalent of Beowulf or the Poetic Edda.  It has the story of Creation as well as chapters on the creation of humans, which describe three failed attempts at making humans, one of which is very close to the truth as science now believes it, as it has monkeys as the end result.
But the vast majority of the account describes the exploits of the Mayan shamanic lords or kings in the underworld and other realms of the spiritual.  It includes virgin births, resurrection and numerous other spiritual concepts such as beheading, being pierced with knives, magic flight and so on, which also leads one to suspect it was devised as a ripping yarn to help people remember symbols – much as the Hypnerotomachia Poliphili, Christian Rosenkreuntz and Alice in Wonderland are.  There are also some literal descriptions which show that like all small kingdoms of the time, the rulers preserved their power over their subjects through shamanic exploits, but were also extremely ruthless in attempting to extend their kingdoms by actual physical force.