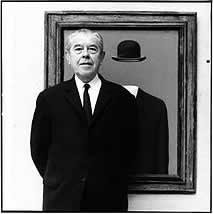 René François Ghislain Magritte (1898 – 1967) was a Belgian surrealist artist. His paintings are little understood even today.  They are so full of symbolic meaning there is not an object in them that does not mean something and it is all spiritual symbolism.  The art may be surreal, the style is pure symbolism.  Furthermore he took great pleasure in providing quotable quotes that made it appear that his paintings were just interesting art, mystery for mystery's sake....

"If the spectator finds that my paintings are a kind of defiance of 'common sense', he realises something obvious. I want nevertheless to add that for me the world is a defiance of common sense."

It is fairly clear he was not interested in explaining his art to those who hadn't got the inclination to find out more about the 'reality' he aimed to paint.  For example, René Magritte described his paintings as:

"visible images which conceal nothing; they evoke mystery and, indeed, when one sees one of my pictures, one asks oneself this simple question, 'What does that mean?' It does not mean anything, because mystery means nothing either, it is unknowable."

Magritte was born in Lessines, in the province of Hainaut, the eldest son of Léopold Magritte.  On 12 March 1912, his mother committed suicide by drowning herself in the River Sambre. This was not her first attempt at taking her own life; she had made many over a number of years, driving her husband Léopold to lock her in her bedroom. One day she escaped, and was missing for days. She was later discovered a mile or so down the nearby river, dead.

Psychologists and psychotherapists in profusion have of course homed in on this as a defining time in his life and suggested that his art might be more properly called escapism.  But although it was a defining moment, the escape was to another more spiritual plane, it wasn't escapism per se.  As he said

“We must not fear daylight just because it almost always illuminates a miserable world.”

Magritte was not a depressive, in fact you can detect in all his paintings a strong sense of the comic and of course surreal, but he liked jokes and fun.  Even during the misery of the second world war he adopted a colourful, pastel toy like style, as a reaction to the grimness of living in German-occupied Belgium.  In 1946,  he joined several other Belgian artists in signing the manifesto Surrealism in Full Sunlight. 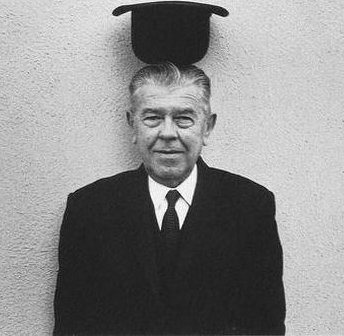 His whole life was a sort of see saw between periods when he had to undertake mundane jobs in order to support himself and his wife, and periods when he managed to secure a patron or sponsor and thus paint what he wanted to paint.  From 1922–1923, for example, he worked as a draughtsman in a wallpaper factory, and was a poster and advertisement designer.

But in 1926, he secured  a contract with Galerie le Centaure in Brussels, which made it possible for him to paint full-time. In 1926, Magritte produced his first surreal painting, The Lost Jockey (Le jockey perdu), and held his first exhibition in Brussels in 1927. Critics heaped abuse on the exhibition. Depressed by the failure, he moved to Paris where he became  involved in the surrealist group.  Galerie la Centaure closed at the end of 1929, ending Magritte's contract income. Magritte returned to Brussels in 1930 and resumed working in advertising.

The British surrealist patron Edward James allowed Magritte to stay rent free in his London home and paint. James is featured in two of Magritte's works, Le Principe du Plaisir (The Pleasure Principle) and La Reproduction Interdite, a painting also known as Not to be Reproduced.  Then came the war and as Magritte stayed in Belgium, this arrangement came to an end.

At the end of the war, Magritte supported himself through the production of fake Picassos, Braques and Chiricos—a fraudulent repertoire he was later to expand into the printing of forged banknotes during the lean postwar period. This venture was undertaken with his brother Paul Magritte and fellow Surrealist and 'surrogate son' Marcel Mariën, to whom had fallen the task of selling the forgeries. At the end of 1948, he returned to the style and themes of his prewar surrealistic art.

Despite the criticism, despite the lack of understanding, he did achieve some success during his life.  His work was exhibited in the United States in New York in 1936 , for example, but many of the paintings which are now in the museum dedicated to his work in Brussels came from his wife's estate and that of one collector.  So what success he had was modest in his lifetime, as is often the case with those out front.

Magritte died of pancreatic cancer on 15 August 1967 in his own bed, aged 68.  As is always the way, once the poor man was dying,  interest in Magritte's work rose considerably.  Since his death his paintings have been valued in the millions.

His escape to the spiritual world appears to have been achieved via relaxation techniques and a form of lucid dreaming.  I have included one of his techniques in this description.

In the example paintings I have chosen, I have listed all the symbols so you can find out what the symbolism in the pictures mean.  But there is also a large section on Symbols on the site you can refer to to try to unravel any of his other paintings.  All the Surrealists and Symbolists used the same symbols so it is a universal language.  Dali used the same ones.

In understanding Surrealism it may be helpful to realise it is Symbolism but with no attempt to make a coherent picture from the symbols.  In effect painters who are classified as Symbolists painted what appeared to be 'normal' scenes.  The Surrealists simply said, why bother, let's create paintings with just symbols.

The Rene Magritte Museum in Brussels is well worth a visit, but you can visit the site by clicking this LINK.