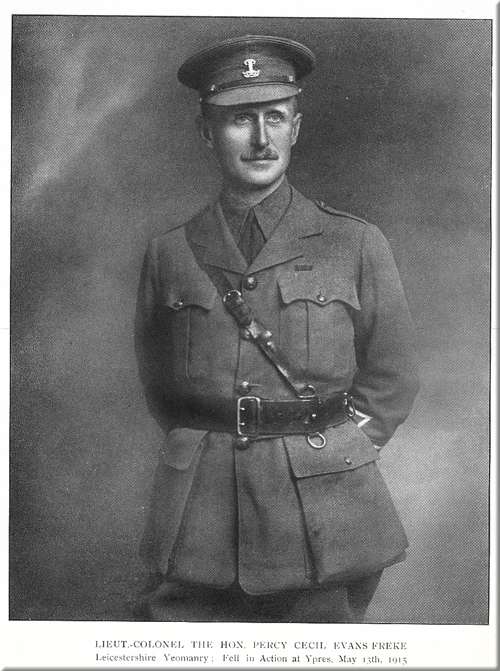 Baron Carbery, of Carbery in the County of Cork, is a title in the Peerage of Ireland.  One of the Carberys had a spiritual experience related to a horse named Kitty, of whom he was very fond, and his wife –Lady Carbery, Lord Carbery's wife, sent the following account from Freke Castle, Cork County, dated July 23, 1904 to the Journal of the Society for Psychical Research.  The experience took place “On a hot Sunday afternoon, in summer 1900, after lunch”.

The Lord Carberry being referred to in the account was not John Evans Carberry, 10th Baron Carbery (1892–1970), but Lieut.-Colonel the Hon. Percy Cecil EVANS-FREKE, born 19 May 1871.  He was a prominent hunting man in the district, being secretary of the Cottesmore Hunt.

Lieut.-Colonel the Hon. Percy Cecil, was the second son of William, 8th Baron Carbery and Lady Victoria Cecil. He obtained a Commission in the Leicestershire Yeomanry in December 1895, was promoted lieutenant March 1899, captain May 1903, major February, 1905, and succeeded Lieut-Colonel T. E. HARRISON in command of the regiment in 1913.  The Lieut.-Col. died Thursday, 13 May 1915, Frezenburg, France, shot by a sniper.  The following account is that of a reliable eye-witness: ---

"I was in the fight in which Col. FREKE was killed, in fact, I had been in personal touch with him up to five minutes before I saw him fall. Things were rather hot, and I happened to be one of a small party, who, with Col. FREKE, had become detached from the main portion of the squadron who were holding a length of trench. We were in touch by signal, however, and a message came across that Major RICARDO was hit. Thereupon Col. FREKE walked out across the open to join the party in the trench about eighty yards away. He had covered the greater part of the distance when we saw he had been struck in the arm. He still went on to within five or six yards of the trench when he fell."

He had been struck again. His soldier servant, who was in the trench, picked him up, but he was dead. His body lies buried in the cemetery close to Breelin Cross-roads, near Ypres. 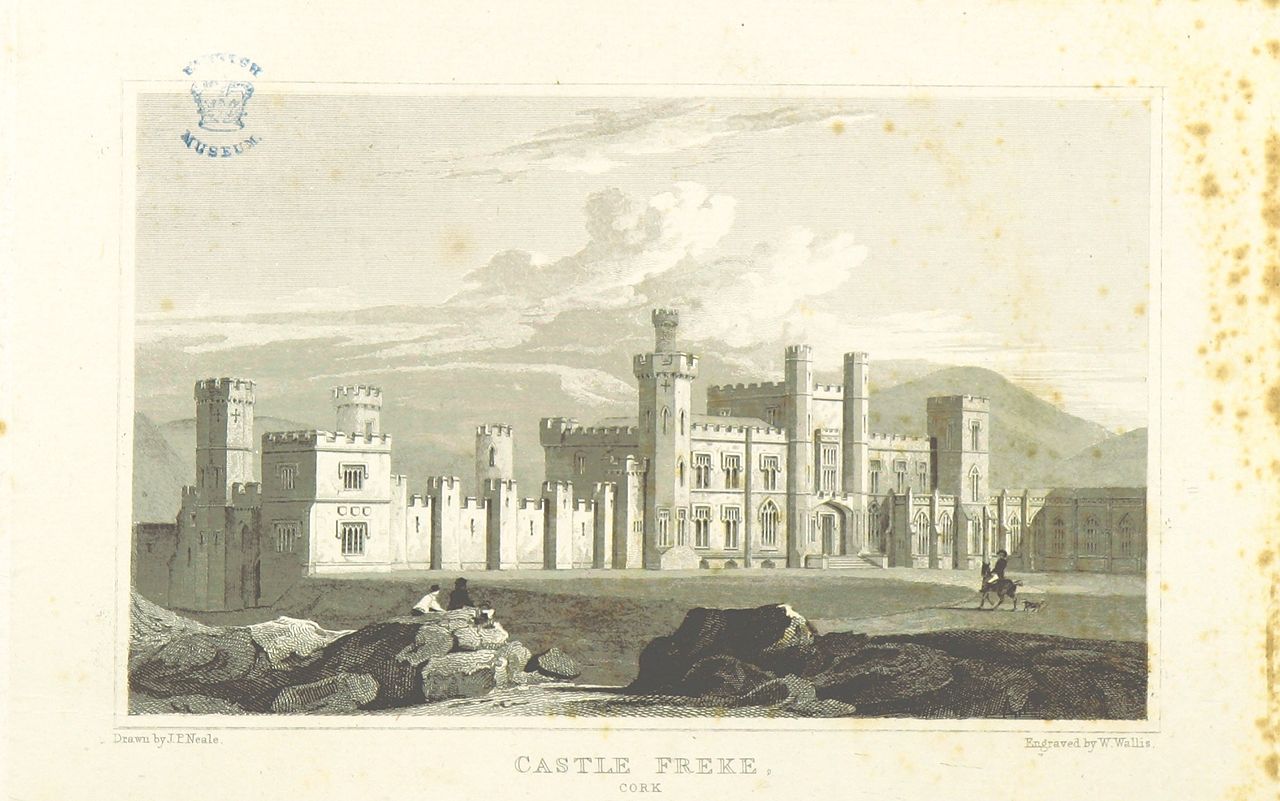 The title was created in 1715 for George Evans, ‘with remainder to the heirs male of his father and namesake George Evans’, a supporter of William and Mary during the ‘Glorious Revolution’, who had earlier declined the offer of a peerage. He was then succeeded by a number of further Baron Carberrys, all of whom were eldest sons and inherited the title.  On the death of the fifth Baron, the line of the eldest son of the first Baron failed. He was succeeded by his first cousin once removed, the sixth Baron, who had previously succeeded his father as second Baronet, of Castle Freke.  Above:  Castle Freke in 1818 (image extracted from page 270 of volume 6 of Views of the Seats of Noblemen and Gentlemen in England, Wales, Scotland and Ireland. L.P, by John Preston Neale.)

The Baronetcy, of Castle Freke in the County of Cork, was created in the Baronetage of Ireland in 1768 for John Evans-Freke, son of Grace daughter and heiress of Sir Ralph Freke, 1st Baronet of West Bilney Norfolk and the Hon. John Evans, younger son of the first Baron Carbery. On his death the title passed to his son, the second Baronet. In 1807 he succeeded his first cousin once removed as sixth Baron Carbery. The titles have remained united since.