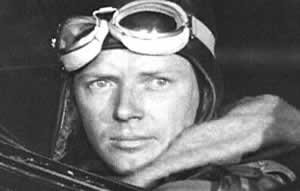 As a 25-year-old U.S. Air Mail pilot, Lindbergh emerged suddenly from virtual obscurity to instantaneous world fame as the result of his Orteig Prize-winning solo non-stop flight on May 20–21, 1927, made from Roosevelt Field on New York's Long Island to Le Bourget Field in Paris, France, a distance of nearly 3,600 miles (5,800 km), in the single-seat, single-engine purpose built Ryan monoplane Spirit of St. Louis. 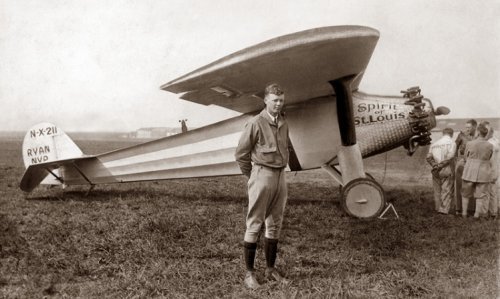 In the late 1920s and early 1930s, Lindbergh used his fame to promote the development of both commercial aviation and Air Mail services in the United States and the Americas.

Charles was the only child of Swedish immigrants.   Both he and his father were pacifists.  He appears to have benefited greatly by avoiding any involvement with the education system, he “attended over a dozen schools during his childhood and teenage years but none for more than a full year” and “dropped out of college education in the middle of his sophomore year”  to begin flight training.

Lindbergh's first solo flight was in May 1923 .  After just half an hour of dual time with a pilot who was visiting the field to pick up another surplus JN-4, Lindbergh flew solo for the first time in the Jenny that he had just purchased for $500. After spending another week or so at the field to "practice" (thereby acquiring five hours of "pilot in command" time), Lindbergh took off from Americus for Montgomery, Alabama, on his first solo cross country flight, and went on to spend much of the rest of 1923 engaged in virtually nonstop barnstorming under the name of "Daredevil Lindbergh".

On March 19, 1924, he began a year of military flight training with the United States Army Air Service.  Late in his training Lindbergh experienced his most serious flying accident on March 5, 1925, eight days before graduation. He was involved in a midair collision with another Army S.E.5 while practicing aerial combat maneuvers and was forced to bail out. Only 18 of the 104 cadets who started flight training remained when Lindbergh graduated first overall in his class in March 1925.

With the Army not then in need of active duty pilots, however, following graduation Lindbergh returned to civilian aviation as a barnstormer and flight instructor.

In October 1925, Lindbergh was hired by the Robertson Aircraft Corporation in St. Louis (where he had been working as a flight instructor) to serve as chief pilot for the newly designated 278-mile (447 km) Contract Air Mail Route between St. Louis and Chicago.

Twice during the 10 months that he flew, Lindbergh temporarily lost "custody and control" of mails that he was transporting when he was forced to bail out of his mail plane owing to bad weather, equipment problems, and/or fuel exhaustion.

During the build up to his pursuit of the Orteig Prize and in preparation for his flight to Paris, Lindbergh found time to become a Freemason, the group to which he would remain a lifelong active member in various lodge bodies.

Six well known aviators had already lost their lives in pursuit of the Orteig Prize when Lindbergh took off on his successful attempt in the early morning of Friday, May 20, 1927.   Over the next 33.5 hours he and the "Spirit"—which Lindbergh always jointly referred to simply as "WE"—faced many challenges including skimming over both storm clouds at 10,000 feet (3,000 m) and wave tops at as low at 10 ft (3.0 m), fighting icing, flying blind through fog for several hours, and navigating only by the stars (whenever visible), and "dead reckoning" before landing at Le Bourget Airport at 10:22 PM (22:22) on Saturday, May 21.

After the flight, Lindbergh became an important voice on behalf of aviation activities, including the central committee of the National Advisory Committee for Aeronautics (NACA), an appointment made by President Herbert Hoover. He embarked on a three-month cross country tour on behalf of the Daniel Guggenheim Fund for the Promotion of Aeronautics. The 1927 "Lindbergh Tour" culminated with visits to 48 states and 92 cities.
At the conclusion of the tour, Lindbergh spent a month at Falaise, Guggenheim's Sands Point mansion, where he wrote the acclaimed "We", a book about his transatlantic flight.

The massive publicity surrounding him and his flight boosted the aviation industry and made a skeptical public take air travel seriously. Within a year of his flight, a quarter of Americans (an estimated thirty million) personally saw Lindbergh and the Spirit of St. Louis. Over the remainder of 1927 applications for pilot's licenses in the U.S. tripled, the number of licensed aircraft quadrupled, and U.S. Airline passengers grew between 1926 and 1929 by 3,000% from 5,782 to 173,405. Lindbergh later charted both polar and South American air routes, developed techniques for high altitude flying, and during World War II demonstrated how to increase flying range by developing techniques of refining flight attitudes and 'leaning' fuel mixture to decrease the rate of gasoline consumption and improve efficiency.

The winner of the 1930 Best Woman Aviator of the Year Award, Elinor Smith Sullivan, said that before Lindbergh's flight:

"people seemed to think we [aviators] were from outer space or something. But after Charles Lindbergh's flight, we could do no wrong. It's hard to describe the impact Lindbergh had on people. Even the first walk on the moon doesn't come close. The twenties was such an innocent time, and people were still so religious—I think they felt like this man was sent by God to do this. And it changed aviation forever because all of a sudden the Wall Streeters were banging on doors looking for airplanes to invest in. We'd been standing on our heads trying to get them to notice us but after Lindbergh, suddenly everyone wanted to fly, and there weren't enough planes to carry them."

Lindbergh spent his final years on the Hawaiian island of Maui, where he died of lymphoma on August 26, 1974 at age 72.