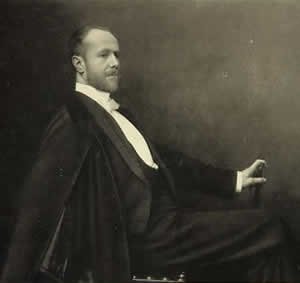 Fernand Edmond Jean Marie Khnopff ( 1858 - 1921) was a Belgian symbolist painter and  theatre set and costume designer. For example, he designed both costumes and set for the World premiere of Ernest Chausson's opera Le Roi Arthus.  He decorated the ceilings of the "Salle des Marriages" (=Wedding Room) of the new Town Hall in Saint Gilles. He also designed decorative panels for the music room of the Palais Stoclet along with Gustav Klimt, who had designed a decorative mosaic for its dining room.

He was born to a wealthy family that had lived in Flanders since the early 17th century but were of Austrian and Portuguese descent.  His early childhood (1859–1864) was spent in Bruges.  His childhood memories of the medieval city of Bruges would play a significant role in his later work. In 1864, the family moved to Brussels. Most male members of his family had been lawyers or judges, and young Fernand was expected to follow suite, but despite attending law school at the Free University of Brussels in order to please his parents, his greatest passion was art, poetry, opera and the theatre.

He followed the works of Baudelaire, Flaubert, Leconte de Lisle and other mostly French authors. He began to frequent the studio of Xavier Mellery, who made him familiar with the art of painting.  And on  25 October 1876, he enrolled for the Cours De Dessin Après Nature ("course of drawing after nature") at the Académie Royale des Beaux-Arts.  Khnopff surrounded himself with fellow souls of a similar mind  -  Delacroix, Ingres, and Moreau. British artists such as Hunt, Watts, Rossetti, Brown and Burne-Jones would become friends.   In March 1898 Khnopff presented a selection of 21 works at the first exhibition of the Vienna Secession and he in turn was influenced by what he saw there.

It goes without saying that when he presented his paintings to the public for the first time at the "Salon de l'Essor" in Brussels, the learned art critics were extremely harsh.  This is par for the course.  In fact the worse thing that can happen to any artist is that their works are lauded by art critics.

The one exception was Emile Verhaeren who wrote a positive review and would remain a lifelong supporter. In 1883, he was one of the founding members of the group Le Groupe des XX. Khnopff exhibited regularly at the annual "Salon" organised by Les XX.

Another supporter was the French novelist Joséphin Péladan the future 'grandmaster' of the Rosicrucian "Ordre de la Rose + Croix".  Péladan asked Khnopff to design the cover for his new book "Le Vice suprême". Khnopff accepted this commission, but the famous soprano Rose Caron was offended by the imaginary portrait it showed, believing it to be her own face.   The vehement reaction of "La Caron" caused a scandal in the Belgian and Parisian press and would help to establish Khnopff's name as an artist. There is no such thing as bad publicity.  Khnopff continued to design illustrations for the works of Péladan, and was invited as guest of honour on the exhibitions of the Parisian "Salon de la Rose + Croix" organised by Péladan. 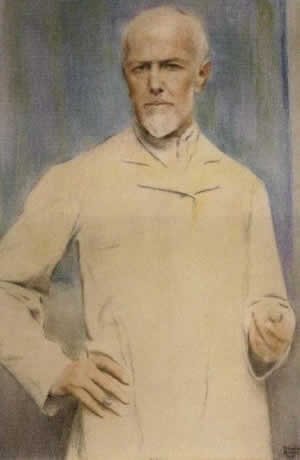 Khnopff is described as “not a very open man and a rather secluded personality,”.  He never married and lived much of his life with his sister, who was one of his favorite subjects. The symbolism in his paintings is extraordinary, extremely subtle and widely misunderstood.  Art critics [sigh art critics] appear to believe he was depicting femme fatales or masculine women or even worse had some sort of attraction to lesbian women, but the symbolism he portrayed in all his paintings was that of Androgyny.  He took this theme to a sort of perfection – combining the concept of the mystic marriage with that of the spiritual path.

Given his total understanding of the symbolic and the spiritual , I did wonder whether he placed his sister in the role of the Higher spirit  in the technique 'love with visualisation', his paintings of her are so ethereal, angelic and elevated with powerful images of Hypnos god of dreams and spiritual experience, that it would make sense; however, this is pure speculation.

I lived in Brussels for four years and witnessed the demolition of some of Belgium's most wonderful buildings.

One of those buildings was Khnopff's house.  From 1900 onwards, Khnopff designed and built his house and studio in Brussels. The house was inspired by the Vienna Secession and more in particular by the architecture of Joseph Maria Olbrich. He made it a  "Temple of the self". So we have here the concept of the Safe House also used by him.  His motto "On a que soi" (=One has but oneself) was inscribed above the entrance door, and in his studio he painted in the middle of golden circle inscribed on the white mosaic floor.  All very symbolic of course – the magic circle.

Khnopff died aged 63 and is buried in Laeken Cemetery.

His paintings are truly beautiful.