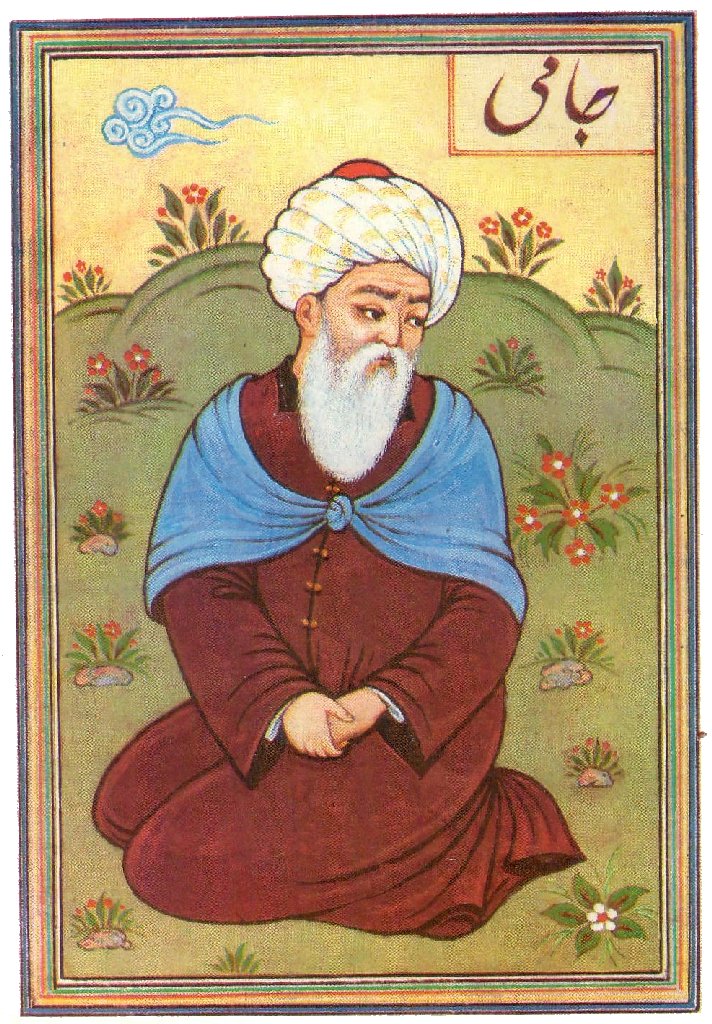 Nur ad-Din Abd ar-Rahman Jami (1414–1492) was one of the greatest Persian poets in the 15th century and one of the last great Sufi poets of Iran.  He was also a  mystic.  Jami played a central role in the Sufi Naqshbandi Order, and his input was key in clarifying Ibn Arabi's thought.

Jami was also recognized by his contemporaries as a major Persian authority in several disciplines, such as science, philosophy, astronomy, music and art.

He wrote approximately eighty-seven books and letters, some of which have been translated into English.

His works range from prose to poetry, and from the mundane to the religious. He  also wrote works of history.

Jami was one of the most prolific writers in Persian literature, and enjoyed fame and prestige during his lifetime not only in his homeland of greater Khurasan and Herat, but also at the Qara-Quyunlu, Aq-Quyunlu, Ottoman courts, and even as far as in India.

Jami lived during the era of the Timurids, the dynasty that ruled Transoxiana, Iran, and Afghanistan from 1370 to 1506.  They had a profound cultural and artistic impact on the history of Central Asia, the Ottoman Empire, and Mughal India in the early modern era. While Timurid fine art such as miniature painting has been extensively studied, the literary production of the era remains relatively unknown in the West.

In his historical work, Habib al-Siyar, Khwandamir, the celebrated historian of
the Timurids, included 211 poets and men of learning of the era, one of whom
was Jami. The sheer number of poets and writers was the result of the patronage of
Timur's offspring, who were semi-independent rulers of different parts of the vast
territory that Timur conquered. The competition among these minor courts created just the right conditions for scholars, poets and artists to flourish.

The Timurid empire at Timur's death in 1405

Unlike most of his contemporaries, Jami was not attached to the court or to the house of any noble, and he did not seek a patron.  Instead, he wrote what he believed to be 'right' . Yet he was generously paid for his works, which were professionally bound and copied by some of the best calligraphers of Herat, thanks to funding provided by his close friend  Alishir Nava'i who would send out Jami’s works to rulers, nobles, and dignitaries.

Jāmī spent his life in Herāt, except for two brief pilgrimages to Meshed (Iran) and the Hejaz. During his lifetime his fame as a scholar resulted in numerous offers of patronage by many of the contemporary Islāmic rulers. He declined most of these offers, preferring the simple life of a mystic and scholar to that of a court poet. His work is notably devoid of panegyrics. His prose deals with a variety of subjects ranging from Qurʾānic commentaries to treatises on Ṣūfism (Islāmic mysticism) and music. Perhaps the most famous is his mystical treatise Lava’iḥ (Flashes of Light), a clear and precise exposition of the Ṣūfī doctrines of waḥdat al-wujūd (the existential unity of Being), together with a commentary on the experiences of other famous mystics.

Jāmī’s poetical works express his ethical and philosophical doctrines. His poetry is fresh and graceful and is not marred by unduly esoteric language. His most famous collection of poetry is a seven-part compendium entitled Haft Awrang (“The Seven Thrones,” or “Ursa Major”), which includes Salmān o-Absāl and Yūsof o-Zalīkhā. Although this collection is modeled on the works of the 13th-century romantic poet Neẓāmī, it bears Jāmī’s unmistakable mark of originality and intellectual vigour. 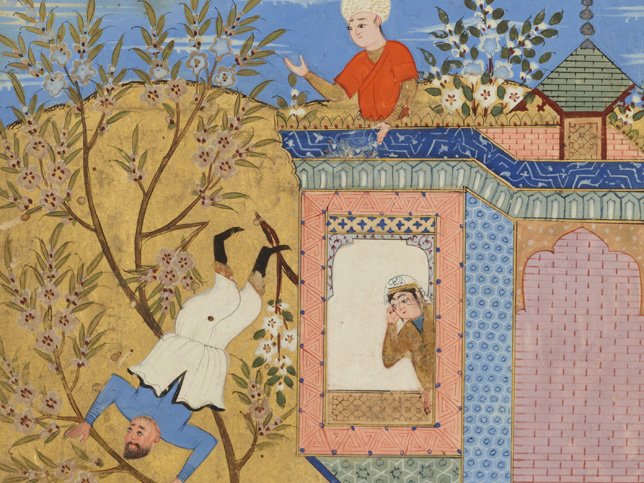 Jami was born in Kharjard near Jam, then Khurasan, now located in Ghor Province of Afghanistan.

His family was originally from Dasht, a small town in the province of Isfahan. ‘Abd al-Rahman’s grand-father, Shams al-Din Muhammad was an honest respected judge (qadi). Disturbed by the turktazi (atrocity and
plunder) of the Turcoman rulers of the region, Shams al-Din Muhammad left Dasht with his family and settled in Kharjard.

Jami was eleven years old when his father took him to Herat, where he studied logic and philosophy.  It seems that most of his study explored kalam- scholastic theology and hadith.  Jami noted that he learned Arabic, its grammar and syntax, from his father, who taught Jami how to read and write both Persian and Arabic.  His other studies included mathematics, natural sciences, and Islamic philosophy at the Nizamiyyah University of Herat. 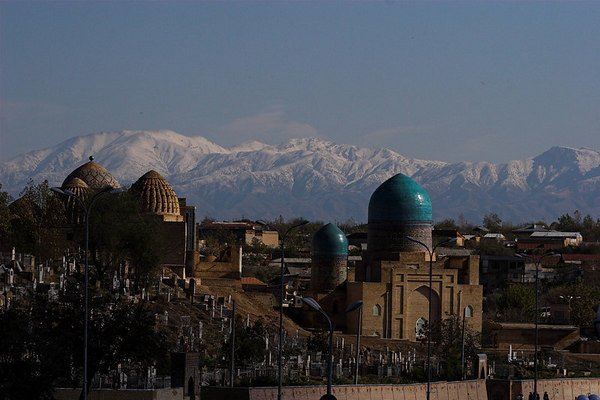 One of the more intriguing aspects of Jami's early years is the way he approached education.

On the whole, Jami strongly resisted a disciplined regimented approach to education.

As he grew older and continued his studies under renowned masters of his era, he often challenged them successfully in discussions, which meant that he had to continuously search for thought-provoking teachers [Home schooling].

In order to continue his education, Jami went to Samarqand, but the exact date of this journey is unclear. Jami studied under Qazizada Rumi (d. 1436), the scholar-researcher in the service of Ulugh Bag, working in the astronomy center which the latter had established. 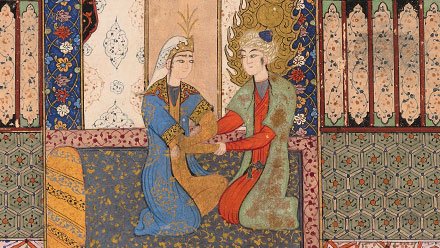 "One may safely assume that Jami initially encountered Sufism
while in Samarqand."

Jami lived in Samarqand for almost sixteen years during the city’s zenith of splendor and beauty. The city that Timur did his best in glorifying, later Ulugh Beg completed, making it the center of knowledge and learning. However, apparently, the struggle of succession between Timur's offspring following the death of ‘Abd al-Latif (d. 1450), Ulugh Beg's son, made the city unsuitable for the Sufi poet so Jami left it for Herat.  No record verifies the exact date when he departed.

Not long after his return from Samarqand, Jami joined the Naqshbandi Order, probably around 1452- 53.  Jami states that he was around forty at the time: 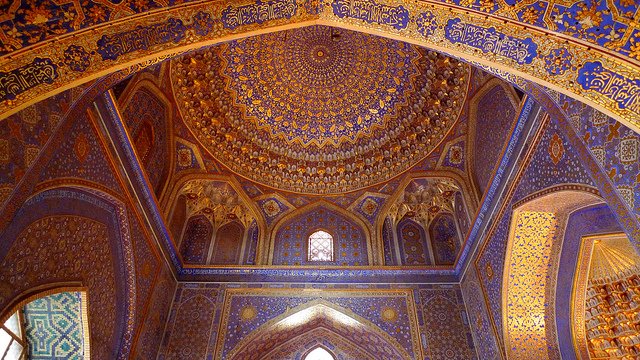 I lost forty years being blind and ignorant.

The Naqshbandi Sufi tariqa was the most prominent order in the region at the time. The sheikh (leader) of the order, Khwaja Ahrar (d.1490), was enormously powerful and influential in Central Asia and Transoxiana.

Up until he joined this order "Jami was not noted for his humility".  His intellectual prowess and his success as a scholar had resulted in his being highly egotistical. "Certainly his reputation for brilliance and sagacity from an early period in his social life fostered this attitude of overconfidence".

Safi reports that after Jami joined the order, Kashghari [his mentor] put him through a
'strenuous training'.  So rigorous was this training that Jami eventually did not want to be around people any longer and spent his time in isolation. When he finally came out of seclusion,  he could not even speak properly. 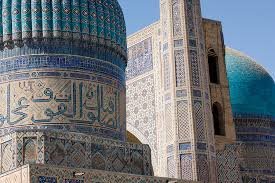 But it had a very positive effect, he became a mystic and a poet.

Jami lived at a time when the social condition of the population in the Timurid domain was not at its best, due to high taxes and oppression by the dynasty. After his initiation, Jami was able to reduce people's suffering through his position at the court and as the poet and Sufi of the Naqshbandis in the city.  "Whenever Jami received a large sum of money or gifts from nobles and rulers, he secretly spent it on the poor, or spent it as endowment on schools, hospices, or khaniqahs (dervish dwellings)".

Jami fathered four sons but three of them died before reaching their first year, so at least some of his inspiration was caused by Grief.

In his role as a Sufi shaykh, however, Jami explained in his texts on how to follow the Sufi path, that in his opinion, love was the fundamental stepping stone for succeeding on the spiritual journey. To a student who claimed never to have loved, he said,

"Go and love first, then come to me and I will show you the way."

Lari [one of his followers] writes that his master's mind, from his youth to his old age, was always occupied with poetry. He was either writing, or thinking about it.   “Poetry was a cover for the secrets, and being a poet was a cover for that buzurgvar (honorable one). ..... he was full of excitement and love when his mind was occupied with poetry.”  In other words during his mystic phase poetry was the means by which he expressed his thoughts best and by which we may know him.

Jami, the last great classical poet of Persian language,  passed away on the eighteenth of Muharram 898/ Nov.11, 1492 after a few days of sickness. 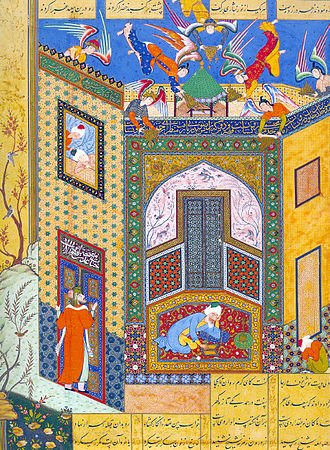 Illustration from Jami's Rose Garden of the Pious, dated
1553. The image blends Persian poetry and Persian miniature
into one, as is the norm for many works of Persian literature.

Among his works are:

Farah Fatima Golparvaran Shadchehr
It seems that composing poetry was a means by which Jami expressed himself best. There are several ghazals by Jami whose subject matter includes social issues such as injustice, hypocrisy, or oppression, and there are also some ghazals in his diwan that can be interpret as being about divine love; yet there also are some ghazals that he wrote,especially those in which he describes the physical beauty of the beloved, that can be interpreted as referring to either divine or worldly love.
Jami’s ruba’iyat are mostly about mystical love. Another genre he uses is tarji'-band, which he has composed with exceptional mastery and skill, explaining mystical love and Sufism elegantly and eloquently. In tarkib-band, Jami has elegized his mentor Sa’d al-Din Kashghari, his own brother's death, his son, and Khwaja Ahrar.
I interpret love in Jami’s mathnawis as divine love.  My argument is that since Jami definitely wrote his mathnawis in his old age, after years that he had joined the Naqshbandis, his understanding of love must have been mystical love. 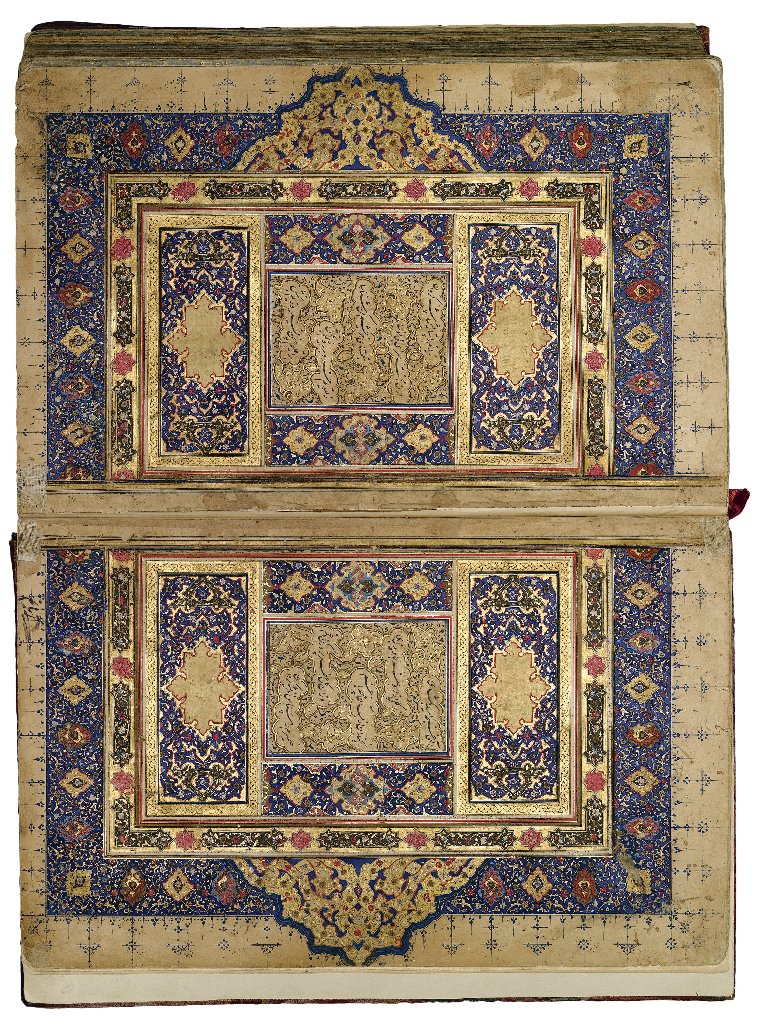 An illustrated and illuminated manuscript of Jami's Yusuf wa Zulaykha

Mathnawi Haft Awrang - Jami composed his most important work, one of the best literary works of Persian literature, after he joined the Naqshbandis and became more familiar with mysticism of the fifteenth century.  It refers to the constellation of the Great Bear.  It is a collection of seven works, the key ones of which are:

Jami's life, as he named his three diwans, followed three stages. During the first stage, Fatihat al-Shabab, in his youth, he was a competent theologian.  During the second stage, Wasitat al- 'Iqd, his middle age, he intensified his faith. But it seems that only in the third stage of his life, Khatimat al-Hayat, the end of his life, did he understand mysticism fully.  The last stages of Jami’s life were actually unhappy because he did not complete the spiritual path.  It appears as though he felt all the earlier stages of his life had been wasted from lack of understanding - the love that he often versified in his poetry may not have penetrated completely into his heart.

The description on this page owes much to the following excellent paper on Jami:

Other reference documents which may be useful for further study include: