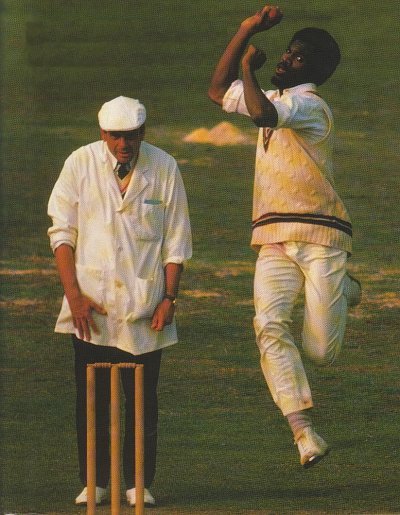 Dicky Bird is the umpire

The following description is derived from Wikipedia

Michael Anthony Holding (born 16 February 1954) is a former West Indian cricketer. One of the fastest bowlers ever to play Test cricket, he was nicknamed "Whispering Death" by umpires due to his quiet approach to the bowling crease.

His bowling was smooth and very fast, and he used his height (6 ft 3 1⁄2 in or 1.918 m) to generate large amounts of bounce and zip off the pitch. He was part of the fearsome West Indian pace battery, together with Joel Garner, Andy Roberts, Sylvester Clarke, Colin Croft, Wayne Daniel and the late Malcolm Marshall that devastated batting line-ups throughout the world in the seventies and early eighties.

Early in his Test career, in 1976, Holding broke the record for best bowling figures in a Test match by a West Indies bowler, 14 wickets for 149 runs (14/149). The record still stands. During his first-class cricket career, Holding played for Jamaica, Canterbury, Derbyshire, Lancashire and Tasmania.

Holding was the bowler in what is often described as "the greatest over in Test history", which he bowled in 1981 in Bridgetown to English batsman Geoff Boycott. The first five balls increased in pace, causing Boycott to have to react very rapidly to avoid being hit. The final ball saw Boycott clean bowled, to the great delight of the crowd. 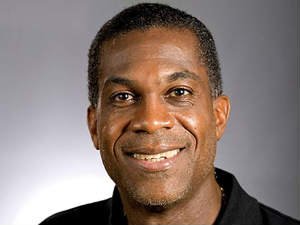 Holding opened the bowling with Andy Roberts in 33 Tests, and the pair claimed 216 wickets at an average of 25.27 runs each, making them one of the most successful new ball partnerships. Despite modest batting talent, he holds the record for the most sixes in a Test career for any player with fewer than 1,000 career runs. He hit 36 sixes in his Test career, placing him at 32 in the all-time list. Remarkably almost a quarter of his Test runs came by way of sixes.

'The Reverse sweep' - On heroes: Michael Holding
Funnily enough, being too young to have witnessed his 14 for 149 at The Oval in 1976 and despite his 249 test wickets at under 24, one of our most vivid memories of Holding is as a batsman. He only made 12 not out at Old Trafford in 1984, but he was at the other end from perhaps the greatest one day innings of them all as Viv Richards smashed an unbeaten 189 as the last wicket pair added 106 in the last 14 overs.
Holding has taken the effortless style and class from his playing days into the commentary box where his wonderful Jamaican drawl and incisive comments have continually shone amongst the sometimes bland words of his colleagues.

Michael Holding was already a Reverse Sweep hero, but his compassion and support for young players just topped things off for us.

In June 1988 Holding was celebrated on the $2 Jamaican stamp alongside the Barbados Cricket Buckle.

Although Michael has written two autobiographies, the quote here comes from a book written by Tony Francis entitled The Zen of Cricket: Learning from Positive Thought