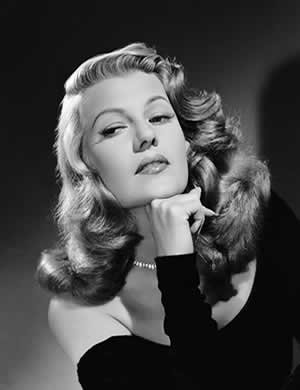 She has an enormous number of films to her credit. Hayworth appeared in a total of 61 films over 37 years. She is one of six women who has the distinction of having danced on screen with both Fred Astaire and Gene Kelly. She is listed by the American Film Institute as one of the 100 Greatest Stars of All Time.

Her films include Music in My Heart, The Lady in Question, Angels Over Broadway, Susan and God, The Strawberry Blonde, Tales of Manhattan, My Gal Sal, The Lady from Shanghai, The Loves of Carmen, Affair in Trinidad, Gilda, Salome, Miss Sadie Thompson, Fire Down Below, and Blood and Sand [amongst many others]. Then there are the musicals. You'll Never Get Rich, opposite Fred Astaire was one of the highest-budgeted films Columbia ever made. The picture was so successful that the following year the studio produced and released another Astaire-Hayworth picture, You Were Never Lovelier. In 1944, Hayworth made one of her best-known films, the musical Cover Girl with Gene Kelly. In Pal Joey she starred with Frank Sinatra.

But Hayworth herself did not seem in later life to view this impressive list with much satisfaction. Looking back she said "I guess the only jewels of my life, were the pictures I made with Fred Astaire." And here we have one clue to her talent because she was not egotistical, in fact she seemed to be riddled for most of her life with self doubt. In 1941, Hayworth said she was the antithesis of the characters she played. "I naturally am very shy ... and I suffer from an inferiority complex." She once complained, "Men fell in love with Gilda, but they wake up with me."

Her on screen image was initially as an 'exotic foreigner', in Dante's Inferno, for example, she played a Russian dancer. She was an Argentinian in Under the Pampas Moon and an Egyptian beauty in Charlie Chan in Egypt. In 1936 she took her first starring role as a "Latin type" in Human Cargo. With her then husband and studio head Cohn's encouragement, however, she changed her hair color to dark red and her name to Rita Hayworth, her mother's maiden name. The link with her Irish-American ancestry led her to become one of the foremost Hollywood stars.

Rita Hayworth's sensuousness and sexiness was totally different from later stars like Marilyn Monroe. It was subtle and understated, but totally bewitching for huge numbers of men. In 1939 Cohn used Hayworth in a small but important role as a man-trap in the aviation drama Only Angels Have Wings. This film was a huge box-office success and fan mail for Hayworth poured in. In one of her most notable screen roles, Hayworth played Doña Sol des Muire, the first of many 'screen sirens'. In August 1941 Life magazine featured a photo in which she lounged seductively in a black-lace negligee.

But in a notable 1980s interview Hayworth said, "Everybody else does nude scenes, but I don't. I never made nude movies. I didn't have to do that. I danced. I was provocative, I guess, in some things. But I was not completely exposed."

So she was no hard-nosed Hollywood siren at all. In reality she was sensitive, easily hurt and very volatile. She was also, ironically given her pin-up status in the War, against war and against hurt. Orson Welles one of her husbands was to say,

...the angriest was when she found out that they’d put her [name] on the atom bomb. Rita almost went insane, she was so angry. She was so shocked by it! Rita was the kind of person that kind of thing would hurt more than anybody.”

Where else did her inspiration and talent come from? Some of it was in her genes, although sheer hard work also had a part to play.

Hayworth was born in New York in 1918 as Margarita Carmen Cansino, the oldest child of two dancers. Her father was of Spanish and Sephardic descent. Her mother, Volga Hayworth, was of Irish descent and had performed with the Ziegfeld Follies. Her grandfather was renowned as a Spanish classical dancer. He popularized the bolero and his dancing school in Madrid was world famous. Hayworth later recalled, "From the time I was three and a half... as soon as I could stand on my own feet, I was given dance lessons." She noted "I didn't like it very much... but I didn't have the courage to tell my father, so I began taking the lessons. Rehearse, rehearse, rehearse, that was my girlhood". During the Great Depression her father partnered with his daughter and took her with him to work across the border in Tijuana, Mexico. Her film career started at 16. She signed for Fox corporation then moved to Columbia pictures when the studio head Harry Cohn signed Hayworth on a long-term contract.

Hayworth was a volatile, emotional person. This shows not only in her relationships with men, but is also evident in her relationship with Columbia Pictures. In 1943, she was suspended without pay for nine weeks because she refused to appear in Once Upon a Time. She left Hollywood to marry Prince Aly Khan breaking her contract. She was suspended for failing to report to work on the film Affair in Trinidad. In 1952 she refused to report for work because "she objected to the script." In 1955, she sued to get out of a contract with the studio, but asked for her $150,000 salary, alleging filming failed to start when agreed.

And she could also be paranoic “ I was under exclusive contract, like they owned me ... I think he had my dressing room bugged ... He was very possessive of me as a person, he didn't want me to go out with anybody, have any friends. No one can live that way. So I fought him ... You want to know what I think of Harry Cohn? He was a monster” But he wasn't, he was a studio boss whose job it was to produce pictures. Cohn even expressed his frustration with Hayworth's judgment in an interview with Time magazine.

“Hayworth might be worth ten million dollars today easily! She owned 25% of the profits with her own company and had hit after hit and she had to get married and had to get out of the business and took a suspension because she fell in love again! ...Think of what she could have made! But she didn't make pictures! She took two or three suspensions! She got mixed up with different characters! Unpredictable!”

So she was naturally a 'right brainer' and something of an extreme one at that. But her abiding inspiration appears to have come through a succession of tumultuous love affairs, always followed by equally tumultous divorces not very long afterwards. Her whole life appears to have been a roller coaster of love and grief in very quick succession. Hayworth was married and divorced five times. She said, "Basically, I am a good, gentle person, but I am attracted to mean personalities." But this is not the whole story. People of passion tend not to be able to adapt to what marriage entails. She was a lover by nature, not a wife.

In 1937, when Hayworth was 18, she married Edward Judson, who was more than twice her age. "He helped me with my career," Hayworth conceded after they divorced, "and helped himself to my money." She filed for divorce from him on February 24, 1942. 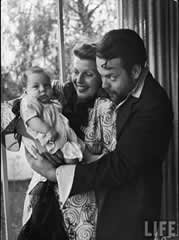 Hayworth married Orson Welles (photo right) on September 7, 1943. They had a daughter, Rebecca, born December 17, 1944. They too struggled in their marriage. Hayworth filed for divorce in 1948. 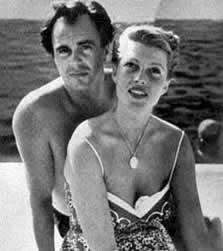 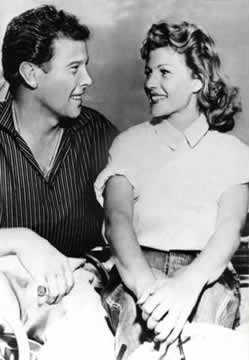 When Hayworth and Dick Haymes first met, he was still married,  desperate for money, and did not have solid proof of American citizenship. Not long after he met Hayworth, US officials initiated proceedings to have him deported to Argentina for being an illegal alien. The two were married on September 24, 1953. At one point, in their tempestuous marriage, the couple was effectively imprisoned in a hotel room as sheriff's deputies waited outside threatening to arrest Haymes for outstanding debts. After a tumultuous two years together, Haymes struck Hayworth in the face in 1955 in public. Hayworth packed her bags, walked out, and never returned. 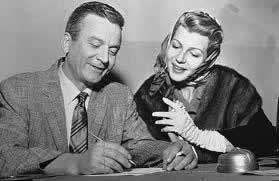 Hayworth then began a relationship with film producer James Hill, whom she married on February 2, 1958. In his book, In the Arena, Charlton Heston wrote that one night he and his wife had dinner with Rita and Hill, the occasion, "Turned into the single most embarrassing evening of my life, Hill heaped obscene abuse on her until she was reduced to a helpless flood of tears, her face buried in her hands." Those at the dinner sat stunned, witnesses to a  "Marital massacre". On September 1, 1961, Hayworth filed for divorce.

Hayworth's private life was entirely run by high emotion both positive and negative. And all of this became worse and worse, and one of the reasons it got worse was alcohol. Hayworth's behaviour in the end bordered on the manic depressive and it was as a result of alcohol abuse and living at such a high emotional level.

Barbara Leaming writes in her biography that due to her addiction to alcohol and the stresses of her life she aged before her time. In 1956, it was said "Despite the artfully applied make-up and shoulder-length red hair, there was no concealing the ravages of drink and stress. Deep lines had crept around her eyes and mouth, and she appeared worn, exhausted, older than her thirty-eight years." 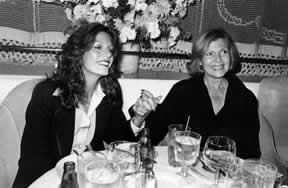 "I remember as a child that she had a drinking problem.  ... As a child, I thought, 'She has a drinking problem and she's an alcoholic.' That was very clear and I thought, 'Well, there's not much I can do. I can just, sort of, stand by and watch.' It's very difficult, seeing your mother, going through her emotional problems and drinking and then behaving in that manner ... Her condition became quite bad. It worsened and she did have an alcoholic breakdown and landed in the hospital."

By 1972, Hayworth was 54 years old and could not remember her lines. By 1973, with worsening health, she abandoned the film set. She never returned to acting. Eventually the emotional overload she had lived with her entire life coupled with the alcohol abuse took its final toll and she was diagnosed with Alzheimer's disease.

"It was the outbursts," said her daughter. "She'd fly into a rage. I can't tell you. .... She wasn't diagnosed as having Alzheimer's until 1980. There were two decades of hell before that."

"Rita Hayworth was one of our country's most beloved stars", said President Ronald Reagan, "Glamorous and talented, she gave us many wonderful moments on stage and screen and delighted audiences from the time she was a young girl. …. She was a friend who we will miss.."

Overload may produce amazing people but it takes a terrible toll in the end. 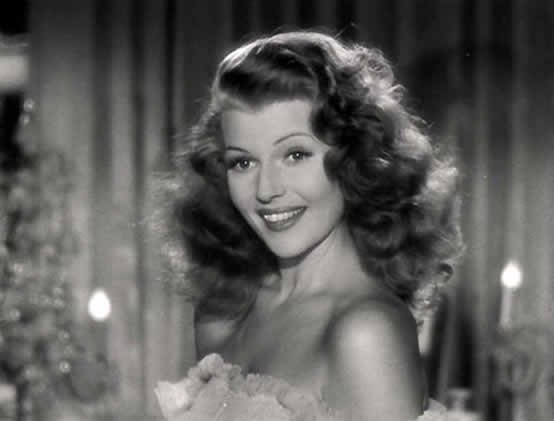