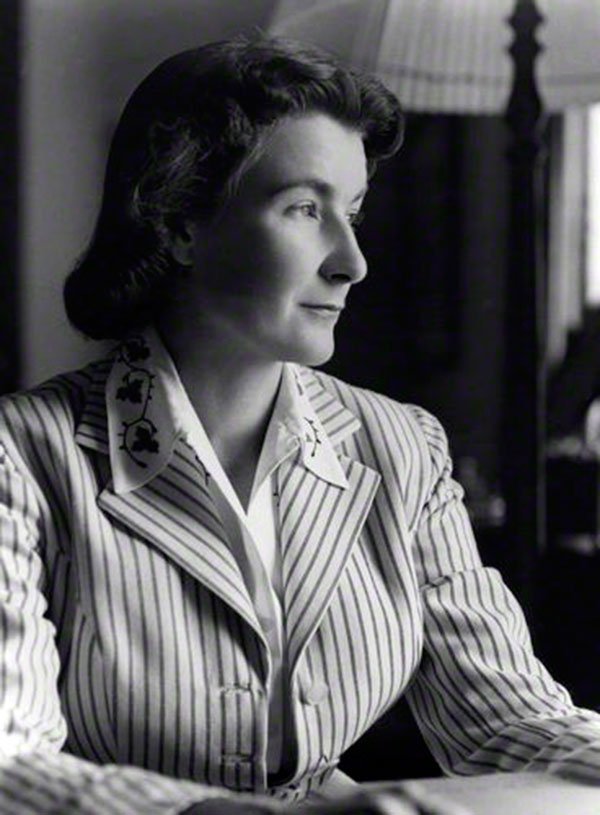 Jacquetta Hawkes (5 August 1910 – 18 March 1996), born Jessie Jacquetta Hopkins,  pursued a distinguished career in literature and in archaeology. During the Second World War she became a civil servant and in 1941 she was appointed Assistant Principal of the Post-War Reconstruction Secretariat. She moved to the Ministry of Education, became an established Principal and Secretary of the UK National Committee for UNESCO, which post she held until 1949.

From 1949 to 1951 she was archaeological adviser to the Festival of Britain. She became a governor of the British Film Institute, and in 1971 she was made a vice-president of the Council for British Archaeology.

She was president of the Warwickshire CPRE (Council for the Preservation of Rural England) and a life trustee of the Shakespeare Birthday Trust. She was an active governor of the Boys' King Edward VI Grammar School, and also of the local girls' grammar school. It was late in 1957 that she and her then husband J B  Priestley, together with Diane Collins and her husband Canon John Collins, were instrumental in founding the Campaign for Nuclear Disarmament.

And Jacquetta Hawkes had a number of very interesting spiritual experiences, made the more interesting because she was an intellectual. She might be better classified as a mystic scientist. 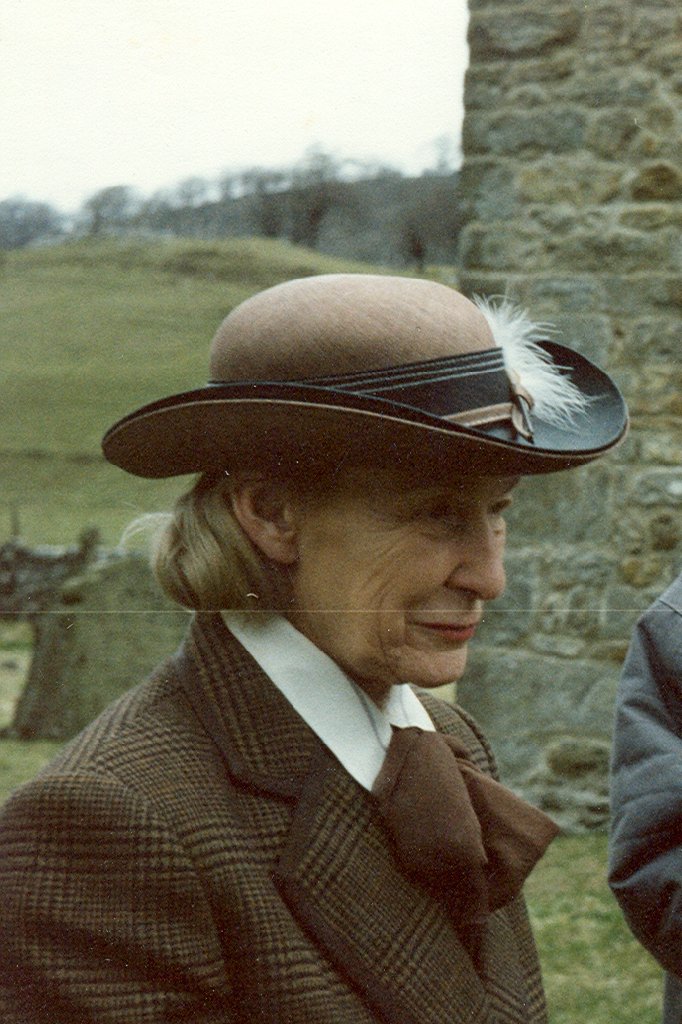 Jacquetta Hawkes in 1986, at Hubberholme church

Hawkes urges her readers to imagine themselves in ways that make nonsense of the notion of individual beings, let alone of nations.

She uses maps to illustrate the epic migrations and divisions of the world's land-masses over billennia [sic], and proposes herself less a Briton than a citizen of Gondwanaland.

She offers an account of selfhood in which, molecularly and emotionally, "every being is united both inwardly and outwardly with the beginning of life in time and with the simplest forms of contemporary life".

In Hawkes's vision the "individual" (from the Latin individuus, meaning indivisible) is not unique but rather soluble or dispersed.

Hawkes is perhaps best known generally for her book A Land (1951), which is indeed an extraordinary book.  Especially for those interested in spiritual subjects.  The other book worthy of mention for its spiritual content is her only book of poetry, Symbols and Speculations, published in 1948.

A Land begins with a warning. "I have used the findings of the two sciences of geology and archaeology," Hawkes declares, "for purposes altogether unscientific." So starts her exploration of 4bn years of Earth-history, whose purpose is to demonstrate that we are all a by-product of the terrain on which we live, and to advance a synthetic cosmogony of consciousness, culture and geology.  Ardent and personal, A Land became a bestseller, and one of the defining British non-fiction books of the postwar decade. It was described by one reviewer as “Delphically out-of-time in its ecstatic holism”!

Other descriptions of A Land called it “a geological prose-poem” and “a neo-Romantic vision of the countryside as a vast and inadvertent work of land-art; a speculative account of human identity as chthonic in origin and collective in nature; and a homily aimed at rousing us from spiritual torpor” and perhaps even more lyrical “a lusty pagan lullaby of longing”.  It is thus rather relevant to this site, a fact echoed in yet another comment – “its intensity approaches the visionary”. 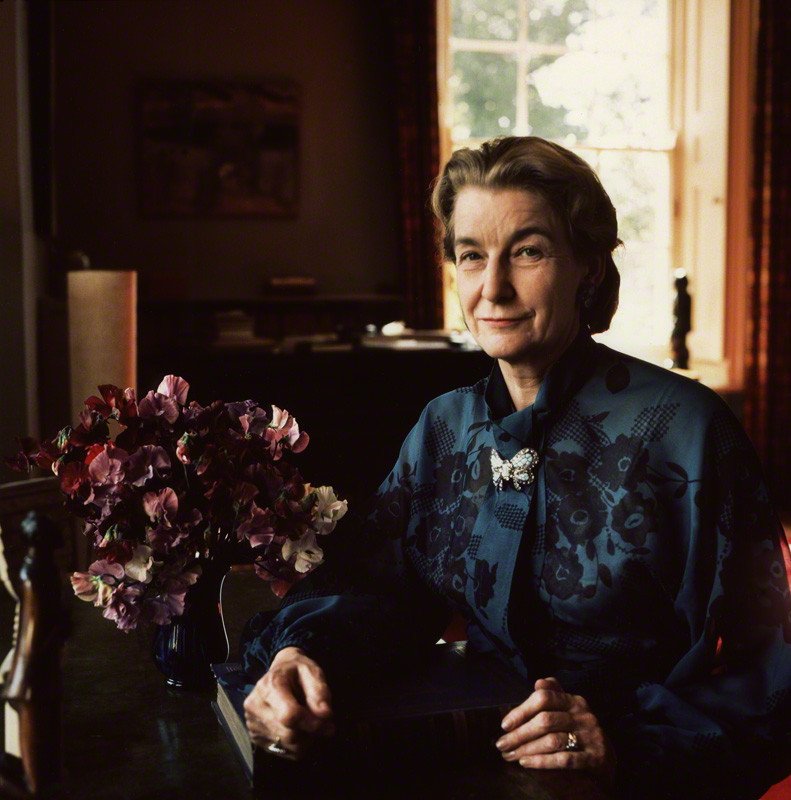 Harold Nicolson, whose rave review helped launch A Land, sensed something of what he was dealing with. "There is," he noted with awe, "a weird beauty in this prophetic book …it is written with a passion of love and hate."

Hawkes was someone for whom the feeling human body was the first principle of the thinking human mind, and it is with a feeling human body that the first chapter of A Land begins: "When I have been working late on a summer night, I like to go out and lie on the patch of grass in our back garden … this hard ground presses my flesh against my bones and makes me agreeably conscious of my body."

From that patch of grass – on Primrose Hill in north London – Hawkes sends her mind out journeying. Her mind moves downwards, as if the soil were continuous with her skin, down through the humus and topsoil, into the bedrock of London clay. Her mind moves upwards, as if the air were continuous with her skin, up through the "fine silhouettes of the leaves immediately overhead", up past the chimney pots and at last to "stray among the stars". And her mind also moves sideways, out across "the huge city", out along "the railways, roads and canals rayed out towards all the extremities of Britain".

In other words, Jacquetta Hawkes could go out of body.

She was born Jacquetta Hopkins in 1910, the third child of Sir Frederick Gowland Hopkins and Lady Hopkins (nee Jessie Stephens). Her father was a fellow of Trinity College, Cambridge, where his researches into biochemistry led to his discovery of vitamins for which in 1929 he was awarded a Nobel Prize. He was a cousin of the poet Gerard Manley Hopkins. His younger daughter combined the rigours of scholarly research with the imagination of a poet and a writer.

Jacquetta was a remarkable child. She seems to have had an idyllically happy childhood. Her mother had trained as a nurse and had met her future husband when both were working at Guy's Hospital. She took her children round the museums of Cambridge, where Jacquetta was fascinated by the exhibits of ancient pottery and jewellery. When she learned that their house, 71 Grange Road, had been built where a Roman road was overlapped by an Anglo-Saxon cemetery, and that a beautiful amber necklace had been dug out from below one of the gateposts, she was determined to try her own excavations on the family lawn. This was firmly forbidden. Nevertheless Jacquetta crept out after dark with a torch and a trowel and proceeded to try and dig up the lawn. Alas, she was only able to unearth a few fragments of "dull earth" and her right hand was badly blistered. But her future was determined.

Hawkes herself says that she grew up in an "extraordinarily reserved" family, who were "as silent as trees" emotionally, but intellectually brilliant. At nine, she wrote an essay declaring that she would be an archaeologist. At 18 she went to Cambridge to read archaeology.

At the end of her second year, as a particularly promising student, she was sent as a volunteer to her first serious excavation of a pre-Roman Celtic capital just outside the Roman town of Colchester. The director of the excavation was a brilliant young archaeologist, Christopher Hawkes, who soon fell in love with this beautiful young girl, as did a number of other male excavators. She received several proposals of marriage. Christopher Hawkes was preferred. 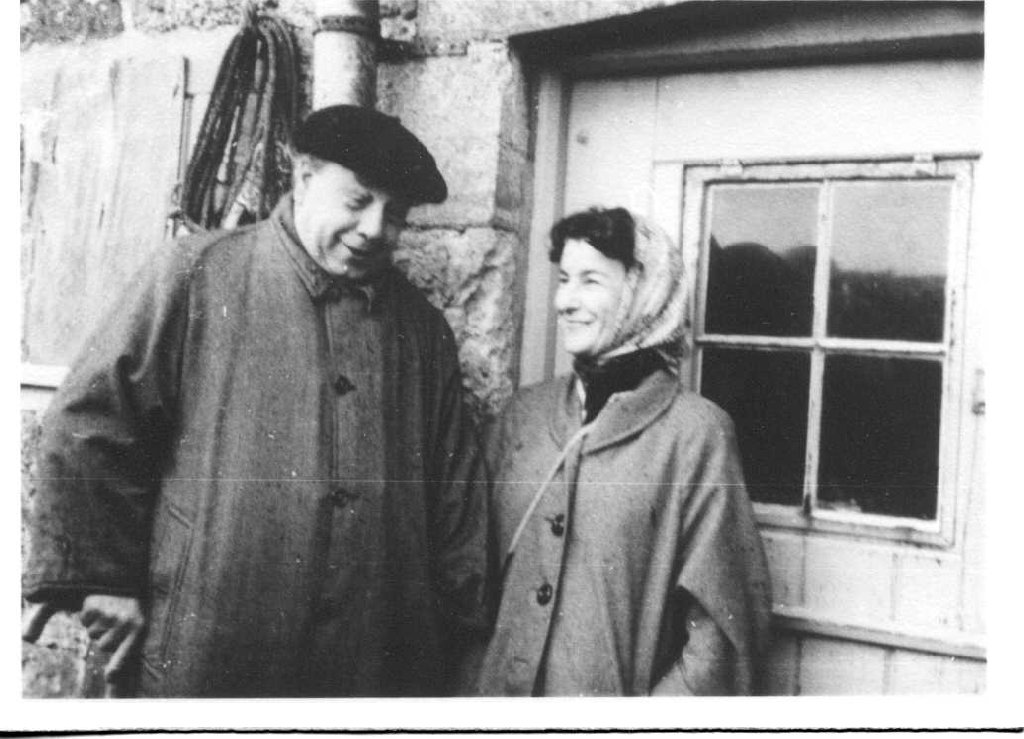 Hawkes and J B Priestley

She married Christopher Hawkes, then an Assistant Keeper at the British Museum, when she was 22.

Hawkes was the first woman to study archaeology and anthropology at Newnham College Cambridge where she graduated with first class honours. She then travelled to Palestine – then under the British mandate – to excavate a Paleolithic-era cave-dwelling on Mount Carmel.

Several years of a pleasantly companionable marriage followed. They carried out excavations on their own and singly. Jacquetta was alone in the Channel Islands and wrote her first book, The Archaeology of Jersey, published in 1939. In 1938 her son Nicolas was born. Early the following year Jacquetta was supervising her own excavation in Ireland.

The war saw Jacquetta and Christopher Hawkes separated for considerable periods, never a good thing for marriage. She found herself becoming increasingly restive with a desire for more imaginative writing than she could then find in the purely scholarly world of archaeology, though she continued to publish scholarly works, Prehistoric Britain (with Christopher Hawkes in 1944) and Early Britain in 1945.

During the war Jacquetta met and fell passionately in love with the poet W.J. Turner. This affair stimulated her imaginative and creative faculties and she published her only book of poetry, Symbols and Speculations, in 1948. It is a clear result of her joy with Walter Turner, and her desperate grief when he died suddenly of a brain haemorrhage in December 1946.

As Secretary to the UK Committee, Jacquetta was occupied in preparations for the first UNESCO conference in Mexico City in 1947. When she learnt that the writer J.B. Priestley was to be one of the senior UK representatives, she went to Sir John Maud, head of the department, to protest on the grounds that Priestley was merely a popular author of insufficient literary calibre. Luckily for her Maud insisted that Priestley, with his experience of the theatre as well as of literature and the fact that he was already well known abroad, would be an eminently suitable representative. In Mexico City Jacquetta and Jack Priestley fell deeply in love; they remained so for the rest of their lives. 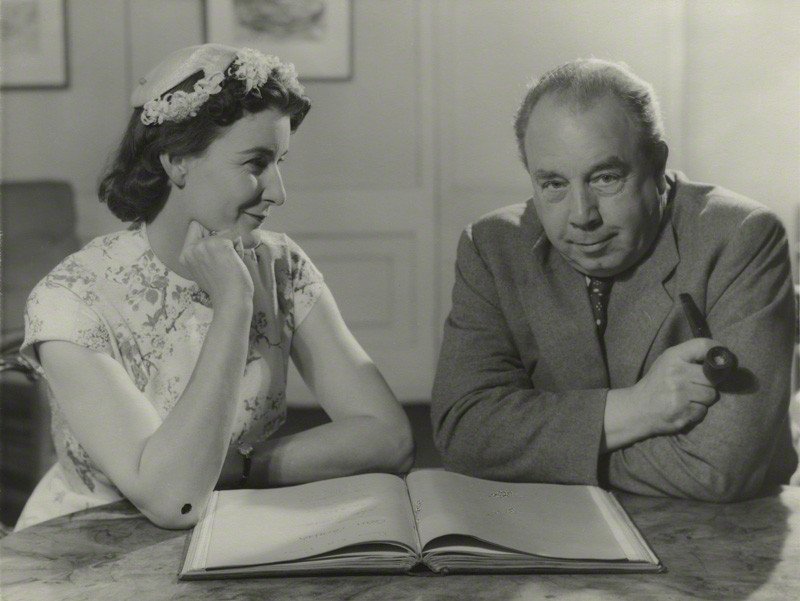 In 1949 Jacquetta left the Civil Service to devote herself to imaginative writing. Her first great success was A Land, published in 1953. It was not until 1953 that her and Jack's marriages were dissolved, and they were able to marry and live together, at first at Brooke House in the Isle of Wight and from the early Sixties until Jack's death in 1984 at Kissing Tree House, Alveston, outside Stratford-upon-Avon. Here they lived and wrote, entertained their many friends and travelled extensively. Jack Priestley attributed the outstanding success of their marriage to:

a balance of the masculine and feminine aspects of each - Jack with his deeply intuitive approach to life and Jacquetta with her masculine intellect. "Jacquetta is an introvert," he said. "She needs me to warm her towards people and the world." Whatever it was, it certainly made for a rare and lasting union.

After Jack's death in 1982 Jacquetta moved to Littlecote, an attractive house in the Cotswold town of Chipping Camden. Here she pursued her early delight in church architecture and old buildings, and in all forms of natural history, especially ornithology.  She died in Cheltenham on 18 March 1996 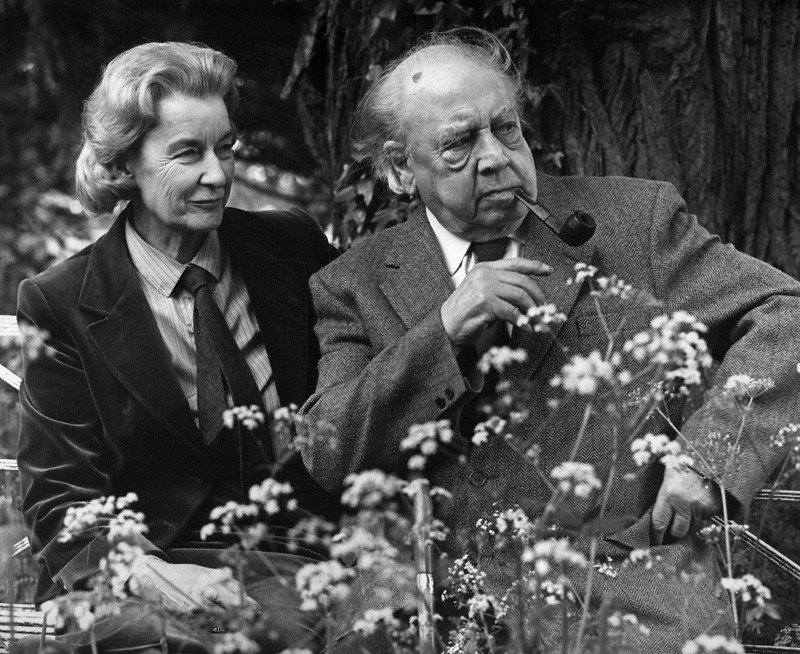 Jacquetta, partly by nature, and partly from her early training at home, was a person of almost compulsive honesty. …. She also was and remained an outstandingly beautiful and fascinating woman, assisted by her impeccable taste in dress. She presented a cool and rather formal exterior. But there was a suggestion of hidden fires. She had a lovely but ambiguous smile, a kind of Mona Lisa look, that presented men with a challenge. She seemed a classical figure, something of a goddess, a mixture of Athena and Aphrodite - "ice without and fire within," commented Jack [J B Priestley] after their first meeting.

Jacquetta did not suffer fools, and could be sharp with remarks or actions she considered foolish. She could also be demanding and imperious, but if she felt she had wounded anyone or behaved unreasonably she was quick to apologise and make amends. Some tended at first to be intimidated by her formal manner and her erudition but she inspired great love in women as well as men.