This is from Wikipedia, I haven’t altered the description.  Suffice to say Harunobu was involved in martial arts and Shinto. 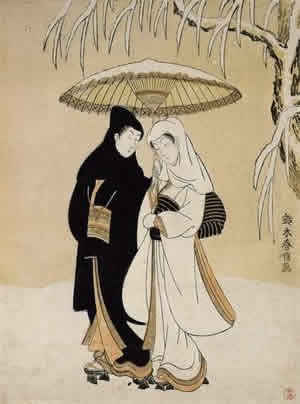 Much about Harunobu's life is unknown.

Harunobu began his career in the style of the Torii school, creating many works which, while skillful, were not innovative and did not stand out. It was only through his involvement with a group of samurai that Harunobu tackled new formats and styles.

In 1764, as a result of his social connections, he was chosen to aid these samurai in their amateur efforts to create calendar prints. Calendars prints of this sort from prior to that year are not unknown but are quite rare, and it is known that Harunobu was close acquaintances or friends with many of the prominent artists and scholars of the period, as well as with several friends of the shogun. Harunobu's calendars, which incorporated the calculations of the lunar calendar into their images, would be exchanged at Edo gatherings and parties.

These calendar prints, would be the first nishiki-e (brocade prints). As a result of the wealth and connoisseurship of his samurai patrons, Harunobu created these prints using only the best materials he could. Harunobu experimented with better woods for the woodblocks, using cherry wood instead of catalpa, and used not only more expensive colors, but also a thicker application of the colors, in order to achieve a more opaque effect.

The most important innovation in the creation of nishiki-e was the ability of Harunobu, again due to the wealth of his clients, to use as many separate blocks as he wished for a single image; Just 20 years previously, the invention of benizuri-e had made it possible to print in three or four colors; Harunobu applied this new technique to ukiyo-e prints using up to ten different colors on a single sheet of paper. The new technique depended on using notches and wedges to hold the paper in place and keep the successive color printings in register.

Harunobu was the first ukiyo-e artist to consistently use more than three colors in each print. Nishiki-e, unlike their predecessors, were full-color images. As the technique was first used in a calendar, the year of their origin can be traced precisely to 1765.

In the late 1760s Harunobu thus became one of the primary producers of images of bijinga (pictures of beautiful women) and kabuki actors of Edo, and of similar and related subjects for the Edo print connoisseur market. In a few special cases, notably his famous set of eight prints entitled Zashiki hakkei (Eight Parlor Views), the patron's name appears on the print along with, or in place of, Harunobu's own. The presence of a patron's name or seal, and especially the omission of that of the artist, was another novel development in ukiyo-e of this time.

Between 1765 and 1770, Harunobu created over twenty illustrated books and over one thousand color prints, along with a number of paintings. He came to be regarded as the master of ukiyo-e during these last years of his life