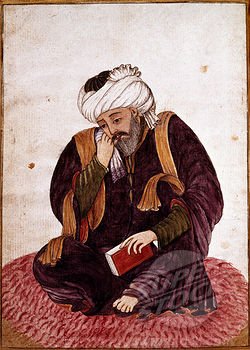 He is still very influential in the middle east even today.  Copies of his collected works are widely available in Iran, Afghanistan and Tajikistan, and his poetry is taught in schools where children learn the poems by heart.  His proverbs and sayings are also much quoted.

Many of his poems have been used in paintings and in Persian caligraphy.  Persian composers have composed pieces inspired by Hafez's poems and the  Polish composer Karol Szymanowski composed The Love Songs of Hafiz using a German translation of Hafez poems.  Most libraries in India, Pakistan, and Iran contain his Diwan.  Hafez not only influenced the Islamic world, but his work is widely respected by Hindus, Christians and philosophers.  And as you can see they have also had an impact on people like me. 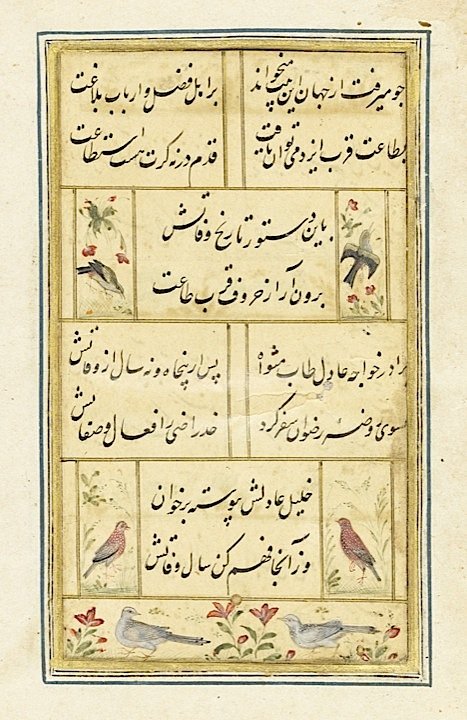 A text page from the Dīvān of Ḥāfiẓ, calligrapher
'Abd al-Ṣamad, probably ca. 1582

Hafez was born in Shiraz, Persia [Iran]. Despite his profound effect on Persian life and culture and his enduring popularity and influence, few details of his life are known. Accounts of his early life rely upon traditional anecdotes. Early tazkiras (biographical sketches) mentioning Hafez are generally considered unreliable.

'Modern scholars generally agree' (but why I don't know) that Hafez was born either in 1315 or 1317.  The date of his death may be more reliably known from an account by Jami.

Hafez was supported by patronage from several successive local regimes: Shah Abu Ishaq, who came to power while Hafez was in his teens; Tamerlane [Timur] at the end of his life; and  Shah Mubariz ud-Din Muhammad (Mubariz Muzaffar).  His work flourished under the twenty-seven year reign of Jalal ud-Din Shah Shuja (Shah Shuja).

Anecdote and myth attribute him with an extraordinary memory.   Hafez is said to have known by heart the works of Jalal ad-Din Muhammad Rumi, Saadi, Farid ud-Din and Nizami. 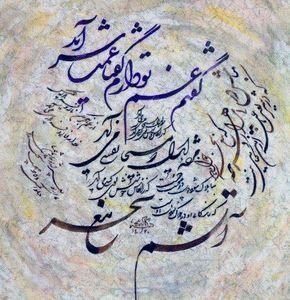 There appears to be quite a lot of argument amongst scholars as to whether his poetry is literal or mystic [or both].  I favour the latter.  I think that, like a lot of poetry,  it can be read both ways.  The very people whose poetry he knew, are an indication that  he was steeped in this tradition and his spiritual experiences seemed to have been a perfect introduction to this form of expression.   Wilberforce Clarke saw him as “a poet of didactic, ecstatic mysticism in the manner of Rumi” and this is indeed how his poetry reads.  He was born into a tradition of poets who believed that spiritual realities are better described using symbolism and poetry rather than prose.

In composing poems of mystic content, they imbued every word and image with mystical undertones, thereby causing mysticism and lyricism to essentially converge into a single tradition.

Hafez embraced the fusion and thrived on it. W.M. Thackston  said that Hafez:

sang a rare blend of human and mystic love so balanced...that it is impossible to separate one from the other. 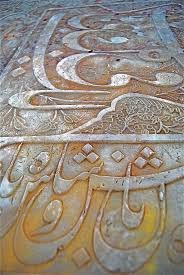 For this reason among others, the history of the translation of Hafez has been a complicated one, and few translations into western languages have been wholly successful.

There are complications arising from the number of versions of his work and from some of the translations which are sometimes translations of translations and thus lose a lot in the process.  Even in the original language, there is no definitive version of his collected works (or 'Diwani'); which can include anything from 573 to 994 poems.

There have been a number of more recent sustained scholarly attempts, for example by Mas'ud Farzad, Qasim Ghani and others in Iran -  to authenticate his work, and remove errors introduced by later 'editors', but the problems with the translations persists.

As someone who has translated the poems of Rimbaud, Verlaine  and Baudelaire for this website because the translations available were so dreadful, I can vouch for the problems that arise when a literally minded person translates spiritual verse. 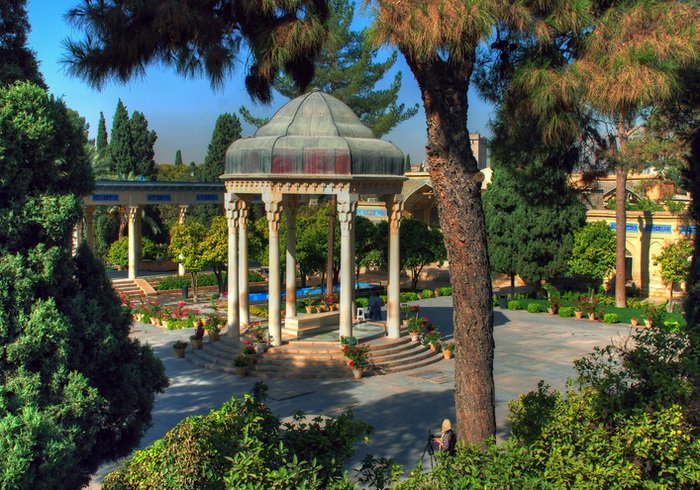 Poetry is by its nature playing with words, using words as symbols and forming music from sounds.  The moment you translate you have lost the music.  And Hafez liked to play with words.  Thus a word such as gowhar can mean both "essence, truth" and "pearl" .  There is layer upon layer of meaning; all very wonderful from an enjoyment perspective, but for a translator a sort of nightmare.

Nevertheless I have used what appears to be the best of the translations [although I am in  no real position to judge] because I wanted to include his work. 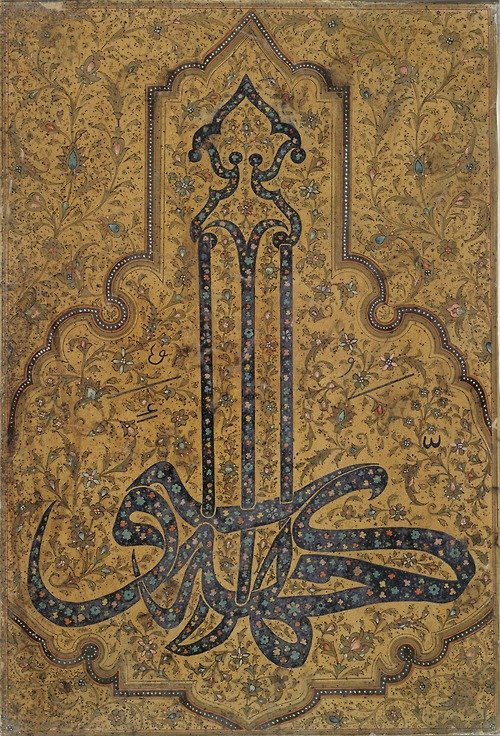 Where did his inspiration come from?

According to one tradition, before meeting his patron, Hajji Zayn al-Attar,

Hafez had been working in a bakery, delivering bread to a wealthy quarter of the town. There he first saw Shakh-e Nabat, a woman of great beauty, to whom some of his poems are addressed. Ravished by her beauty, but knowing that his love for her would not be requited, he allegedly held his first mystic vigil in his desire to realize this union. During this he encountered a being of surpassing beauty who identified himself as an angel, and his further attempts at union became mystic; a pursuit of spiritual union with the divine.

At age 60 he is said to have begun a Chilla-nashini, a 40-day-and-night vigil by sitting in a circle which he had drawn for himself. 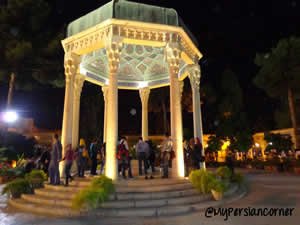 “On the 40th day, he once again met with the image of  Zayn al-Attar on what is known to be their fortieth anniversary and was offered a symbolic cup of wine. It was there where he is said to have attained Cosmic Consciousness [nirvana]".

Twenty years after his death, a tomb (the Hafezieh) was erected to honor Hafez in the Musalla Gardens in Shiraz. The current Mausoleum was designed by André Godard, French archeologist and architect, in the late 1930s. Inside, Hafez's alabaster tombstone bears two of his poems inscribed upon it.

The pictures have been chosen for their beauty.