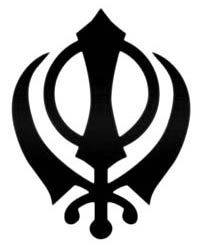 It is 1,430 pages long and is written entirely in verse.  It is the longest book of rhymed poetry in the world.  This book, sacred to the Sikhs, contains the poems and songs of the ten gurus, as well as the poems of many Hindu and Moslem saints whose works are in harmony with Sikh beliefs.

When the second Sikh guru – Guru Angad – obtained the guru-ship from Nanak he not only continued the tradition of sacred poetry, but also started to bring together the first guru and founder of Sikhism - Nanak’s poems into one book, written in a form of the Punjabi language in the Gurmuki script.

As the guru-ship passed successively from one guru to the next, poetry was added to the existing poetry, the third guru Amar Das, for example not only added his poetry but also included poetry from Hindu saints.  The two volumes he collected survive to this day.

But as Sikhism spread, so did the number of copies and the problem of authenticity started to arise.

This problem was tackled in about 1604 under the leadership of the 5th guru Arjan.  Calling on the help of an historian, Bhai Gurdas, and working in a little spot in the forest outside Amritsar, they set to work to try to recreate an authentic version.

By that time, a vast amount of poetry had been handed down.  Arjan himself had composed thousands of poems and hymns.  Selections had to be made from both his work and the work of the preceding four gurus.   Arjan also wanted to add the works of several Muslim Sufis and Hindu mystics – including Kabir.  And so Arjan sat making selections and rejecting those works he considered were not genuine, whilst Bhai Gurdas copied the chosen pieces in the Gurmukhi script.

Arjan organised the collection into 31 sections, each section contains poems written in one ‘raga’ or melody pattern – a form in Hindu music having the melodic rhythm prescribed by tradition.  The ragas appear in a particular order.  Each raga has its own distinctive intervals, rhythms and timing and each is associated with a particular season of the year. 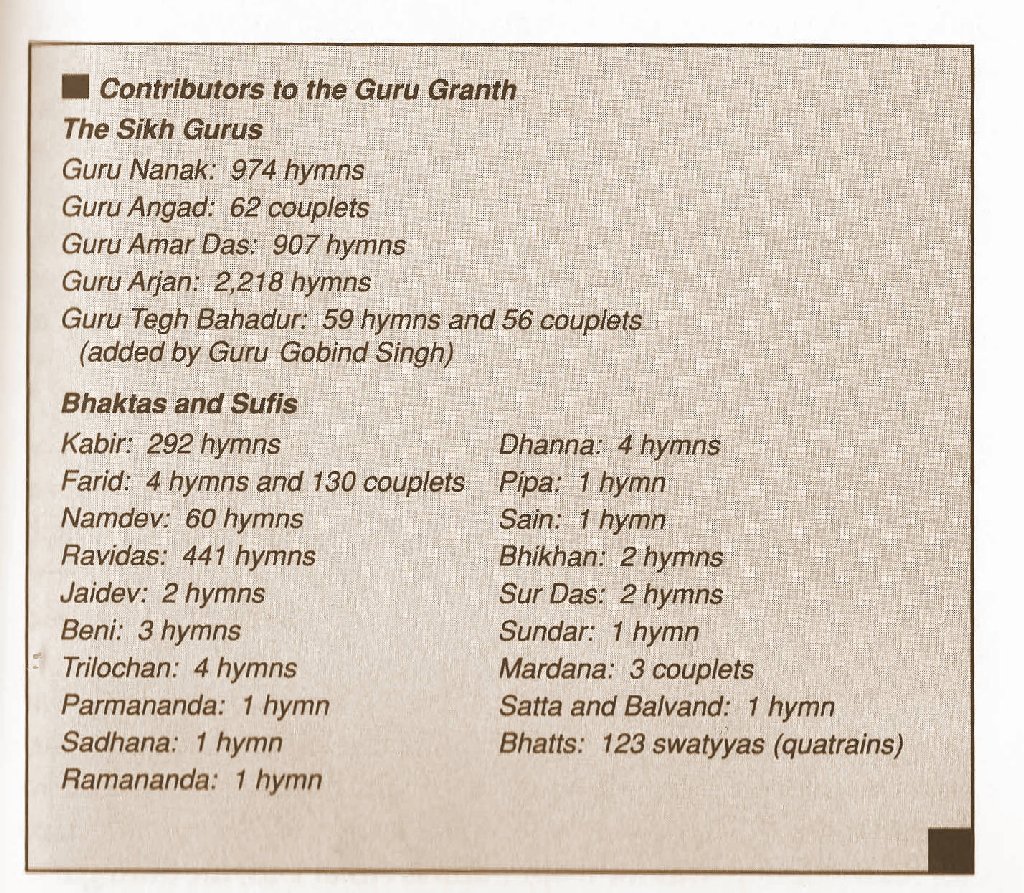 For instance, the first raga is Sri, which means "supreme." It is a basic melody pattern from which others are derived.

The Sikhs compare Sri to the ‘philosopher's stone’.  Sri is sung in the evening, the time of advancing darkness. The hymns in the Sri pattern express a great yearning for the Divine.

Within each of the thirty-one sections of the Guru Granth, Arjan arranged the compositions in a particular order. First came the works of the earlier gurus in the order of their succession.

Since all of the gurus had signed their poems ‘Nanak’, Arjan distinguished them by using the word Mahalla, which means "body," and a number. Thus, poems headed Mahalla 1 were the work of the first guru, those headed Mahalla 2 were the work of the second guru, and so on. This designation symbolized the belief that each guru shared the spirit of Nanak in his body. After the gurus' poems, Arjan placed the works of a number of Hindu saints and one Muslim, Sheikh Farid. 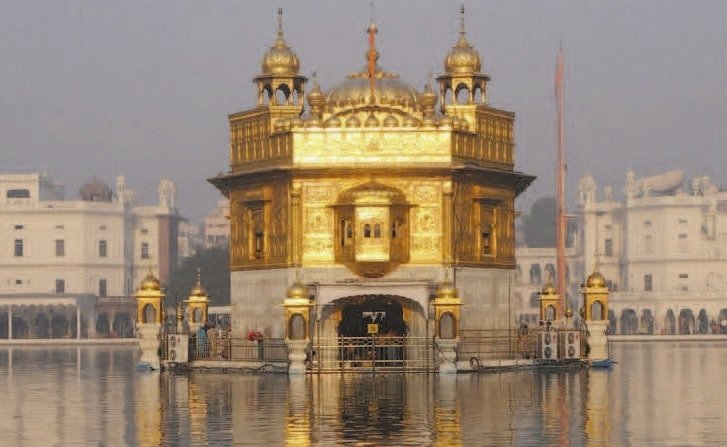 The Golden Temple at Amritsar

The completion of the Guru Granth was an occasion of great celebration.

On August 16th 1604, Sikhs travelled for miles to witness the colourful procession that would bear the sacred volume to Harimandir, the temple at Amritsar.

An elderly and much respected Sikh folIower, Bhai Buddha, carried the Guru Granth on his head, whilst Arjan walked behind, holding a whisk over the holy book to shade and protect it. Musicians played hymns from its pages. Observers likened the atmosphere to that of a joyous wedding. 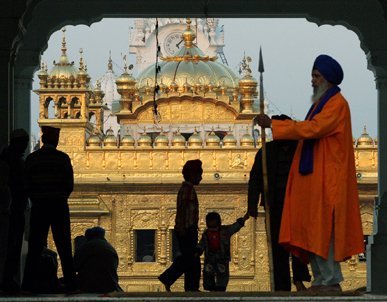 Once inside, Bhai Buddha reverently opened the Guru Granth to obtain the hukm, or Divine Command, while Arjan stood in attendance. At dusk, the Guru Granth was taken to a special chamber and placed on a pedestal. Arjan remained with it, sleeping on the floor by its side to show the esteem in which he held it.

This original Guru Granth is preserved today at Kartarpur, the town founded by Nanak.

Thus, during Arjan's time, the Sikhs acquired both a sacred space in which to worship and a sacred text to guide them. Both helped to mold the Sikhs' consciousness of themselves and their faith. The Golden Temple at Amritsar provided a central place for gathering and worship. The Guru Granth gave the Sikh message concrete form. Their holy book not only became their spiritual and religious guide, but it also shaped their intellectual and cultural environment. 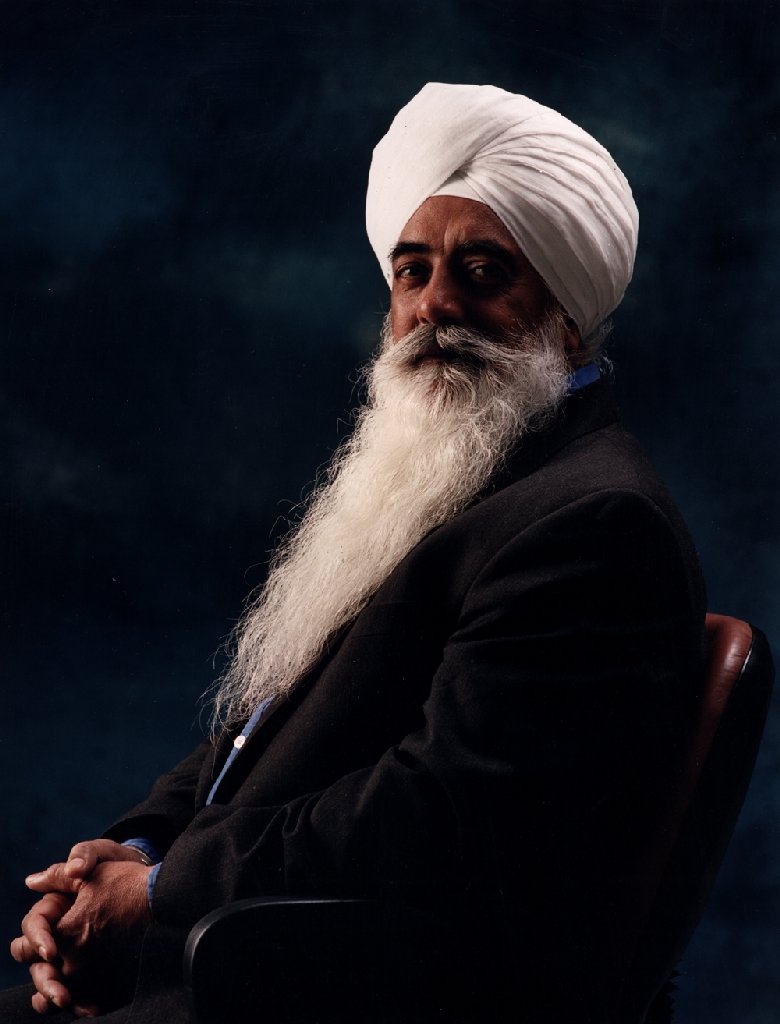 About 100 years later, in 1708, the tenth guru Gobind Singh decreed that from then on there would be no more gurus.  The Granth would be the only guru.  Since then the focus of Sikh teaching and prayer has been the Guru Granth.

Sikhs greatly revere this holy book and turn to it for inspiration and guidance on a regular basis.  It is still used in religious ceremonies and to celebrate births and marriages, or at funerals.

The Guru Granth opens with the numeral one. It is the first word of the first statement of Guru Nanak:

Literally "One Reality ls," or "There is only one Reality”.  These first three words are the fundamental affirmation of Sikhism. The Guru Granth then describes the Reality, its relation to the world, and its relation to the people of the world. Overall, the Guru Granth contains no historical narratives and no biographical details. It provides no dogma. It prescribes no code of behaviour and lists no obligations. The Sikh holy book is composed entirely of spiritually exalted poetry. Its theme is the individual's longing for the Ultimate Reality.

The Guru Granth ends with the Mundavani, the seal, or final word, of its compiler, Guru Arjan:

On the platter lie arranged three delicacies:
Truth, contentment, and contemplation . . .
All who eat them, all who savor them
Obtain liberation.

Material for this section was derived from the excellent introduction to Sikhism by Nikky Guninder Kaur Singh.

Mood according to Wikipedia