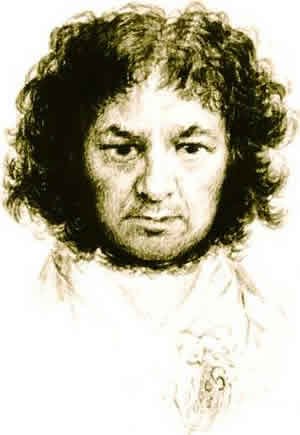 Francisco José de Goya y Lucientes ( 30 March 1746–16 April 1828) was a Spanish  painter and printmaker regarded both as the last of the Old Masters and the first of the moderns. Goya was a court painter to the Spanish Crown, and through his works was both a commentator on and chronicler of his era.

The famous painter Francisco Goya y Lucientes (1746-1828) suffered during his life one or several diseases, the nature of which has not been determined with certainty.

At age of 46, Goya suffered from severe illness that lasted a few months. It caused loss of vision and hearing, tinnitus, dizziness, a right-sides paralysis, weakness and general malaise. Although he recovered from a cerebral stroke which accompanied it, the deafness remained unaltered. The illness divides Goya's artistic life into two great different periods.

After it the painter produces his greatest works.

The visual experience after the illness was heightened by the exclusion of acoustics stimuli and the artist's talent rose to the highest level. His character became more withdrawn and introspective and his entire vitality was directed to his painting. Goya's painting became progressively more gloomy and satirical during his long convalescence.

The artist suffered a stroke at age 73 that again rendered him paralysed on the right side. The precise cause of his illness has long been debated. Some medical writers have favoured the diagnosis of syphilis, some consider the possibility of an exogenous psychosis, and other suggests that the symptoms of the illness are more congruent with heavy metal poisoning, particularly lead. It is interesting to speculate how the Goya's deafness influenced the artist's mentality and the changes of his painting. Interesting is also the problem of the sensory compensation in fact of disturbance of physiological function of one of the senses.