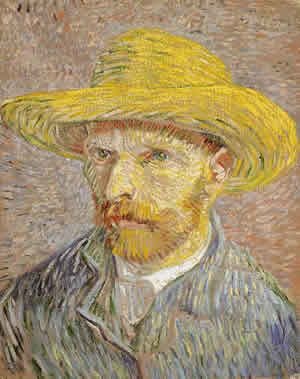 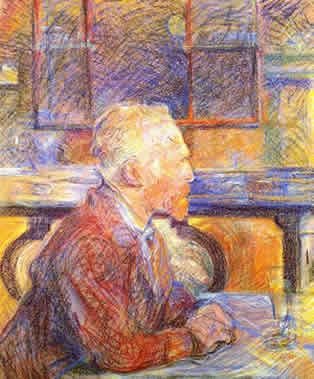 Vincent Willem van Gogh  (1853 –1890) was a Dutch post-Impressionist painter whose work, notable for its rich colours, energetic style and flamboyant brush strokes had a far-reaching influence on 20th-century art.

After years of painful anxiety and frequent bouts of mental illness, he died aged 37 from a gunshot wound, generally accepted to be self-inflicted. His work was then known to only a handful of people and appreciated by fewer still.

Van Gogh began to draw as a child, and he continued to draw throughout the years that led up to his decision to become an artist.   He spent his early years working for a firm of art dealers, traveling between The Hague, London and Paris, after which he taught for a time in England. One of his early aspirations was to become a pastor and from 1879 he worked as a missionary in a mining region in Belgium where he began to sketch people from the local community. In 1885, he painted his first major work The Potato Eaters.

This painting is characteristic of his early work being somewhat dull, although the style is recognisable.  The colours are muted and drab and the composition fairly traditional.  Technically he was not that good, his figures are rather clumsy and cartoon like - almost grotesque.

In March 1886, he moved to Paris and discovered the French Impressionists.  But what I also think he discovered was absinthe.  I and a number of other people appear to believe that Van Gogh became addicted to absinthe and in the longer term it made him mentally ill – it damaged his brain, as absinthe does.

Vincent van Gogh and the thujone connection - Arnold WN
Department of Biochemistry, University of Kansas Medical Center, Kansas City 66103.
During his last two years Vincent van Gogh experienced fits with hallucinations that have been attributed to a congenital psychosis.
But the artist admitted to episodes of heavy drinking that were amply confirmed by colleagues and there is good evidence to indicate that addiction to absinthe exacerbated his illness.
Absinthe was distilled from an alcoholic steep of herbs. Wormwood (Artemisia absinthium) was the most significant constituent because it contributed thujone. This terpene can cause excitation, convulsions that mimic epilepsy, and even permanent brain damage.
Statements in van Gogh's letters and from his friends indicate that he had an affinity for substances with a chemical connection to thujone; the documented examples are camphor and pinene. Perhaps he developed an abnormal craving for terpenes, a sort of pica, that would explain his attempts to eat paints and so on, which were previously regarded as unrelated absurdities.
PMID: 3054185

If he ate the paints he would have also suffered from heavy metal poisoning as all the paints at that time contained heavy metals - lead, cadmium, mercury, and so on.

As the brain damage worsened, his paintings actually became more and more inspired. Many of his best-known works were completed during the last two years of his life. In just over a decade, he produced more than 2,100 artworks, consisting of 860 oil paintings and more than 1,300 watercolours, drawings, sketches and prints. His work included self portraits, landscapes, still lifes, portraits and paintings of cypresses, wheat fields and sunflowers.  Thus we have the hint of mania in his level of output and indeed a number of psychiatrists have posthumously said he developed manic depression.

Later, he moved to the south of France and was influenced by the strong sunlight he found there. His work grew brighter in colour, and he developed the unique and highly recognizable style that became fully realized during his stay in Arles in 1888.

The extent to which his mental health affected his painting has been a subject of speculation since his death. Most art critics do not want to attribute his genius to manic depression or absinthe, but given that most artistic geniuses are mentally ill, he would not be alone and it is not a condemnation to say he was.

There is the added speculation that his condition was made worse by further medication for the epilepsy he experienced.  So we have absinthe poisoning, heavy metal poisoning, epilepsy, brain damage, manic depression and digitalis poisoning.  Poor man.

Van Gogh's vision. Digitalis intoxication? - Lee TC.
Vincent van Gogh, the Dutch postimpressionist painter, died in 1890. He was an uncommon man.
Automutilation, depression, insanity, and suicide are part of his medical history.
During the last few years of his life, his paintings were characterized by halos and the color yellow. Critics have ascribed these aberrations to innumerable causes, including chronic solar injury, glaucoma, and cataracts.
Van Gogh may have been under the influence of digitalis intoxication and its side effects: xanthopsia and coronas. This hypothesis is based on his twice having painted his physician holding a foxglove plant; that this medicine was used in the latter part of the 19th century in the treatment of epilepsy; and that the toxic effects of digitalis may have, in part, dictated the artist's technique.
PMID: 7007674