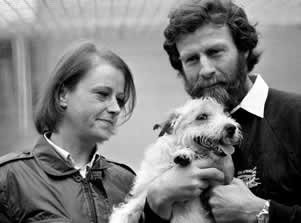 Sir Ranulph Twisleton-Wykeham-Fiennes, 3rd Baronet, OBE (1944), is a British adventurer and holder of several endurance records. He is also a prolific writer.

Fiennes served in the British Army for eight years including a period on counter-insurgency service while attached to the army of the Sultanate of Oman. He later undertook numerous expeditions and was the first person to visit both the North and South Poles by surface means and the first to completely cross Antarctica on foot.

In May 2009, at the age of 65, he climbed to the summit of Mount Everest. According to the Guinness Book of World Records he is the world's greatest living explorer. Fiennes has written numerous books about his army service and his expeditions as well as a book defending Robert Falcon Scott from modern revisionists.

Fiennes married his childhood sweetheart Virginia ("Ginny") Pepper on 9 September 1970. The extent of her support for him was so great that she was the first woman to receive the Polar Medal. The two remained married until her death from stomach cancer in February 2004.