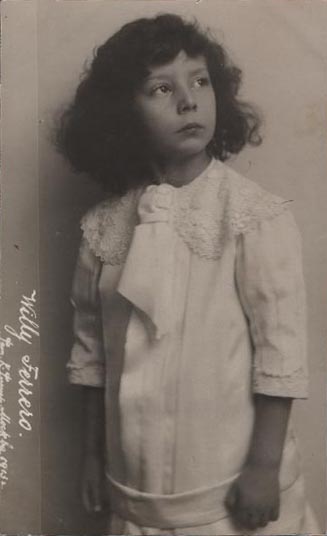 Willy Ferrero was a child prodigy.  Born William Ferrero in America (21 May 1906 - March 23, 1954), he started as a conductor and became a  conductor and composer.  He is of interest to the site because Gabriel Delanne in his book  Materials for use in the Study of Reincarnation studied where this ability came from - was he a reincarnated conductor or musician, for example, or did he simply have unusual functional ability?

Michelangelo had not finished wearing out his first trousers as his master Ghirlandajo sent him out of the workshop, having nothing more to teach him. At the age of 2, Henri de Heinecken spoke three languages. At the age of 4, Baptiste Raisin showed a rare virtuosity on the violin. At the age of 6, Mozart composed his first concert.

Today, it is Willy Ferrero who amazes Paris with the assuredness, concentration and the artistry with which he conducts the orchestra in the Revue des Folies-Bergères.

Willy Ferrero, was born in Portland USA to a mother and father who were both theatrical and musicians, described as ‘two circus jugglers’, Vittorio Ferrero and Nerina Moretti, … “his parents said that at one year old he was already remembering long songs and rushing onto the stage to greet the audience after the act his mom and dad had played”.   One suspects here, that there might be some problems with parental pride and concatenation of time, as most children cannot walk at one year old, let alone ‘rush onto the stage’. [more discussion of this is in the summary]. Nevertheless there is indeed considerable evidence that he was a remarkable prodigy. 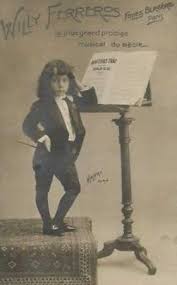 He was taken back to Italy by his parents at the age of 2, his grandmother lived in Turin.  But he ended up conducting in Paris.  He directed several symphonic pieces at the Trocadero in Paris, for example, at the age of 3 years, 8 months. The great composer Massenet was among those who assisted at this concert and moved to the point of shedding tears, he kissed the tiny director and exclaimed, “Go, you are a born artist. Of you history will certainly speak”. At the age of 4 he led the orchestra in the Folies-Bergères in Paris. And by the age of 4 ½ he was able to conduct the orchestra of the Folies-Bergères with ‘remarkable skill and mastery’.  The major Parisian press, ‘usually so skeptical’, praised him for his abilities.

A tiny little fellow no higher than that; he is already cheerfully wearing the black suit, the satin trousers, the white vest and the varnished shoes of the conductor.  With a monocle in his eye, and the baton in his hand, he leads an orchestra of 80 musicians with incomparable clarity and precision, attentive to the smallest detail, concerned about nuances, he is a scrupulous observer of rhythm.

During a trip to the Midi the other day, Mr. Clément Bannel discovered this little prodigy, became enthusiastic about such a musical instinct, and brought the child back to Paris, which he won yesterday evening, during the Revue des Folies-Bergères. Willy Ferrero conducted with the skill of Souza, Sylvia, Léo Delibes, then our National Caroline, etc., etc., etc., etc..... It was a dazzling success. [translated from the French]. 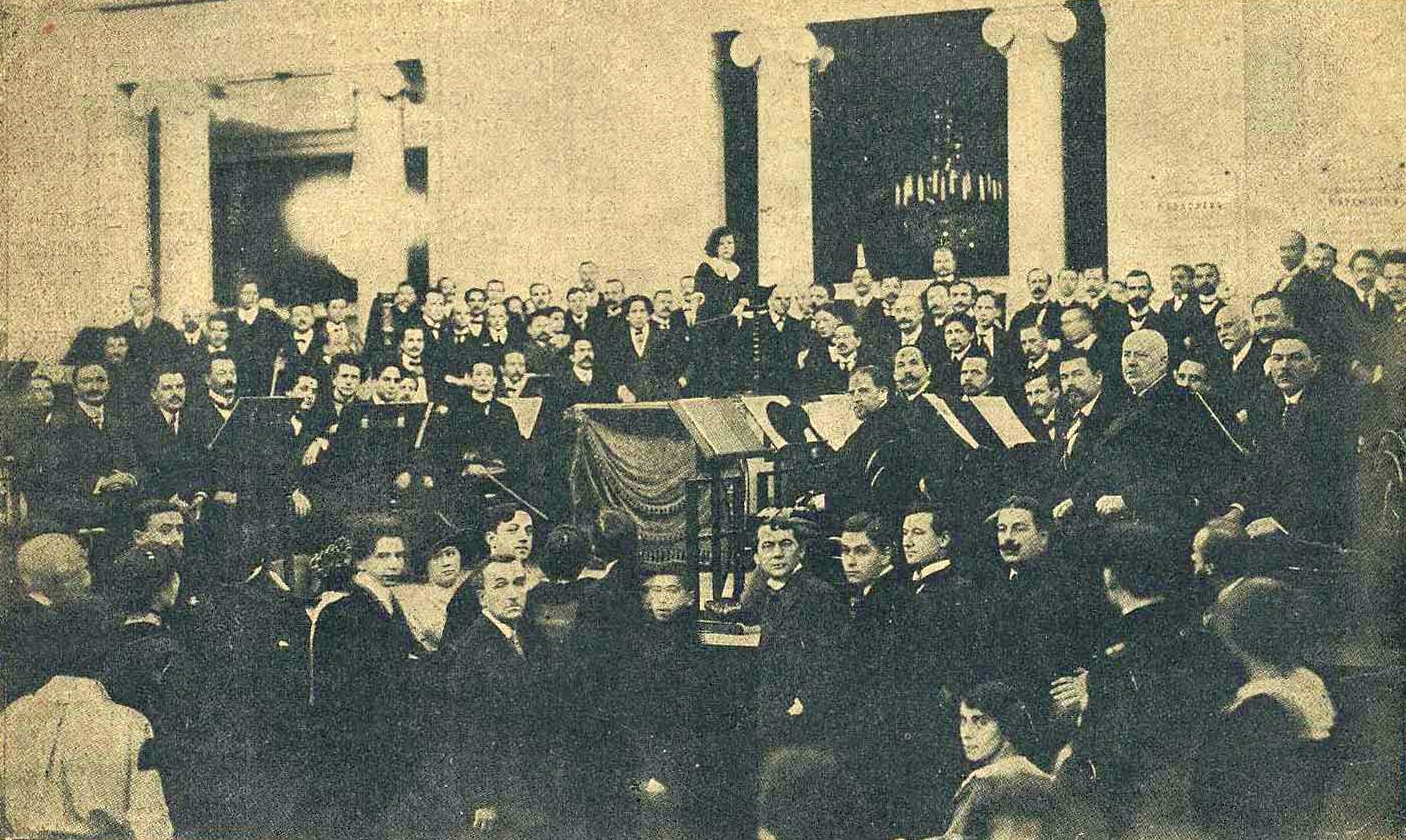 Willy can just be seen next to the second column from the right, a tiny little boy with a very big baton, standing on a table 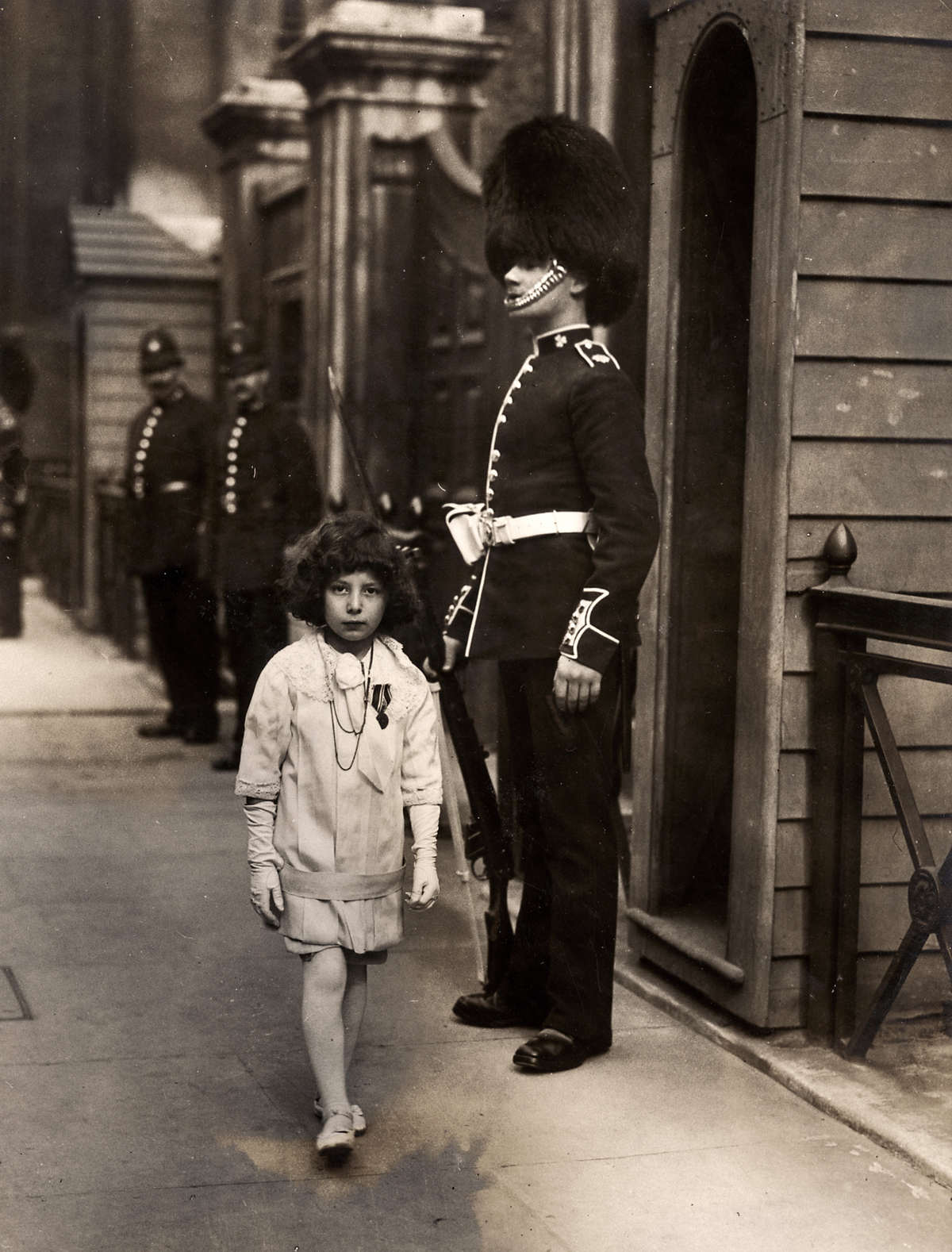 On October 11, 1912 (age 6 years), he directed his first symphonic concert in Rome at the Teatro Costanzi. On February 11, 1913, he directed the Imperial Orchestra of 120 performers at St. Petersburg at the invitation of His Majesty the Tzar of Russia, Nicholas II, and was given the ensign of the Order of St. Stanislaus, a gold medallion and other valuable presents. He went on to conduct with great success throughout Europe. In 1914 [aged 8] he directed the orchestra at the Albert Hall in London; was decorated by Queen Alexandria and was presented with a Gold Medal by the Italian Minister of Education after successful appearances in the Augusteum, where he conducted an orchestra and chorus of 500. In 1913 he was invited to the Vatican by Pope Pius X, and again in 1917 by Pope Benedict XV, and was presented by him with a large medallion.

Five years, not even five years. Long, curly brown hair, the chubby face of a little Boucher [the painter]'s love. Our friends saw him at the Trocadero conducting his orchestra with imperturbable composure, and amazing authority.

I saw him at his parents' house in the bright room with its floral wallpaper that he animates with his energy as a healthy child. Nothing in him remains of the child prodigy. He is not in the least infatuated with his merit and he does not even think about it for a moment.

I have placed on my lap the youngest conductor in the world:

"Hey! Tell me a story, will you? - I'm leaving on Monday, I'm happy. I'm going to Turin where I'll see Grandma and then I'll conduct classical concerts, I like it better than waltzes and songs."

- Tell me, what do you prefer of everything you know?

- “I like Haydn's symphony and the Tannhauser March and above all I like Grieg's Anita's dance. I heard it in Cannes, in a classical concert with Papa and I said: You have to teach me that, Papa; I want to conduct it. And Papa taught me, I'm going to conduct it at the Turin exhibition. I am happy.
Look, Mr. Bannel gave me all these toys to play with in the Folies-Bergères and then these... He is kind... But still, four and a half months in the same music hall is a long haul.”

And after his confidence, the young musician slipped off my knees and went to keep company with a wooden doll. 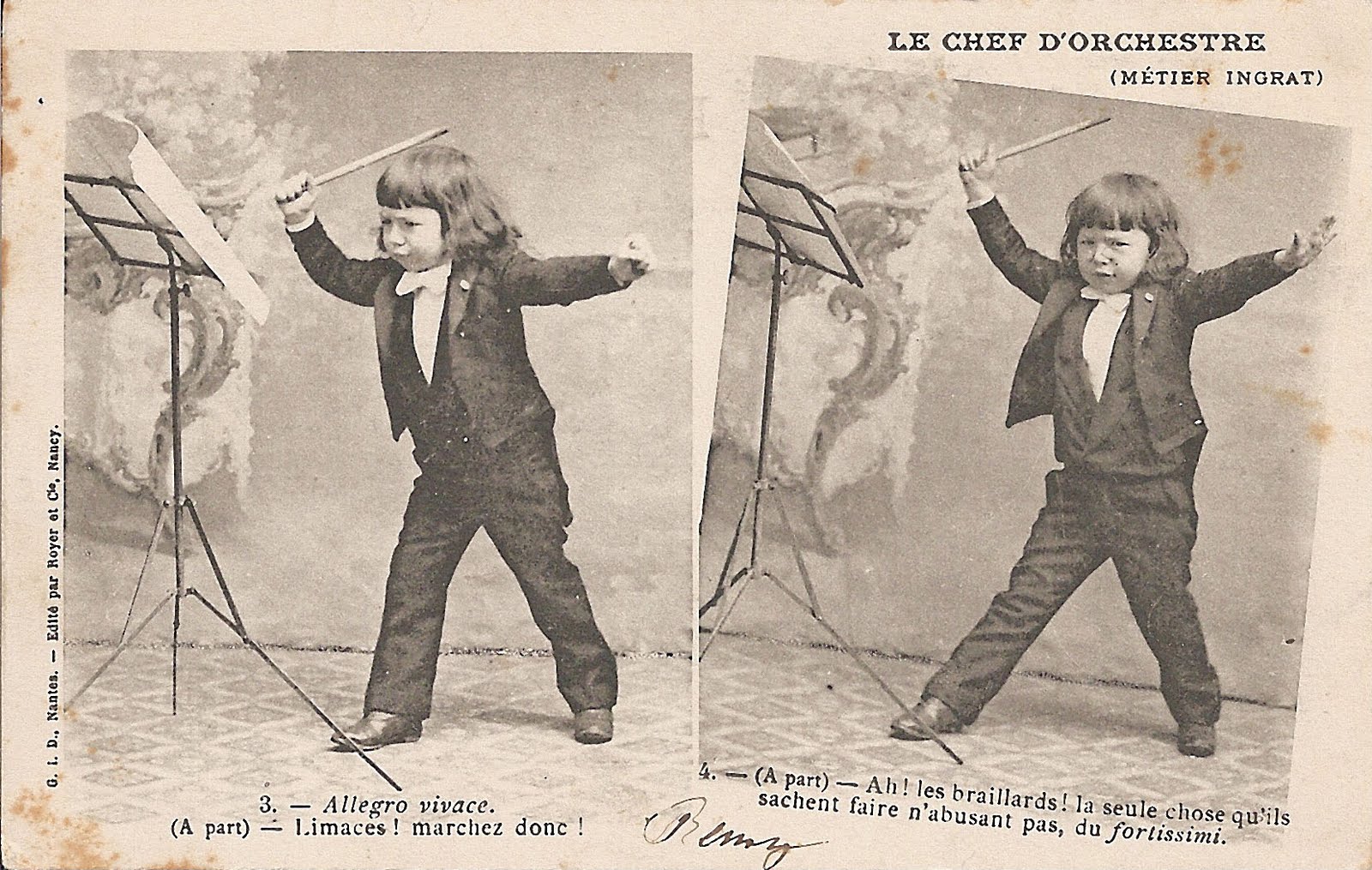 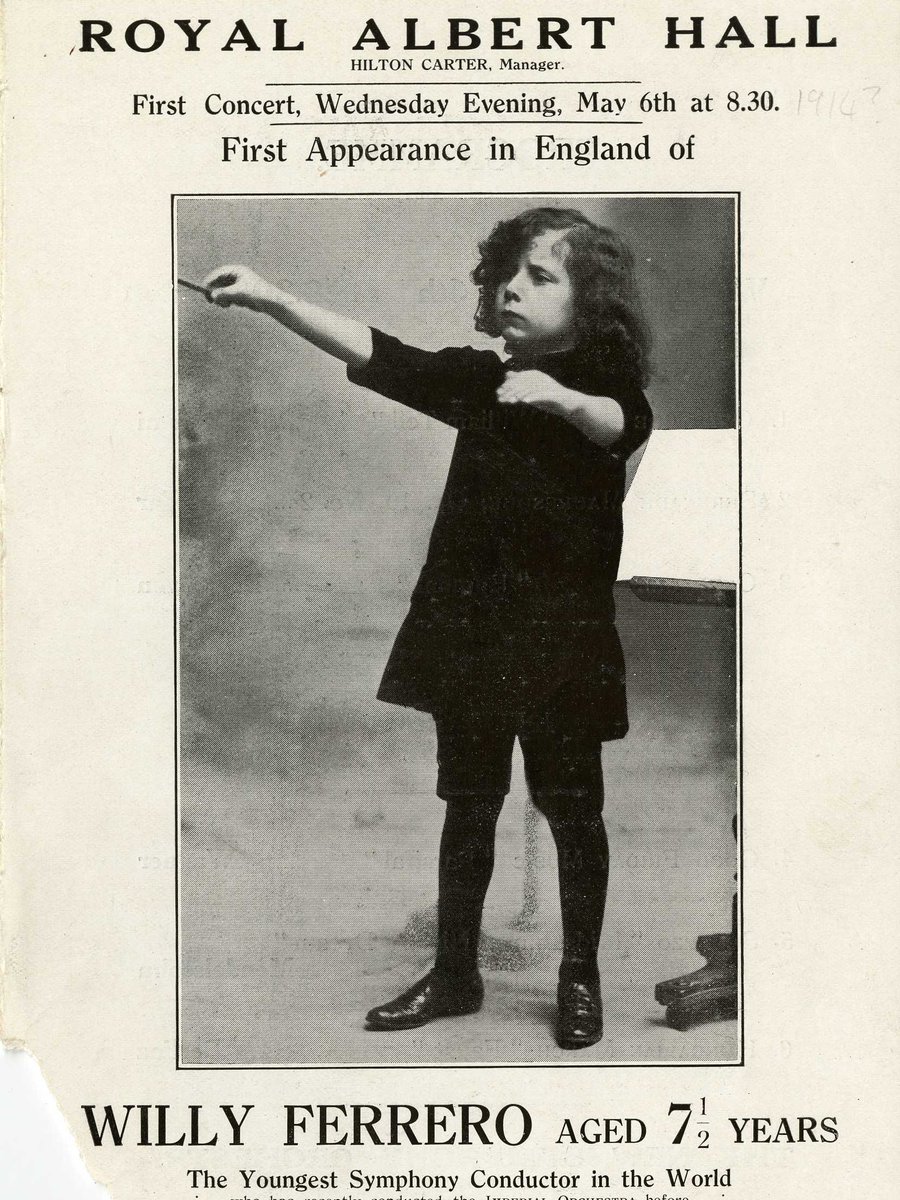 After he had studied at the Vienna Academy of Music (graduated, 1924), Ferrero resumed his career as an orchestra conductor in Italy, performing mainly at the Teatro alla Scala in Milan, but he no longer achieved success as he did during his childhood: ‘many felt that his decline was caused by extensive studies at the University of Vienna’.   Willy Ferrero did not become anything like the genius predicted by Massenet when he said, “Of you history will certainly speak”.  Willy Ferrero resumed his career, appearing as orchestra leader in many of the larger cities of Italy.   He wrote a symphonic poem, II mistero dell' aurora, and some chamber music.  BUT, he never fulfilled his early promise.

His later repertoire included works from different eras and styles, Beethoven, Dvořák, Brahms, Tchaikovsky, Debussy, and Ravel but those from a bygone era.

Willy continued to conduct even after he had become an adult.  In the film Pictura: An Adventure in Art (1951) ,  a documentary film directed by seven directors, and narrated by several famous Hollywood actors, including Vincent Price, Gregory Peck, Henry Fonda, Martin Gabel, and Lilli Palmer, Willy was one of the conductors featured.

The film attempts to give the general film going public a taste of art history and art appreciation, and it won a Special Award at the Golden Globes in 1952.  After a Prologue showing Vincent Price talking to art students, Part 1: is about The Lost Paradise by Hieronymus Bosch (1450-1516) and  Part 2: The Legend of St. Ursula by Vittore Carpaccio (1460-1526), directed by Luciano Emmer; features music by Roman Vlad played by the Orchestra of Santa Cecilia Academy in Rome; conducted by Willy Ferrero.  The narrator was Gregory Peck. 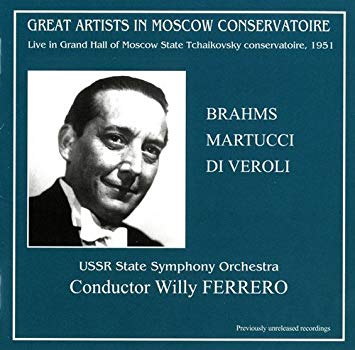 As a musical prodigy he received encomiums [a formal expression of praise] from Leopoldo Mugnone, Mo. Comm.; Sgambati, Director of the Royal Conservatory of S. Cecilia, Rome; Alberto Masco, critic of Tribuna; Prince Sergio Wolskonski, former director Imperial Theatre, St. Petersburg; Glasunof, director Conservatory of St. Petersburg; Prof. L. Auer; Prof. Nicola Solowieff; G. Tartascof, baritone of the Imperial Opera; A. Klessin, director of Imperial Orchestra; Prof. Sokoloff of the Academy of Fine Arts, and many others.  But he drifted into obscurity after he became an adult.

In later years he took part in various public activities, becoming a member of the World Peace Council.
He died relatively young in Rome, Italy aged 47, on March 23, 1954.  His death was due to heart disease.  His body was buried in the cemetery of Ostia Antica.

Was Willy able to tap into a reservoir of unusual functional ability or was he reincarnated?  We think in this case it was neither of the two.  We think he may have been possessed.  As a child he would have been more open to being possessed, but as an adult, far less so and it is telling that after his education at the Vienna Academy of Music, the musical ability stayed, but it progressed no further.  Whoever had possessed young Willy found a suitable candidate, but could advance him no further. 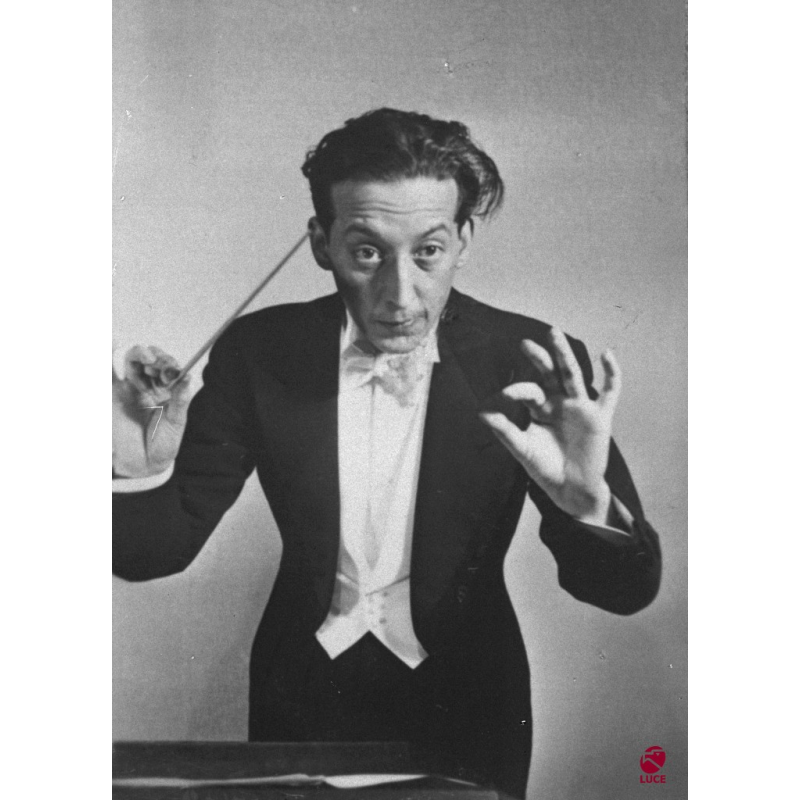 Ferrero, as a child, not yet able to read the music, directed the orchestra by heart.  This too points more towards possession, but with the ability to use his perceptions [possibly a past life record] of music as a guide to the score.  There is another intriguing bit of evidence here.  We saw that his parents claimed Willy could walk at one year old.  By about 8 months of age, infants usually learn to pull themselves up and hold on to a chair, and they often can stand alone by about 10 to 12 months of age, but they can't walk.

Walking upright requires being able to stand up and balance position from one foot to the other. Although infants usually learn to walk around the time of their first birthday, the functions ['programs'] that control the leg alternation component of walking are in place from a very early age, possibly even at birth or before. This is known because 1- to 2-month-olds when given support with their feet in contact with a motorized treadmill, show well-coordinated, alternating steps. If it were not for the problem of switching balance from one foot to the other, babies could walk earlier.

Yet as we read “his parents said that at one year old he was already ..... rushing onto the stage to greet the audience after the act his mom and dad had played”.  Practice has a big part to do with teaching a child how to walk so access to the already learnt function of a possessor may be of interest.

Pure speculation of course and we will not now know the truth, because all this happened a long time ago, but simple reincarnation does not fit the history of Willy, whereas a combination of recall of perceptions [the scores] coupled with possession does - and the possessor could have been alive or dead.