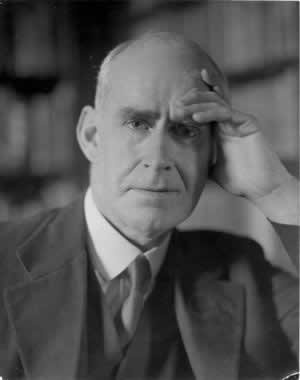 Sir Arthur Stanley Eddington,  (28 December 1882 – 22 November 1944) was an English astrophysicist.  Despite a career entirely devoted to science, his upbringing and overall approach to life was spiritual in nature.  In his books and in his philosophical papers he brings considerable spiritual insight  and dimension to scientific subjects.

Eddington was born in Kendal, England, son of Quaker parents. His father taught at a Quaker training college in Lancashire before moving to Kendal to become headmaster of Stramongate School. He died in the typhoid epidemic which swept England in 1884. When his father died, his mother was left to bring up her two children with relatively little income. The family moved to Weston-super-Mare where at first  Eddington was educated at home before spending three years at a preparatory school.

Eddington  earned a scholarship to Owens College, Manchester in 1898 when he was only 16. He spent the first year in a general course, but turned to physics for the next three years. Eddington lived at Dalton Hall, where he came under the lasting influence of the Quaker mathematician J.W. Graham. His progress was rapid, winning him several scholarships and he graduated with a B.Sc. in physics with First Class Honours in 1902.

Based on his performance at Owens College, he was awarded a scholarship to the University of Cambridge (Trinity College) in 1902. His tutor at Cambridge was the distinguished mathematician R.A. Herman.  In 1904 Eddington became the first ever second-year student to be placed as Senior Wrangler. He received his B.A. in 1905.

After a brief period doing research in the Cavendish Laboratory, Eddington moved in January 1906 -  when he was nominated to the post of chief assistant to the Astronomer Royal – to the  Royal Greenwich Observatory.

He was put to work on a detailed analysis of the parallax of 433 Eros on photographic plates that had started in 1900. He developed a new statistical method based on the apparent drift of two background stars, winning him the Smith's Prize in 1907. The prize won him a Fellowship of Trinity College, Cambridge

In 1913 he returned to Cambridge, when he was appointed the Plumian Professor of Astronomy and Experimental Philosophy. Later that year, Eddington was named the director of the Cambridge Observatory. He was elected a Fellow of the Royal Society shortly after and received a Royal Medal in 1928.  He was President of the International Astronomical Union and President of the Physical Society and the Royal Astronomical Society.

Eddington is perhaps best known to a wider non specialist audience as a scientist who could explain difficult ideas clearly and wittily.

He is most famous for his work regarding the Theory of Relativity.  Eddington wrote a number of articles which announced and explained Einstein's theory of general relativity to the English-speaking world. World War I severed many lines of scientific communication and new developments in German science were not well known in England. He also conducted an eclipse expedition in 1919 that provided one of the earliest confirmations of relativity, and became known for his popular expositions and interpretations of the theory. 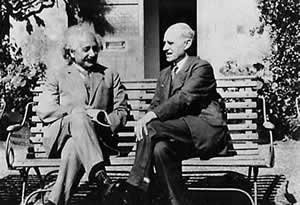 Eddington was also heavily involved with the development of the first generation of general relativistic cosmological models. He had been investigating the instability of the Einstein universe when he learned of both Lemaitre's 1927 paper postulating an expanding or contracting universe and Hubble's work on the recession on the spiral nebulae. He soon became an enthusiastic supporter of an expanding universe cosmology, pointing to the nebular recession as evidence of a curved space-time. However, he never accepted the argument that an expanding universe required a beginning. He rejected what would later be known as Big Bang cosmologies as 'too unaesthetically abrupt.' He felt the cosmical constant must have played the crucial role in the universe's evolution from an Einsteinian steady state to its current expanding state, and most of his cosmological investigations focused on the constant's significance and characteristics.

In the book which I have used ‘The Expanding Universe’, Eddington draws on a number of sources.  The book was based on a lecture he gave in September 1932

‘This is an International Conference and I have chosen an international subject.  I shall speak of the theoretical work of Einstein of Germany, de Sitter of Holland, Lemaitre of Belgium;  for observational data I turn to the Americas – Slipher, Hubble, Humaso, recalling, however, that the vitally important datum of distance is found by a method which we owe to Herzsprung of Denmark.  As I must not trouble you with mathematical analysis, I have to pass over Levi Civita of Italy, whose methods and ideas we employ.  But I must refer especially to the new interest which arises in the subject through its linkage to wave mechanics, as a representative name in wave mechanics, I mention that of its originator de Broglie of France’