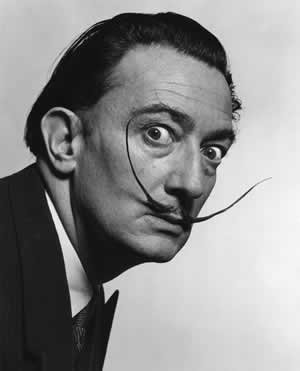 Salvador Domingo Felipe Jacinto Dalí i Domènech, 1st Marqués de Dalí de Pubol ( 1904 – 1989), known as Salvador Dalí was a surrealist painter born in Figueres, Spain [Surrealism is just extreme symbolism, paintings which are nothing but symbols in their entirety with no attempt to give them a realistic edge]. He also created films, sculpture, and photographs, wrote books including his autobiography, and designed theatre sets, clothes and furniture.  Two of his most well known objects are Lobster Telephone and Mae West Lips Sofa, completed by Dalí in 1936 and 1937, respectively.

And he designed an entire Tarot card pack.

Dali had a  "love of everything that is gilded and excessive, a passion for luxury and a love of oriental clothes".  He was also, or at least liked to project the image of being, eccentric.  Dalí grew a flamboyant moustache, said to have been influenced by 17th-century Spanish master painter Diego Velázquez. The moustache became an iconic trademark of his appearance for the rest of his life.  But his moustache, like all of his paintings, was symbolic - the twin horns  - and in this picture he has even posed for us with staring and bulging eyes to give us a few more clues.

Unlike many artists he achieved fame, even a little notoriety, during his life and it was his showmanship that gained him this publicity.  Dalí was introduced to America, for example,  by art dealer Julien Levy in 1934. The exhibition in New York of Dalí's works created an immediate sensation. A specially organized "Dalí Ball" was held and he showed up wearing a glass case on his chest, which contained a brassiere [androgyny].  In 1936, Dalí took part in the London International Surrealist Exhibition. His lecture, titled Fantômes paranoiaques authentiques, was delivered while wearing a deep-sea diving suit and helmet. He had to have the helmet unscrewed as he gasped for breath. He commented that "I just wanted to show that I was 'plunging deeply' into the human mind."

He was also extremely clever in managing the difficult relationship with his fellow surrealists most of whom had leftists views and expressed them to the very patrons who might have bought their work.  Dali did not.  He “insisted that surrealism could exist in an apolitical context”.   In his 1970 book Dalí by Dalí, Dalí declared himself to be both an anarchist and monarchist.  Dalí's patrons included the very wealthy Edward James who purchased many works and supported him financially for two years;  and Gabrielle Coco Chanel who invited him to stay in her house on the French Riviera where he painted numerous paintings.

So Dali was no hair brained dippy artist, he was astute, clever and had a whopping sense of humour.  In 1939, André Breton gave him the nickname "Avida Dollars", [avide à dollars, meaning "eager for dollars"].  There was just the hint of jealousy amongst fellow surrealists.  They accused him of 'self-aggrandizement through fame and fortune'. But then they would wouldn't they?

Despite the surreal and hugely symbolic nature of his work, he was a skilled technical painter capable of life like images as well as imaginary ones. Dali was interested in numerous styles of painting - Dada, the work of Pablo Picasso,  Joan Miró, Raphael, Bronzino, Francisco de Zurbarán, Vermeer, and Velázquez and so on.  All this he absorbed and used, but his style was uniquely his own. He used both classical and modernist techniques, sometimes in separate works, and sometimes combined.

Dalí  experimented with many unusual or novel  processes. Many of his works incorporated optical illusions, negative space, visual puns, and trompe l'oeil visual effects. He also experimented with pointillism, enlarged half-tone dot grids (which Roy Lichtenstein would later use), and stereoscopic images. He was among the first artists to employ holography in an artistic manner.

What is perhaps not well known is just how full of symbolism his paintings are.  I would have classified him more as a symbolist rather than a surrealist, but I suspect he chose the latter as it gave more scope for theatrical gestures.  According to Dalí, the rhinoceros horn signifies 'divine geometry' because it grows in a 'logarithmic spiral'.  In other words he knew the symbolism of the horn, the spiral, the  cone and the gyre. He also linked the rhinoceros to themes of chastity and to the Virgin Mary.

Which rather neatly brings us on to the question of where he got his inspiration from – and it wasn't chastity.  This was a joke.

Much of the trauma in Dali's life occurred when he was young.  When he was five, Dalí was taken to his brother's grave and told by his parents that he was his brother's reincarnation.  Images of his long-dead brother would reappear embedded in his later works, including Portrait of My Dead Brother (1963).  In February 1921, Dalí's mother died of breast cancer. Dalí was 16 years old; he later said his mother's death "was the greatest blow I had experienced in my life. I worshiped her... I could not resign myself to the loss of a being on whom I counted to make invisible the unavoidable blemishes of my soul."

Dalí was also violently thrown out of his paternal home on December 28, 1929. His father told him that he would be disinherited, and that he should never set foot in Cadaqués again.

I think these events opened the figurative spiritual door.  So how did he keep it open?

Dali's inspiration appears to have been achieved not via unrequited love or grief or angst or any of the other emotional traumas which seem to affect many artists, but by love, true love.  There is also an indication that he gained his experiences via all the various forms of sexual technique – making love, sexual stimulation, sex magick, love with visualisation – but not chastity!  Another  method he used was relaxation – I have incorporated one of his  techniques on the website.

Who did he love?

In August 1929, Dalí met his lifelong and primary muse, inspiration, and future wife Gala, born Elena Ivanovna Diakonova. She was a Russian immigrant ten years his senior, who at that time was married to surrealist poet Paul Éluard.

The following summer, Dalí and Gala rented a small fisherman's cabin in a nearby bay at Port Lligat. He bought the place, and over the years enlarged it, gradually building his much beloved villa by the sea. For anyone who has ever been, they will know what I mean when I describe it as the perfect safe house.  I would have happily lived there, it is serene.  They lived there for their entire time together, only broken in 1940, as World War II tore through Europe, when Dalí and Gala retreated to the United States, where they lived for eight years. 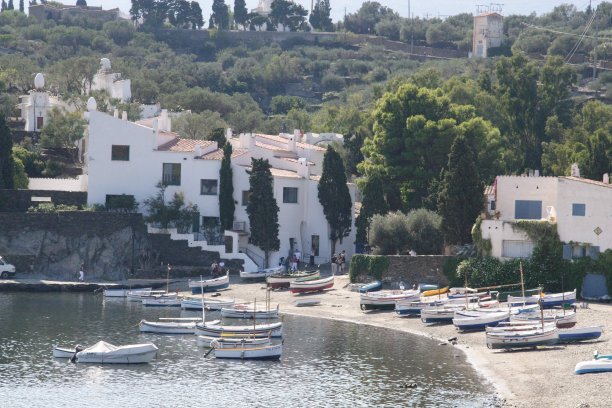 Dalí and Gala, having lived together since 1929, were married in 1934 in a semi-secret civil ceremony. They later remarried in a Catholic ceremony in 1958. In addition to inspiring many artworks throughout her life, Gala would act as Dalí's business manager, supporting their extravagant lifestyle while adeptly steering clear of insolvency. Gala seemed to tolerate Dalí's dalliances with younger muses, secure in her own position as his primary relationship. 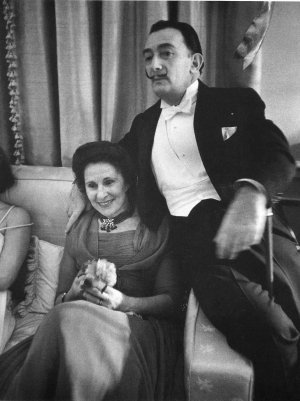 And his other dalliances were indeed interesting.  At a French nightclub in 1965, Dalí met Amanda Lear. According to Lear, she and Dalí were united in a "spiritual marriage" on a deserted mountaintop.   Lear took the place of an earlier muse, Ultra Violet (Isabelle Collin Dufresne).  So all a little surreal! 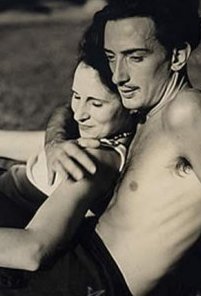 Gala and Dali at Cadaques.

But Dali loved Gala.  He continued to paint Gala as they both aged, producing sympathetic and adoring images of his muse. The "tense, complex and ambiguous relationship" lasted over 50 years

Read his biographies and they will tell you he was interested in science and religion and 'became an increasingly devout Catholic'.  But I do not believe this is true.

I think he became more and more spiritually attuned.  "Nuclear Mysticism" included such notable pieces as  The Hallucinogenic Toreador (1968–70). This surely should be a clue.  The elephant is also a recurring image in Dalí's works. It first appeared in his 1944 work Dream Caused by the Flight of a Bee Around a Pomegranate a Second Before Awakening [lucid dreaming].  The egg is another common Dalíesque image,  it appears in The Great Masturbator [peaking]and The Metamorphosis of Narcissus. In 1931, Dalí painted one of his most famous works, The Persistence of Memory, which introduced a surrealistic image of soft, melting pocket watches – clocks.  So in other words, memory does not persist, perceptions do.

Leda Atomica  depicts "a painter's easel, three cats, a bucket of water, and Dalí himself floating in the air "– out of body. Then there was the film, Impressions of Upper Mongolia (1975), in which he narrated a story about an expedition in search of giant hallucinogenic mushrooms.  So maybe he used these too – or maybe not.

He couldn't have been more explicit about his beliefs and source of spiritual experience if he tried.

When interviewed by Mike Wallace on his 60 Minutes television show, Dalí kept referring to himself in the third person, which means that he probably also knew of the Aleister Crowley technique of denial of self.

In 1980, Dalí's health took a catastrophic turn. His near-senile wife, Gala, allegedly had been dosing him with a dangerous cocktail of unprescribed medicine that damaged his nervous system, thus causing an untimely end to his artistic capacity. At 76 years old, Dalí was a wreck, and his right hand trembled terribly, with Parkinson-like symptoms.

Gala died on June 10, 1982, at the age of 87. After Gala's death, Dalí lost much of his will to live. He deliberately dehydrated himself, and tried other means of dying but people kept 'saving' him, not for entirely unselfish motives.  In November 1988, Dalí entered the hospital with heart failure.  On January 23, 1989, while his favorite record of Tristan and Isolde played, he died of heart failure at  the age of 84.

I have used Dali's paintings throughout the site principally to illustrate the symbol section, but I have also provided a few here to show the symbolism employed.  You can spend hours over one painting trying to spot all the symbols he incorporated, it is a very enjoyable pastime, a sort of artistic 'where's wally'. 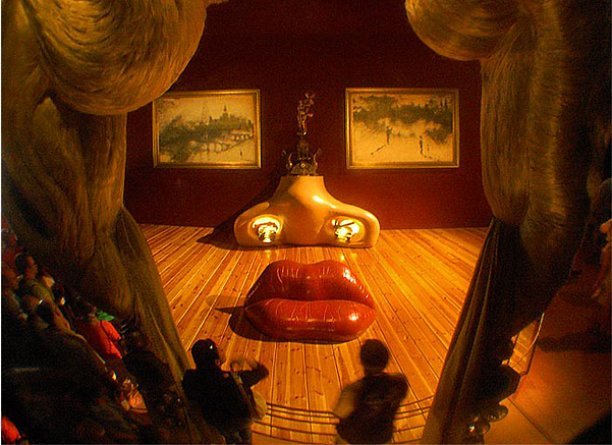 The Mae West sofa in the Dali Museum.