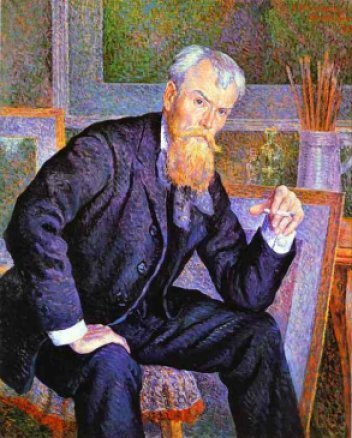 A portrait of Cross by Maximilian Luce.

Henri-Edmond Cross  (20 May 1856 – 16 May 1910) was a French painter and printmaker.  He is classified in textbooks as an ‘anarchist’, but this word totally fails to conjure up the sentiments he and his fellow painters – Signac and Pissarro for example – believed in.  Life was becoming gradually more controlled and regimented in the late 1800s with more obligations, more restrictions and an increasing complexity.  All of these factors worked against creativity and spirituality and Cross and his fellow painters, writers and poets wanted to return to a world in which there was less control – a more utopian society.  In 1896, Cross created a lithograph, L'Errant (The Wanderer) which rather summed up his desire to be free of this restrictive burden. The work was featured anonymously in Les Temps Nouveaux, Jean Grave's ‘anarchist’ journal. Cross's sentiments influenced his choice of subjects. He painted scenes illustrating the world he longed for, an idealistic world free of constraints and artificial rules, morals and formality.  His paintings are full of nude women in the open air - a sort of return to Dionysian bliss.

His paintings are simply stunningly beautiful.  He painted Light and his paintings give the impression of someone who is constantly experiencing pure or enhanced perception.  He tried to capture the shimmering beauty that accompanies this form of experience by using dots of colour [called Divisionist painting in academia].  Cross's paintings of the early- to mid-1890s are painted using closely and regularly positioned dots of colour [academia has invented a name for this too -  Pointillism], but as his technique matured he saw that the same effects he wanted could be achieved using little squares of colour, blocks created using a broadish brush, with small areas of unpainted canvas [or canvas that had only been primed] to create the vibrant shimmering light filled effect he wanted. 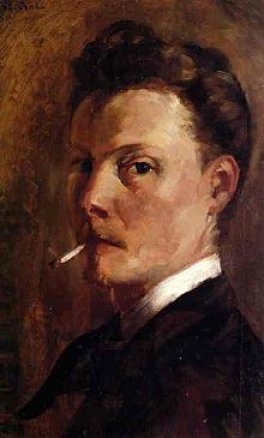 At the time he painted there were a number of theories of colour being proposed both in science and in the artistic world [for example the colour wheels]  and Cross appears to have known about them, as he is adept at using colour contrasts and colour complements.
Cross stated that he was "far more interested in creating harmonies of pure colour, than in harmonizing the colours of a particular landscape or natural scene."
If we put this another way, realism was never intended, the intention was to produce an impression of what he had seen.

His method involved capturing the essence of the scene using watercolour or coloured pencil images in his sketchbooks and then using these notes back in the studio. He wrote of a rustic French outing:
"Oh! What I saw in a split second while riding my bike tonight! I just had to jot down these fleeting things ... a rapid notation in watercolour and pencil: an informal daubing of contrasting colours, tones, and hues, all packed with information to make a lovely watercolour the next day in the quiet leisure of the studio."

Cross was born Henri-Edmond-Joseph Delacroix in Douai, a commune in the Nord département in northern France. He had no surviving siblings. His parents were French adventurer Alcide Delacroix and the English Fanny Woollett.  In order to distinguish himself from the painter Eugène Delacroix, Henri changed his name in 1881, shortening and Anglicizing his birth name to "Henri Cross".

His parents and Alcide's cousin, Dr. Auguste Soins, recognized Henri's artistic talent and were very supportive of his artistic inclinations. He studied at the École des Beaux-Arts and in 1878, and then enrolled at the Écoles Académiques de Dessin et d'Architecture, studying for three years in the studio of Alphonse Colas.

Cross's early works, portraits and still lifes, however, reflected this academic training and were ‘in the dark colours and style of Realism’.  In 1884, Cross co-founded the Société des Artistes Indépendants, which consisted of artists unhappy with the practices of the official Salon and it is through this group that his style evolved.  Other members of the group included Georges Seurat.  The change from his early, sombre, Realist work was gradual. His colour palette became lighter and he started to paint outside.  In about 1886, attempting again to differentiate himself from another French artist – this time, Henri Cros – he again changed his name, finally adopting "Henri-Edmond Cross".

In 1891, Cross exhibited his first large piece using the technique he had evolved.  The painting was a portrait of Madame Hector France, née Irma Clare, whom Cross had met in 1888.  Robert Rosenblum wrote that "the picture is softly charged with a granular, atmospheric glow". Cross eventually married Madame France in 1893.  So LOVE was clearly one driver to his work.

But there are other influences.  He smoked – and he smoked a lot, until eventually from a combination of smoke and the lead in paints he started to suffer from rheumatism.  He also moved to the South of France in 1891 in an attempt to both help his rheumatism and capture the beautiful light there.  He settled in the small hamlet of Saint-Clair near Lavandou, and spent the remainder of his life there, leaving only for Italian trips in 1903 and 1908, and for his annual Indépendants exhibits in Paris.

Galerie Druet in Paris mounted Cross's first solo exhibition, in 1905, featuring thirty paintings and thirty watercolors. The show was very successful, receiving critical acclaim, and most of the works were sold. Belgian Symbolist poet Emile Verhaeren, wrote:
"These landscapes ... are not merely pages of sheer beauty, but motifs embodying a lyrical sense of emotion. Their rich harmonies are satisfying to the painter’s eye, and their sumptuous, luxuriant vision is a poet's delight. Yet this abundance never tips into excess. Everything is light and charming ..."

Cross began to experience troubles with his eyes in the early 1880s, and these grew more severe in the 1900s. He also increasingly suffered from arthritis. At least in part due to these health issues which plagued him for years, Cross's body of work is relatively small. However, in his last years he was productive and very creative, and his work was featured in significant solo exhibitions; he received great acclaim from critics and enjoyed commercial success.

In 1909, Cross was treated in a Paris hospital for cancer. In January 1910 he returned to Saint-Clair, where he died of the cancer just four days short of his 54th birthday.