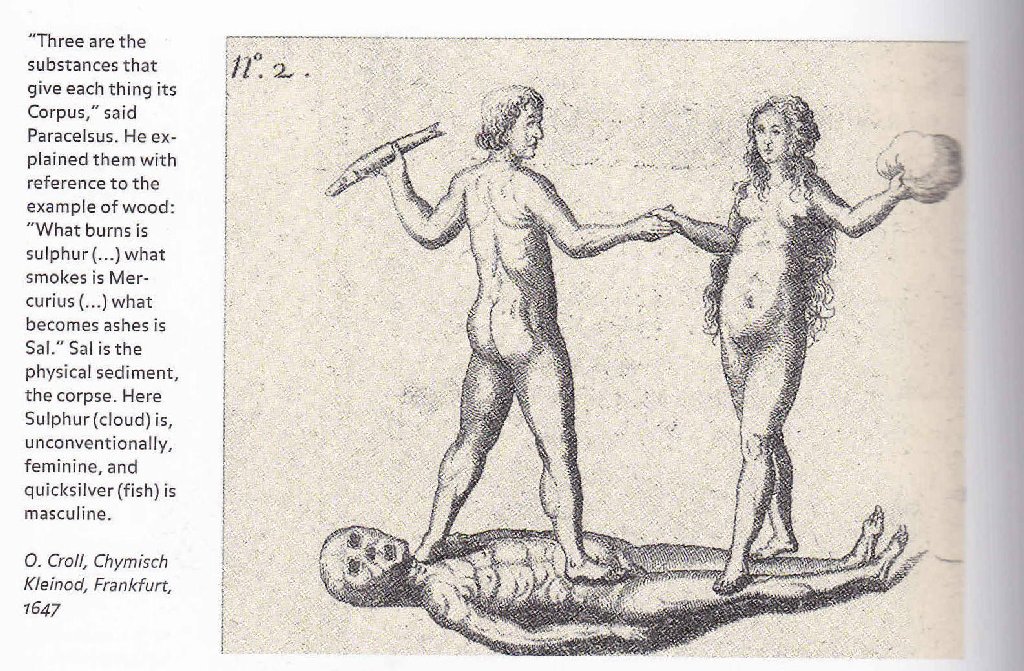 The comment comes from a book on Alchemy, but Croll could simply be showing
that the masculine being the intellect is the source of ideas [fish] and the feminine
is the source of creativity [clouds and bubbles], so not alchemical symbolism,
but accurate symbolism nonetheless

Oswald Croll or Crollius (c. 1563 – December 1609) was an alchemist, and professor of medicine at the University of Marburg in Hesse, Germany.

A strong proponent of both spiritual alchemy and healing alchemy [using plants in medicine], he was heavily involved in writing books and influencing thinkers of his day.

As a spiritual alchemist, Croll was clearly a practitioner, as his writing shows, but his use of symbolism was often not alchemical, leading one to assume he was on the spiritual path, but used it principally to help him with his medicinal and healing beliefs.  His destiny was thus as a healer.

Croll received his doctorate in medicine in 1582 at Marburg, then continued studies at Heidelberg, Strasburg, and Geneva. After working as a tutor, he arrived in Prague in 1597 under the patronage of Rudolf II. He remained there for two years, and again from 1602 until his death. 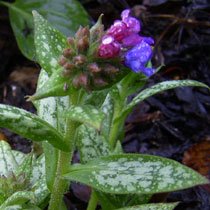 Under the patronage of Rudolf II, his work appears to have flourished and in 1608, Croll's opus magnum "Basilica Chymica" ("Chemical Basilica") was first published, self-described as containing ‘a philosophick description’, confirmed by the experience of [Croll's] own labours, and ‘application of the choicest chymical remedies drawn from the light of Nature and of Grace’. It is a hefty summary of his researches, methods of preparation, and studies into medicine.

The theory of signatures

In 1609 his treatise "De signatura rerum" ("Treatise of signatures") was published. The theory of signatures was based on the idea that all Nature was based on forms [the physical] that were animated by spirit and function.  By looking at the form of a thing one should at least be able to deduce some of its functions. 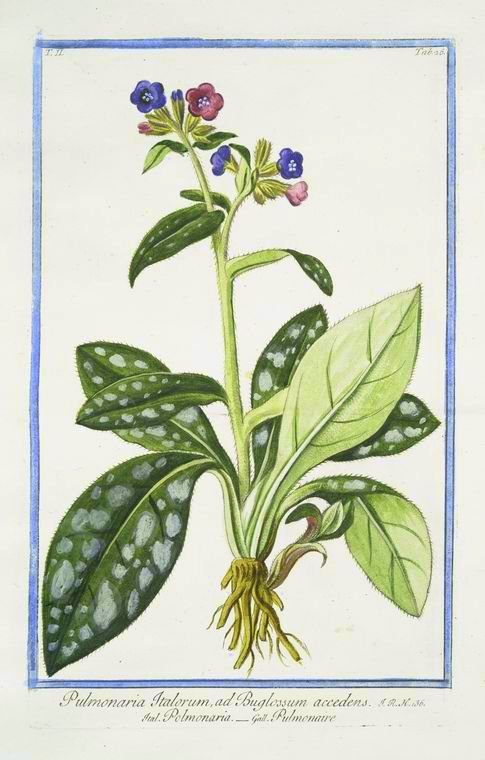 Many current award winning designers use much the same theoretical basis when they design an object.  The most beautiful design is one which reflects its function, thus these designers are mimicking Nature in providing a form which matches function – the Theory of Signatures.

Many alchemists at this time were interested in how far this theory applied to the healing power of plants and herbs.  Could one deduce what healing potential a plant had by its form?  One could deduce a plant was a climbing plant, or a flowering plant, or a ground covering plant, for example, but would its appearance also help in determining the role it might have in medicine?  Some strange theories were proposed in this, but without the analysis techniques we now have to determine the actual chemicals in a plant, it was often very difficult for healers to test whether they were right.

The Lungwort plant, for example, has leaves which look like a lung – hence its common name – thus one theory espoused was that it may, just may, be a clue that it helps in lung diseases. 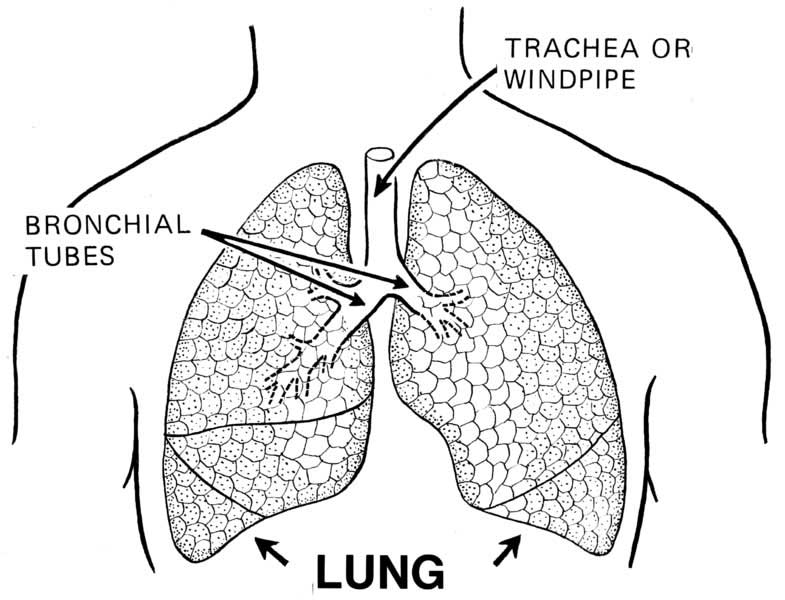 This all assumes that the design was geared towards healing us, but in all spiritual based systems, plants were considered allies of man.  Whilst ‘fairies’ [plant systems and functions] could be made our helpers, Dwarfs [Mineral systems and functions] were a little dodgy and ambivalent.  Elves, which archetypically represent [among other things]  the systems of fungi , could be either seriously evil or useful.  The archetypes thus represented  their helpfulness to man and plants – fairies – were, on the whole, our helpers.

At one time, we helped the fairies by managing plants - broadcasting their seeds, ridding them of diseases and nurturing them – irrigating them and providing them with nourishment [for example manure and compost].

Thus it is not wrong to hypothesise that the form of a plant may hint at its function.  If plants and herbs are our ‘allies’, their form may be helpful to us - a clue.

At the moment, Pulmonaria appears to help those with blood clots and 'thick blood', but since blood clots on the lung are killers, the 'clue' may not be at all invalid.

The theory of signatures - location 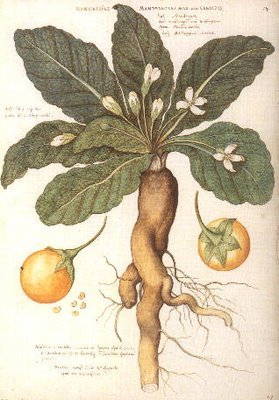 The other areas in which the Theory of Signatures was concerned was whether the plants in a particular location could be applied to the diseases prevalent at that location.  In effect, because plants are our allies, the diseases from the bacteria, fungi, viruses and parasites at that location, were more effectively treated by the plants that had arisen where these pathogens had originated.  Again, the theory is very sound, as since Nature is an integrated system, there is every reason to believe that local plants help cure local illness.

In order to show the validity of this theory, I have juxtaposed some current research work on local plants and their efficacy with some of Croll’s findings.  Only now are researchers beginning to realise that so called ‘folk memory’ of the uses of plants in treating disease is often very reliable.  Here, however, is but one example of a paper that supports Croll in his assertions, it is worth noting that ethnobotanists at the moment are doing a truly wonderful job at trying to document this

BACKGROUND:  Access to useful plants is a growing problem in Africa, increased by the loss of natural vegetation and the erosion of traditional knowledge. Ethnobotany contributes to promote these indigenous knowledge. Despite the large diversity of ethnic groups in Côte d'Ivoire, few ethnomedicine researches have targeted these groups. Among the great Akan group, the Ehotile people are one of the smallest and oldest ethnic group around the Aby Lagoon. The goal of this study was to analyze the level of knowledge and use of medicinal plants by the Ehotile people, and moreover, contribute to build a database about useful plants of first Ivorian people.

METHODS:    Two sets of surveys were conducted in four Ehotile villages: a house-to-house freelist interview and an individual walk-in-the woods interview with some key informants identified by the community. Frequency of citation, Smith's index, Use value and Informant Consensus Factor were used to estimate the local knowledge of medicinal plants.

RESULTS:   Medicinal plants are widely used by Ehotile people. Some were used in addition to modern prescriptions while for some disorders commonly called "African diseases" only plants are used. 123 species employed in the treatment of 57 diseases were listed. Specifically, the most common indications included malaria, sexual asthenia, troubles linked to pregnancy, dysmenorrhoea and haemorrhoids. Analysis of freelists suggested that Ehotile people have a good knowledge of medicinal plants and the most salient included Harungana madagascariensis, Alstonia boonei, Ocimum gratissimum and Xylopia acutiflora. Regarding the consensus among key informants, ICF values were low (<0.5), however category of infectious and parasitic diseases obtained the best agreement (ICF = 0.42). Following the local experts, 4 types of plants availability were distinguished: Abundant plants easy to collect, abundant plants difficult to harvest, scarce plants and endangered plants.

CONCLUSIONS:  Despite the virtual disappearance of natural formations in Ehotile land, medicinal plants are important in the Ehotile health system. Medicinal plants are known and used alone or in addition to medical prescriptions to treat several ailments. However, some of them are becoming rare, and it is feared that this scarcity will result in the inevitable loss of associated knowledge and practices. 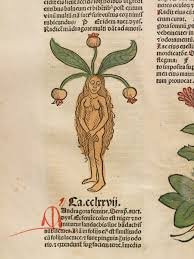 Croll died suddenly in 1609. His reputation and influence grew after his death.

An emblematic seal dedicated to him appears in this work alongside the motto:

Oswald Croll of Wetter, Disciple of the Philosophers: This knowledge is nothing but the secrets of wise teachers and Philosophers.