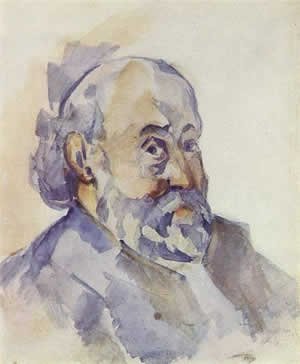 Paul Cézanne (1839–1906) was a French artist and Post-Impressionist painter whose work laid the foundations of the transition from the 19th-century to the new and radically different world of art in the 20th century. His style is unmistakable, strong sweeps of colour, broad brush strokes, angular shapes, a fusion of Impressionism and abstract art. He often depicts figures in the landscape, such as les Baigneuses, but we also find still lifes and portraits. Later in his career, he developed a solidified, almost architectural style of painting. He said "I want to make of impressionism something solid and lasting like the art in the museums".

Cézanne was born in Aix-en-Provence, in Provence in the South of France. He left Aix for Paris in 1861 to join his school friend Emile Zola and pursue an artistic career. His father was the co-founder of a banking firm that prospered throughout the artist's life, affording him financial security and eventually resulting in a large inheritance of 400,000 francs (£218,363.62) . 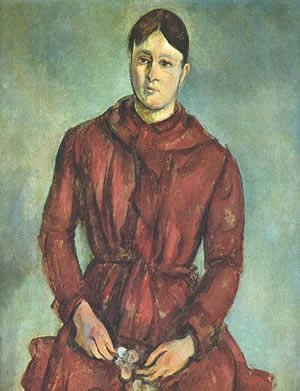 I'm afraid Cezanne appears to be yet another artist who suffered from lead poisoning and he was also affected by absinthe. He was described as rude, shy, angry, and given to depression, by his contemporaries in Paris. Some of his early works show real anger. Works during this dark period include several violent subjects, such as The Rape (c.1867), and The Murder (c.1867–68), which depicts a man stabbing a woman who is held down by his female accomplice. In Paris, Cézanne met the Impressionist Camille Pissarro. Over the course of the following decade, their landscape painting excursions together, in Louveciennes and Pontoise, led to a collaborative working relationship between them. Thankfully under Pissarro's influence Cézanne began to abandon dark colours [and absinthe] and his canvases grew much brighter. 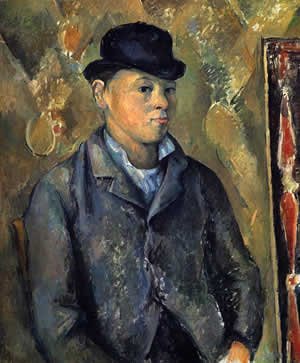 Cézanne had a mistress, Marie-Hortense Fiquet, and a son Paul born in January 1872, but there is no evidence here that she was a major influence. Hortense at one stage lived in the Marseille region, whilst Cézanne moved between Paris and Provence. In the early 1880s, the Cézanne family all moved to Provence together. In 1886, Cézanne married Hortense. For a very short time, the family lived in, Jas de Bouffan, a substantial house and grounds with outbuildings, which afforded a new-found comfort. But this was not to last. His illnesses gradually affected their relationship and they traveled in Switzerland, hoping to restore his health and their relationship. It was not to be.  Cézanne returned to Provence to live; Hortense and their son went to Paris. Financial need prompted Hortense's return to Provence but in separate living quarters. Cézanne moved in with his mother and sister. In 1902, Cezanne drafted a will excluding his wife from his estate and leaving everything to his son. So love I'm afraid was not a driver.

But extreme unhappiness was. Cezanne had to put up with real cruelty from art critics and the public. “Cézanne's exhibited paintings attracted hilarity, outrage, and sarcasm. Reviewer Louis Leroy said of Cézanne's portrait of Chocquet: 'This peculiar looking head, the colour of an old boot might give [a pregnant woman] a shock and cause yellow fever in the fruit of her womb before its entry into the world'." 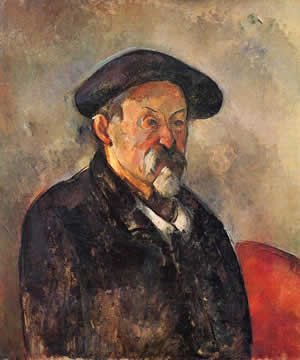 It did not stop there. Cézanne chose to work in the south of France, but this had its downside. Cézanne's paintings were not well received among the petty bourgeoisie of Aix and he lived an isolated existence. In 1903, Henri Rochefort visited the auction of Cezanne's paintings that had been in Zola's possession and published a highly critical article entitled “Love for the Ugly”. In it, he even compared Cezanne to a supposed traitor. “The public in Aix was outraged, and for many days, copies of [the article] appeared on Cézanne's door-mat with messages asking him to leave the town he was dishonouring”

So we have extreme unhappiness, isolation and loneliness, and humiliation as drivers. This was made worse when Cézanne broke off his friendship with Émile Zola, after the latter used him as the basis for the unsuccessful and ultimately tragic fictitious artist Claude Lantier, in the novel L'Œuvre. Cézanne considered this a terrible betrayal and the friendship begun in childhood was irreparably damaged.

From 1890 until his death he was beset by yet more troubling events and he withdrew further into his painting, spending long periods as a virtual recluse. He developed diabetes in 1890. In 1897, his mother died.

One day, in 1906, Cézanne was caught in a storm while working in the field. Only after working for two hours under a downpour did he decide to go home; but on the way he collapsed. He was taken home by a passing driver. His old housekeeper rubbed his arms and legs to restore the circulation; as a result, he regained consciousness. On the following day, he intended to continue working, but later on he fainted; the model with whom he was working called for help; he was put to bed, and he never left it again. He died a few days later, on 22 October 1906 of pneumonia.

After Cézanne died in 1906, his paintings were exhibited in Paris in a large museum-like retrospective in September 1907. Cézanne's explorations of geometric simplification and optical phenomena inspired Picasso, Braque, Gris and many others to experiment with ever more complex multiple views of the same subject and eventually to the fracturing of form. Cézanne thus sparked one of the most revolutionary areas of artistic enquiry of the 20th century, one which was to affect profoundly the development of modern art. A prize in his memory, called the Cézanne medal, is granted by the city of Aix en Provence, in France for special achievement in the arts.

Wikigallery exhibition of his paintings