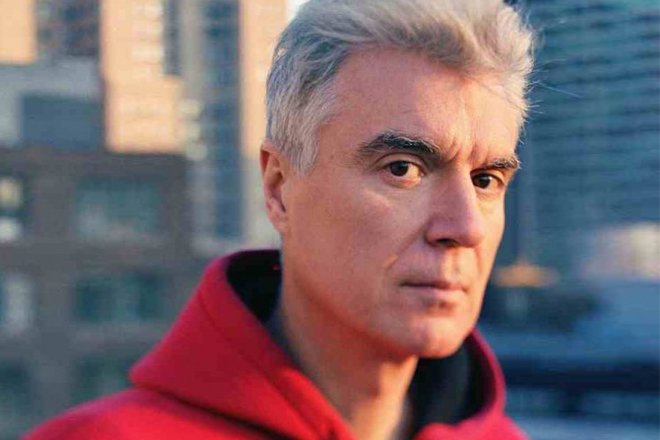 David Byrne (born 14 May 1952) is the founding member, principal songwriter, and lead singer and guitarist of the band Talking Heads, active between 1975 and 1991.  Born in Dumbarton, Scotland, his parents moved to Hamilton, Ontario, Canada, and then to Arbutus, Maryland, in the United States, when he was 8 or 9 years old.  And as a consequence he has lived most of his life in the USA.  Although a resident of the United States since childhood, Byrne is still a British citizen.

After Talking Heads, Byrne has released his own solo recordings, had his own group and has worked with various media including film, photography, opera, fiction, and non-fiction. He has received an Oscar, Grammy, and Golden Globe awards and been inducted into the Rock and Roll Hall of Fame.

Byrne is a multi-instrumentalist, able to play the guitar, accordion, harmonica and violin and is known for his distinctive voice.

When I first moved to NY in the mid 70s I stayed with the painter Jamie Dalglish. In return for room and board I helped him sand the floors and renovate his loft on Bond Street — a stone's throw from CBGB as fate would have it.  I was a peculiar young man — borderline Asperger's, I would guess. Jamie occasionally made large abstract paintings and I wrote what later became Talking Heads songs. 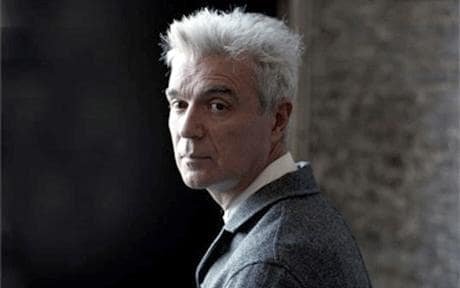 David Byrne has spent his entire life fascinated by the spiritual and metaphysical.

Friday, April 24, 2015 - David Byrne on music, ecstasy and catharsis by Jules Evans [author of Philosophy for Life and Other Dangerous Situations]

I’m researching the history of ecstasy and ecstatic experiences in modern western culture, how spiritual ecstasy got pathologised from the Enlightenment to the present day, and how people found new ways to get out of their heads. 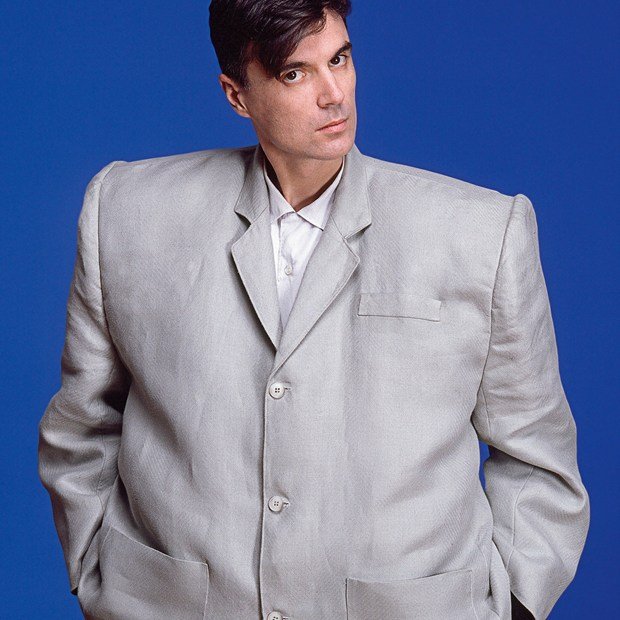 An important part of that story is rock & roll and other forms of pop and dance music, which became in the 20th century a sort of substitute religion and means to ekstasis for the masses. Thanks to rock & roll, white agnostic kids got a way to access the release of ecstatic religion, without any of the ethical or metaphysical dogma.

Someone who has thought about that deeply is David Byrne, the artist, musician, and former lead-singer of Talking Heads. In his music, art and documentaries, he’s explored the different ways humans get out of their heads and into their bodies, or the group, or the unconscious, or the spirit world. He’s also explored the relationship between popular music and various forms of ecstatic religion, from charismatic Christianity to Yoruba and Candomble.

What’s unusual about both him and occasional collaborator Brian Eno, among rockers, is that they combine a critical, intellectual and academic rigour (they once gave journalists a reading list of anthropology and cybernetics to try and improve their interviews) with a willingness for personal and group exploration of ecstatic states. That tension between the self-conscious / intellectual / critical / ironic and the ecstatic is one of the things that makes both their work so interesting – because we’re all longing for ecstasy, but we’re also struggling with our irony, our detachment, our rational skepticism and our emotional inhibition.

Music is its own inspiration for David, but he also a particular fondness for ladies:- 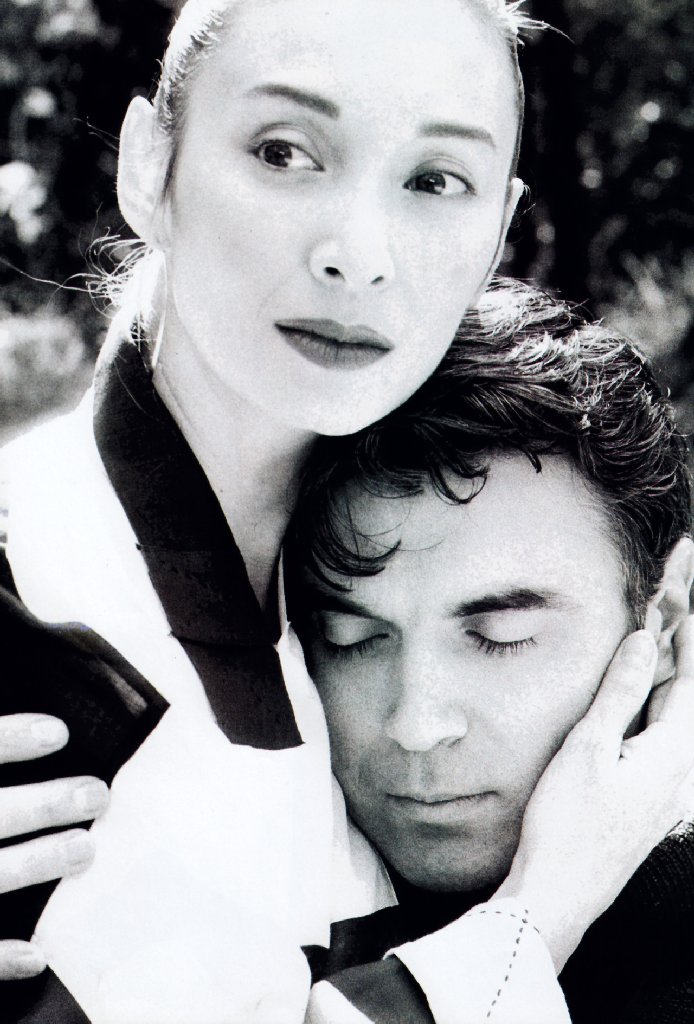 In the 1970s, Byrne had relationships with Andrea Kovacs and Mary Clarke who had attended the Rhode Island School of Design.

He also had a relationship with photographer Lynn Goldsmith in 1980. He had a brief affair with Toni Basil in 1981 and he dated Twyla Tharp between 1981 and 1982.

While visiting Japan in 1982, Byrne met costume designer Adelle Lutz whom he married in 1987. They have a daughter, Malu Abeni Valentine Byrne, born in 1989. Byrne and Lutz divorced in 2004.

After his divorce, he became romantically involved with art curator and Gagosian Gallery sales director Louise Neri. He also had a relationship with the artist Cindy Sherman from 2007 to 2011. 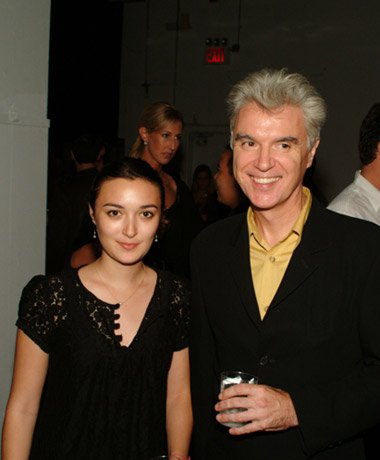 with his daughter Malu

David Byrne lives what he believes.  He is sincere and active in promoting the things he cares about.  His concern for the environment translates into his support of increased cycling, and in order to create an example he uses a bike as his main means of transport and has done throughout his life, especially cycling around New York.  In Los Angeles, Byrne drives a Citroën DS, “noted for its aerodynamic, futuristic body design and innovative technology”.  But in New York he does not own a car.

Byrne says that he began cycling while he was in high school and returned to it as an adult in the late 1970s. He likes the freedom and exhilaration cycling gives him. He has written widely on cycling, including a 2009 book, Bicycle Diaries. In August 2009, Byrne auctioned his Montague folding bike to raise money for the London Cycling Campaign. 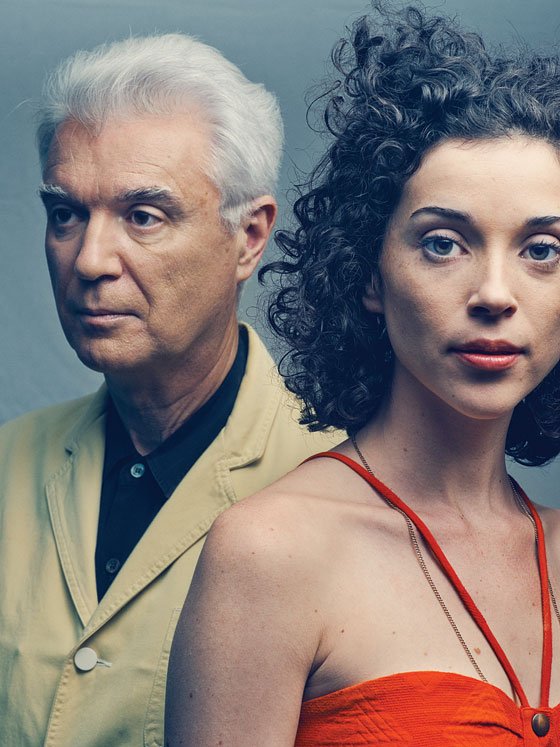 with St Vincent [also on the site]

In 2008, Byrne designed a series of bicycle parking racks in the form of image outlines corresponding to the areas in which they were located, such as a dollar sign for Wall Street and an electric guitar in Williamsburg, Brooklyn. Byrne worked with a manufacturer that constructed the racks in exchange for the right to sell them later as art. The racks remained on the streets for about a year.

Friday, April 24, 2015 - David Byrne on music, ecstasy and catharsis by Jules Evans [author of Philosophy for Life and Other Dangerous Situations]

To what extent would you say that African American-inspired pop music got Western culture out of a ‘dead end’ and gave it a way to find ecstatic release from the iron cage of rationalization?

Wow…that’s some heavy lifting for pop music! But yes, though there were always ecstatic cults in Europe and North America, it would seem the African influence – whether Latin music, Yoruba-inspired spirituality that seeped into world culture, jazz, funk, dancing from the waist down…the renewed appreciation of rhythm and repetition…changed not just Western culture but the whole world’s culture. And I don’t just mean the music.

To be convinced and seduced by ecstasy is to be won over to a new way of looking at the world and oneself. The groove, which in the last 200 years, since slavery, ultimately derives in this form at least, from Africa, is found almost everywhere around the globe now – it’s a species of globalization, but one of joy and integration of body and spirit….

The musical meme is carried by deep and profound work but just as often by hackney’d and cliched pop songs. Any carrier will do, there’s no discrimination. 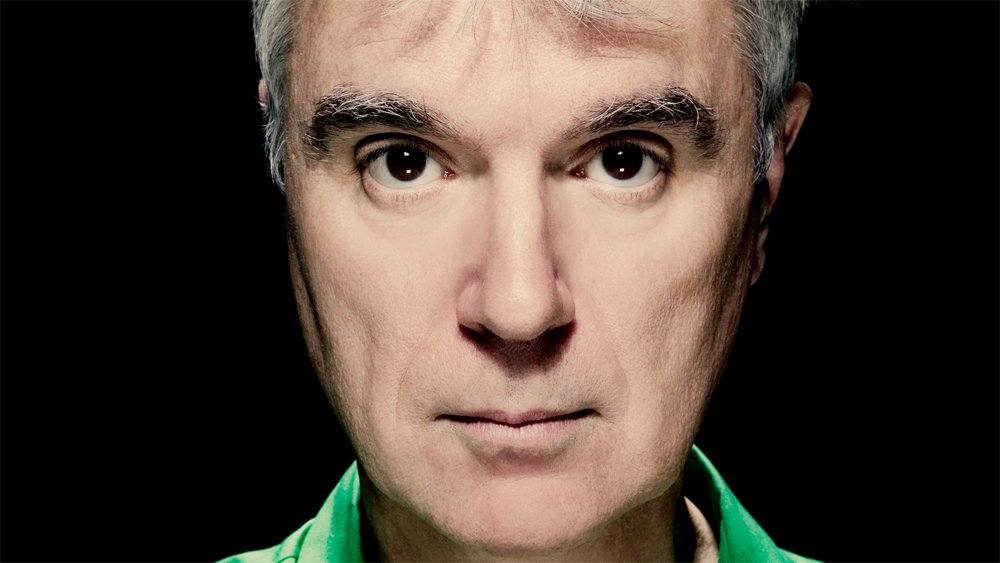